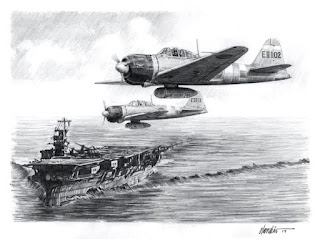 Alvaro César who in August 2013 kindly shared images of his superb build of the Tamiya 1/48 A6M3 Model 22 Zero, has now shared his accomplished and evocative pencil illustration of a pair of A6M2 Zeros from the IJN carrier Zuikaku. EII-102 was flown by F1c Tetsuzo Iwamoto on CAP from Zuikaku during the Pearl Harbor strike. At that time Iwamoto was already an ace from the China campaign with 14 claimed victories and was to make further claims as a carrier pilot over Ceylon and during the Battle of the Coral Sea. After a spell instructing in Japan he returned to operations and fought from Rabaul to Okinawa achieving an estimated 80 victories. He survived the war but died from blood poisoning in 1954.

With thanks to Alvaro for kindly sharing this illustration with Aviation of Japan.

Thanks for sharing, Alvaro & Nick.

A beautiful piece, thanks so much for sharing this.

Thanks for sharing.
Really talented artist.

Such a wonderful drawing which captures the typical CAP scenery over the carriers. Pictures like this always remind me of the beautiful lines of the Reisen.
Thanks also for Iwamoto's career history. How outstanding must his piloting skills, situation awareness, risk assessment and luck have been to survive 5 years of air combat in ever less competitive fighters!

Thanks for letting us see this one, beautifully done.

Alvaro! I had no idea you were a talented artist and skilled model builder! It was great meeting you at the Paine Field Aviation Day a few years back. Keep up the good work.