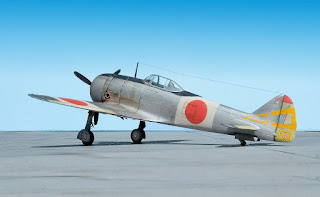 Danilo Renzulli has very kindly shared these images of his splendid 1/72 scale Nakajima Type 2 Tan-sen (二式単戦) Ki-44-II Hei Shoki model made from the Sword Models kit. The model represents aircraft # 63 of the 3rd Chutai of Hiko Dai 70 Sentai at Kashiwa airfield in early 1945 which Danilo interpreted from photographs of the actual aircraft in the excellent 2008 Dainippon Kaiga book 'Shoki Fighter Group - A Pictorial History of the 70th Sentai, the Tokyo's Defenders'. Aircraft # 63 shows evidence on its rudder of former ownership by Hiko Dai 47 Sentai which had transitioned from Shoki to Hayate. By July 1945 the 70th, with 29 aircraft, was one of two Sentai still equipped with the Type 2 Tan-sen within the 10th Air Division as part of the Permanently Stationed Air Defence Forces covering the Eastern District and Tokyo. The other being Hiko Dai 23 Sentai at Imba with 20 aircraft. A third Sentai still with Type 2 Tan-sen as main equipment was the 246th at Taisho within the 11th Air Division covering the Central District with 18 aircraft. Production of the Type 2 Tan-sen had ended with the last two aircraft rolled out in January 1945 from a total run of 1,226. 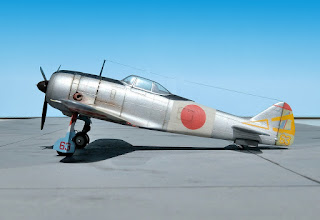 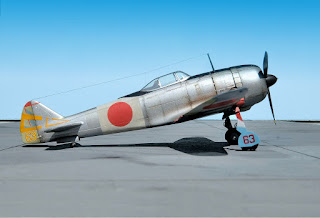 Danilo elected to paint the wing leading edge IFF strips as red from his interpretation of the photograph on page 71 of the book. But he remains uncertain as to whether that might just be a trick of the light. His conclusion was that the pictures of  # 63 do not appear to be from orthochromatic film as the other images of that series would otherwise show the yellow Sentai emblem as a darker shade of grey - almost black. (The night time shot on page 50 of the book seems to confirm the red colour, originally authorised for uncamouflaged aircraft Ed.) 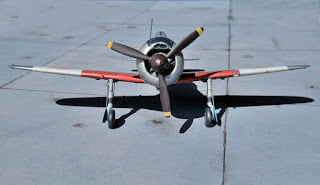 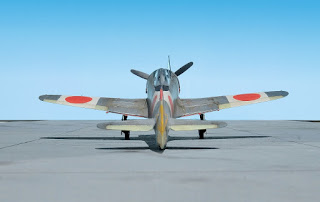 Danilo considers that the Sword kit captures the general lines of 'Tojo' well and offers a good amount of detail. The only obvious error are the undercarriage legs which, according to his calculations, are  1-2 mm. too long in scale resulting in a 'stalky' posture. Danilo didn't correct them as he only noticed it once the legs were fixed to the model which was almost finished. It was too delicate a task to re-work the undercarriage at that stage. 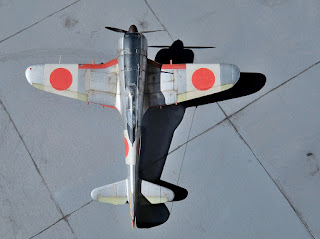 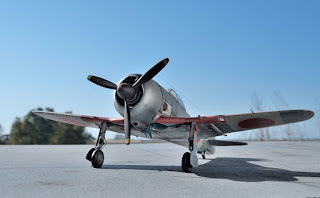 The cockpit was ennhanced with photo-etch details included in the kit while some external details came from a Brengun photo-etch fret. The kit canopy was replaced with a Rob Taurus vacform. Danilo also added red and blue-green navigation lights to the wing tips and white at the tail with tiny drops of coloured Microscale Kristal Klear. 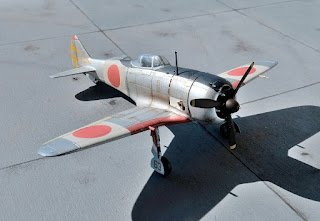 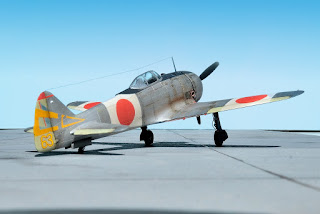 The model was finished in Alclad Semi-matt Aluminium with the other colors from Humbrol. The white color of the Home Defence bands was slightly toned down by adding a tiny drop of brown and blalck to the mixture - just to imitate some weathering. (Try viewing the images in monochrome and note the way that the white bands change in tone compared to the aluminium finish Ed.) The hinomaru and sentai insignia were sprayed using home made masks whilst the numerals came from a Revi decal sheet. 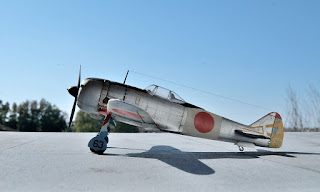 With special thanks to Danilo for sharing these superb images of his Shoki model. The Shoki represented only 9% of total IJAAF fighter production but by the end of the war nevertheless represented 18% of total fighter strength and 31% of the Permanently Stationed Fighter Defence Forces (whereas the Ki-84 and Ki-100 represented 66.5% and 33.5% of the Mobile Air Defence Forces respectively). The last combat fatality of the 70th Sentai occurred on 10 August 1945 when the 1st Chutai leader Captain Kanji Honda was killed in combat over Tokyo with long range Mustangs of the US 15th and 506th Fighter Groups.

Very nice work, Danilo. Thanks for the historical data, Nick.

Great model and history. The red IFF stripes are a nice variation. It's not clear to me when and why they were applied (at random? by Chutai? on 'special' attack aircraft? for unit leaders?) but they befit Danilo's model very well.

Beautiful, and colorful, model of the Shoki. Well done!

Thanks for featuring this kit Nick. Nice job on the subtle and convincing weathering Danilo.

A beautiful build! I do wonder how it compares with the old Hasegawa 1/72nd kit in terms of outline/shape, etc?

Real artistry to weather this model so convincingly in 1/72, Danilo. Beautiful model all round. Thanks to you and Nick for sharing it with us.

Very nice!
The last picture is a good demonstration how white paint sometimes looks dark against aluminium, leading people to guess it may be yellow from black & white photos of similar scenes.