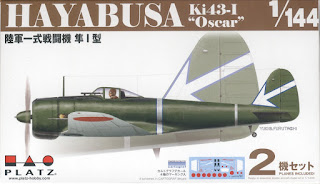 The recent Platz kit of the Nakajima Ki-43-I in 1/144 scale provides two identical sprues to make up two models together with a decal sheet offering four markings options. The kit bears comparison with and should complement the earlier LS kit of the Ki-43-II to the same scale. The LS kit was released in 1976 as a double kit with the Ki-84 Hayate but was most recently available from Arii under the affiliated Micro Ace label. However, examining the two kits together it appears that either the Platz kit fuselage is under scale or the LS kit fuselage is over scale as there is a significant difference between them, especially in the size of the fin and rudder. The dimensions have not been checked against published figures to determine which one is more accurate to scale. 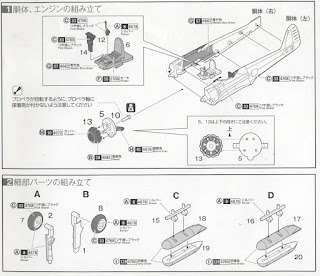 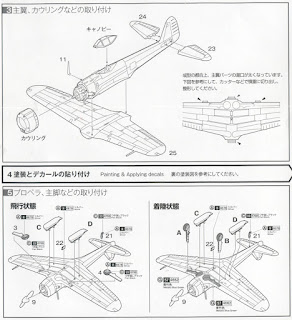 The Platz kit is finely molded in grey plastic and consists of 29 parts including a one piece cockpit canopy in transparent plastic. The parts include cockpit detail absent from the LS kit, consisting of a floor with integrally molded seat, a separate control stick and an instrument panel. The seat is unconvincing even for this scale as the seat back bears little resemblance to the real thing, but the size of the cockpit aperture probably negates that concern. The cockpit colour is called out as metallic blue-green - aotake - with Mr Color 57 or Model Master 4662 suggested. The engine and a firewall with exhausts are separate parts whereas in the simpler 12 part LS/Arii kit the exhausts were molded integrally with the fuselage halves and the cowling and engine were molded as a single piece. The optical gun sight is molded integrally and very neatly with the port fuselage half. The wings of both kits are single piece moldings with integral pitot tubes. In the Platz kit alternative parts are included for an extended undercarriage with separate legs and wheels or a retracted undercarriage with integral one part wheels and covers. The kit also includes under wing racks and drop tanks, the latter each in two parts. The spinner and prop is a single piece, and there is a separate antenna mast, not included in the LS/Arii kit. In both kits the props are designed to spin freely after assembly. 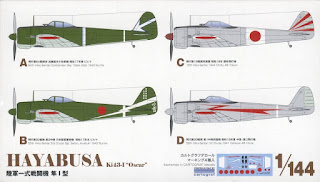 A highlight of the kit is the decal sheet featuring markings for two camouflaged and two natural metal finish aircraft and sharply printed by Cartograf. The two camouflaged options are for 64th Hiko-Sentai commander Tateo Kato's well-known white-striped machine and a 3rd Chutai, 50th Hiko-Sentai example flown by Sgt Satoru Anabuki. The two natural metal options are for an 18th Hiko-Sentai example in 1944 with white Homeland Defence 'bandages', included on the decal sheet, and a 59th Hiko-Sentai aircraft at Hankow, China in 1941 with a large red lightning flash on the fuselage. The sheet includes two anti-glare panels. All four schemes are shown in four-view colour on the instruction sheet and in profile on the reverse of the attractive box with profile-style artwork by Yukio Furutachi which also features photographs of the assembled and painted models on one side. 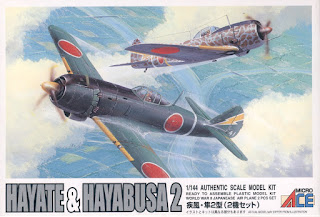 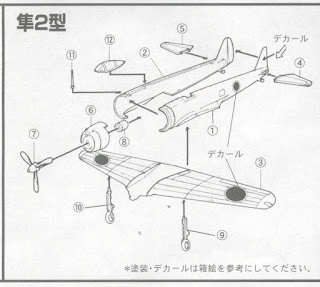 The LS/Arii kit only contains basic decals for a 3rd Chutai, 64th Hiko-Sentai aircraft. Painting instructions are limited to a suggestion to refer to the box art (shown above) which depicts an Oscar in brown 'giraffe' style mottle over grey or natural metal with a yellow fuselage band and white senchi hiyoshiki not included on the decal sheet. This unusual scheme appears to originate from Richard Ward profile E4 in the 1970 Aircam Aviation monograph No.13 'Nakajima Ki.33 Hayabusa I-III in Japanese Army Air Force, RTAF, CAF and IPSF Service' (shown below) perhaps from a tonal interpretation of a photograph in the book or from an earlier Japanese pictorial source?  Originally molded by LS in dark green plastic the Arii Micro Ace release is molded in white plastic. The under cowling oil cooler is molded integrally with the wing and the panel detail is finely engraved.

In the 1972 Revell Japan also released a 1/144 scale Ki-43-II kit as H-1005. This kit was released in the UK a couple of years later in the third issue box shown below. The kit was molded in silver plastic on a single sprue frame and included one-piece droptanks and racks as well as a two-piece black plastic stand and small tube of glue. Although the box art depicted a 64th Sentai Hombu aircraft the decal sheet provided only six hinomaru. The painting instructions suggested dark green upper surfaces over light green under surfaces. The antecedence of this kit, if any, is unknown and the molding is different to the LS kit with a cylindrical cowling with integral exhaust outlets but without intake or gun muzzle detail. The under cowling oil cooler is a separate part and panel detail consists of fine raised lines. 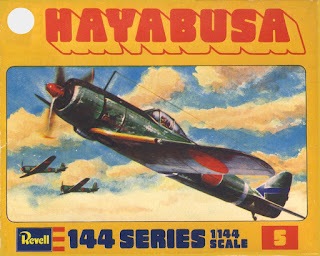 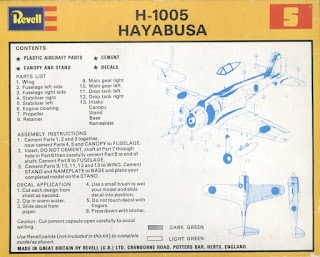 Frederick Boucher of the AeroScale website has since published a full build review of the Platz kit here.

Thanks for the heads-up Nick, this one had gotten by me, and looks like it's worth buying and building. The roundup of available Hayabusa kits in 1/144 is great too. I think the LS kit has been well and truly trumped.

Thanks for this kit comparison, Nick.