Francesco Borraccino has kindly shared these images and build details of his 1/72 Nakajima-built A6M5 Zero built from the Hasegawa 'Eien No Zero' limited edition kit. The model represents an aircraft of 721 Ku known as the Jinrai (神雷 - God's Thunder) unit from their role as carriers and escorts for the Ohka rocket propelled, piloted bomb.

The model was built from the box with only the addition of an Eduard IJN seat belt and landing gear hydraulic cables from lead wire. In addition an Eduard canopy mask was used. 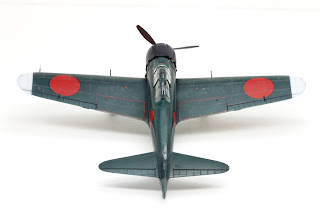 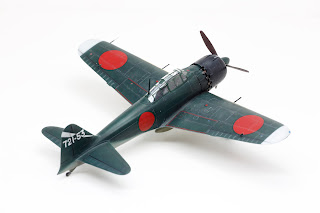 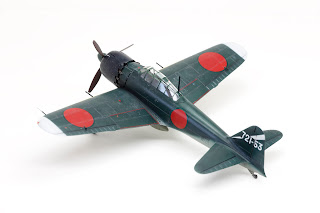 Paints used were AK Real Colors for D1 and J3, with minimal weathering but the drop tank finished to represent slightly fresher paint. Cockpit interior is Tamiya XF-71 with a Gunze yellow mix for the wing leading edge IFF strips. The prop assembly was painted with a mix of Gunze H406 Chocolate Brown and H462 Black Brown. 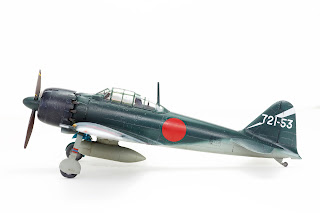 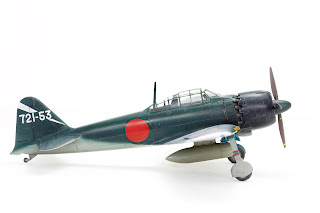 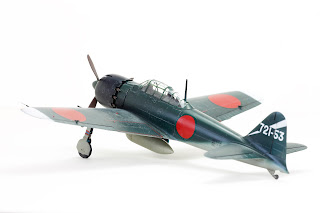 721 Ku was established in October 1944 with Mitsubishi G4M2 Rikko 'Betty' bombers equipped to carry the Ohka rocket bombs for air release from 16-18,000 feet and within 20 km of enemy naval vessels. Sento 306 Hikotai (S-306), an existing squadron which had been engaged in air defence at Yap, was to provide escort to the bombers with 48 Zero fighters. However to increase the escort strength an additional two fighter Hikotai, S-305 and S-307, were subsequently assigned to the Kokutai. 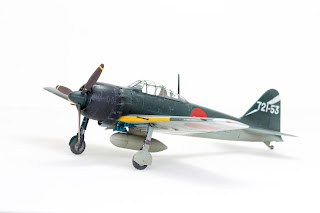 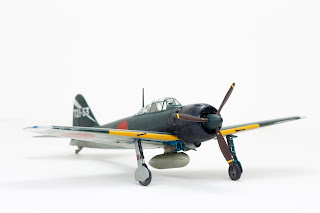 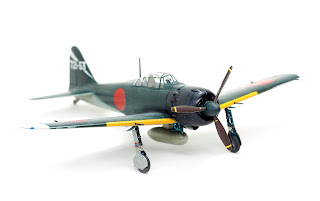 During the Kokutai's training period in Japan the fighter units were engaged in air defence sorties against US carrier attacks with significant losses so that when 721 Ku made its first Ohka sortie with 18 Rikko on 21 March 1945 only 19 Zeros of S-306 were operational. The disastrous loss of all the Rikkos on that mission has tended to overshadow subsequent Ohka successes such as the serious damage to the battleship USS West Virginia off Okinawa on 1 April 1945 and the sinking of the destroyer USS Mannert L Abele on 12 April. The interception of the rocket bomb carriers at distances of 50 to 100 miles from the fleet resulted in most Ohka attacks being made against the picket ships and destroyer screens rather than aircraft carriers and other large vessels. 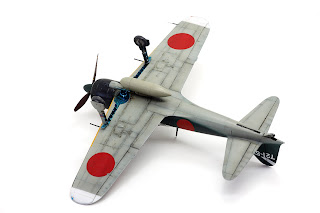 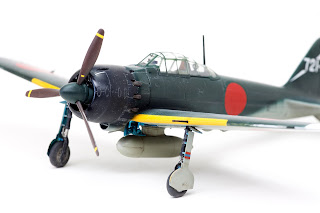 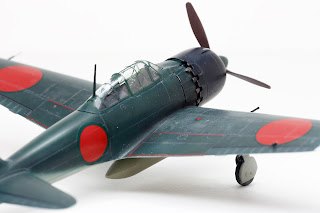 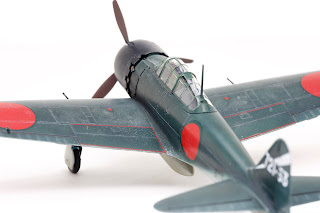 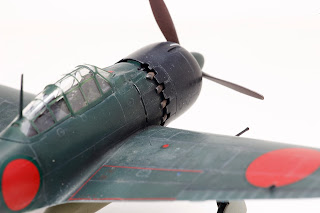 With special thanks to Francesco for kindly sharing these images and the details of his build, to Keishiro Nagao of Lifelike Decals for kindly assisting with the Japanese terminology and to Dr Yasuho Izawa for kindly providing an English translation of his book 'Rikko & Ginga' containing details of 721 Ku organisation and operations. 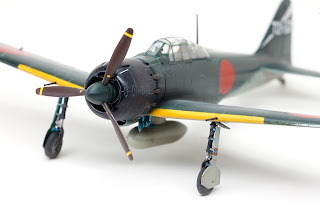 Francesco, what a sleek look you got into this model! In particular, the canopy framing is as fine as the prototype's appearance - *much* easier said than done, no matter whose masks you are using. Thank you for showing us this one, Nick, another interesting post with some info I didn't know.

Nice Zero. Thanks for sharing and thanks for the unit's story.

A great work with the right amount of weathering and very fine details. I like the paint work semi-gloss finish typical of aircraft freshly out of the production line.

Very nice model! I especially like the contrast between the paint on the underside and the belly tank. Very convincing.

Great Zero! Thank you for sharing!

Love this model and the unit markings. It's also good to see the AK colors on a model, like what I see. Thanks for sharing this!

What a great build! I especially like the unique color scheme of this time, the white wingtips, etc. The outdoor photos are very evocative.
Thanks for the thumbnail history of this unit.

Fine work, Francesco. Thanks for the historical material, Nick.

For some reason I really like these markings. A bit more decorative than the average late-war Zero I guess. Very nice models!