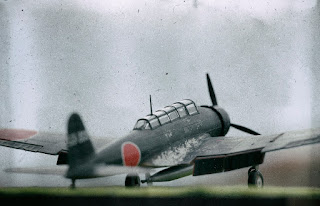 Francesco Borraccino kindly treats us to another of his excellently realised 1/72 models - this time the Nakajima B5N2 'Kate' built from the Airfix kit and representing the 553 Ku option provided. 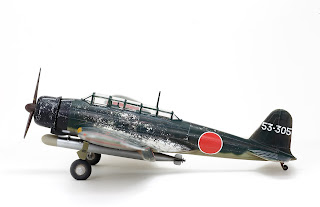 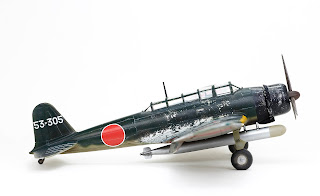 Francesco reports that this build was not as straightforward as expected, requiring a lot of attention to fit. When attempting to mate the wings and fuselage he discovered a gap and a difference in level that was tricky to eliminate. He also found that the forward fuselage parts for the engine needed sanding and several attempts at dry fitting. 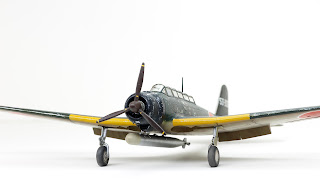 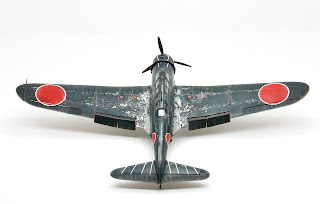 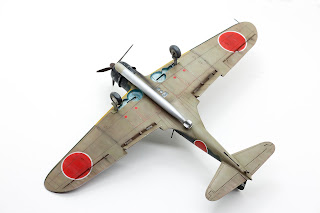 The most difficulty he experienced was fitting the landing gear which following the intended method of construction resulted in a strange and incorrect alignment, with the fit of the landing cover to the wing not permitting the positive insertion of the struts into their locating holes. In his kit the transparent ventral window part was also deformed. 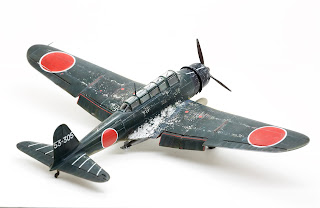 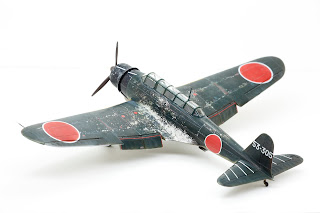 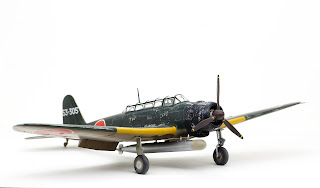 On the other hand Francesco found a good level of detail in the cockpit and engine parts, although he added some extra panels and seat belts from Tamiya tape. He also considered the panel lines not as deeply engraved as on previous kits. One strange feature of the kit is the fabric effect on the flaps whereas several modellers have asserted that they were metal covered (the jury is out on that Ed.) On the extended flaps the inner starboard part is curiously molded flat so Francesco carved it to match the others.  On completing the build with its ups and downs he was pleased with the result. 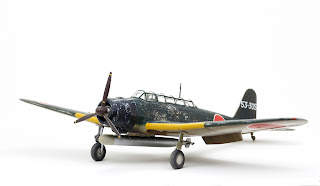 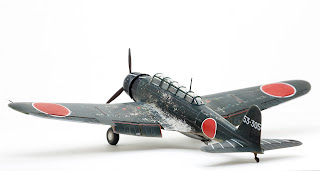 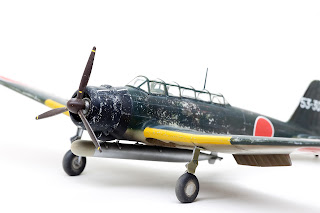 Francesco wanted to depict an aircraft with worn paintwork whilst realising this was something of a cliché for Japanese aircraft models. He began with an overall coat of Tamiya grey primer followed by a coat of Tamiya AS-12 bare metal. The reddish brown primer was replicated with a mixture of XF-7 Flat Red with Gunze H-463 Red Brown and H-406 Chocolate Brown. For the wear and chipping effects Francesco used AK Interactive Worn Effects Fluid and salt grain. 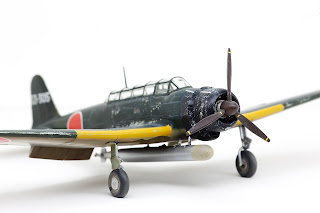 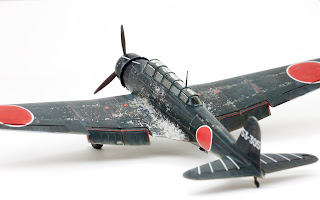 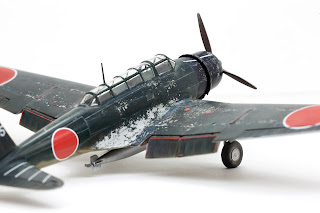 For the upper surface dark green he used Tamiya XF-11 to represent D1 Deep Green Black and thought it matched better than older examples used, wondering whether Tamiya have modified the formula. The under surfaces were painted with AK Real Colors RC303 J3 SP with a few drops of RC334 Dry Grass Color added to it. Francesco used the kit decals, printed by Cartograf, but encountered issues with the large wing hinomaru using MIcrosol as a result of the large gap between the ailerons and wing trailing edge. In the end he discarded the decals and painted on the wing hinomaru using a mixture XF-7 Red and H-463 Red Brown to match the printed colour of the decal sheet.  He used the kit's fuselage decals because his circle cutter could not create their small size. The propeller and spinner were painted with a ix of H-406 Chocolate Brown and H-462 Schwarzbraun. The model was completed with further weathering achieved with oils, pigments, pastels and a graphite pencil. 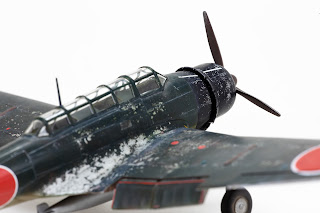 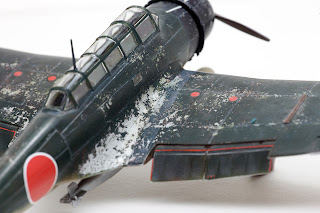 553 Ku were based at the Imaizaki airfield, part of the Kataoka Naval Base on Shumshu in the Kuriles Islands from April 1944 with a mixture of aircraft including the B5N2 and B6N2 Tenzan 'Jill'. In October 1944 the unit was transferred to the Philippines but a remnant left behind was activated as Hokuto Ku to continue ASW missions using four B5N2 and one B6N2. On 10 August 1945 the four Kates bombed Lopatka Point on the tip of the Kamchatka Peninsula. When Soviet aircraft bombed Shumshu two days after the 15 August ceasefire, the Kates sortied to attack a Soviet convoy at Lopatka Point in retaliation.

With special thanks to Francesco for sharing these images of his model and his build report.

Fine model. The weathering is nice. Thanks for sharing and the story.
That short air war (Kurils) is a "white spot" at my country.

Very nice, Francesco. Anyone tackling this kit will find this article very useful. Thanks for showing it to us, Nick.

Looks great! It would easily pass for 1/48. The colours are very nice; I'm surprised how realistic the Tamiya green came out. In this case the heavy chipping fits the model very well (even if I'm not normally a fan of excessive weathering).

Nice build and finish on the Airfix kit. You pulled it all together in spite of the challenges. Surprised this was encountered on a new kit. Thank you Francesco for giving us a look and Nick for featuring a very interesting subject.

Great model, Francesco and interesting tips about the "downs" of the Airfix kit.Your observation will turn useful when I will finish my Kates. It is not a big surprise to learn of such flaws - the recent Airfix production looks very fine but here and there it is not rare to find out mistakes and defective details such as the P-51D u/c legs that I found weak, fragile, bent and too thin in scale. A disaster for an otherwise pretty fine kit that can keep up with the best Tamiya production.
Thanks Francesco and Nick for sharing these images and for the historical notes.

Great looking model, especially for the scale. I had started the 1/48 Airfix P-51D recently, and it too is a puzzling collection of positive and negative aspects. Like the weathering, as a lot of images of mid to late war Kates show this level of chipping. Thanks for sharing!

A beautiful build, and great advice on its construction. Sadly, it seems that incomplete or deformed transparencies are a hallmark of Airfix kits of late.

That looks really good. I first thought it was 1/48, which says enough of the quality of the model and modelling! Great job.

Very interesting description of the construction of the model. I will definitely include it before I buy B5N2 from Airfix. Unfortunately, the manufacturer is famous for its wings that do not fit the fuselage very well. It is always frustrating for a modeller.