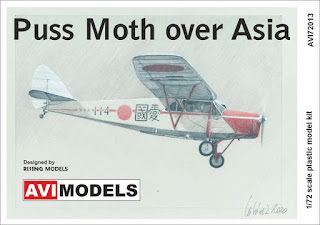 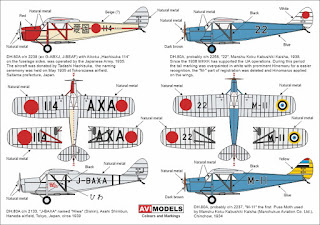 DH.80A c/n 2238 (ex G-ABXJ and J-BEAF) displays the Aikoku presentation legend Hachisuka-114 on an aircraft donated to the Japanese Army in 1935 by Tadashi Hachisuka. In silver dope with red cowling, struts and trim, the fuselage is suggested to be beige (or cream?). G-ABXJ was originally registered to Capt Max H Findlay of London Air Park before being sold overseas, presumably to Mr Hachisuka, in July 1933.

DH.80A '22' of Manshû Kôkû Kabushiki Kaisha (MKKK - Manchukuo Aviation Co., Ltd.) during 1938. In blue and silver dope with Hinomaru added to wings and the white-painted tail for IJA liaison duty. MKKK had acquired 12 Puss Moths in 1932-33 registered as M-11 to M-22. A further 15 aircraft were manufactured without licence by MKKK using purchased engines and propellers, registered as M-23 to M-37 and designated Mankô-shiki 3-gata (Mankô type model 3).  Some of the MKKK Puss Moths were used to support military operations by transporting senior IJA staff officers and engaging in other liaison duties, as well as bombing using improvised methods during Operation Nekka in 1933.

DH.80A 'M-11' of MKKK based at Chinchow in 1934. In blue and silver dope with Manchurian roundels and tail flash. This was the first Puss Moth acquired and registered by MKKK. 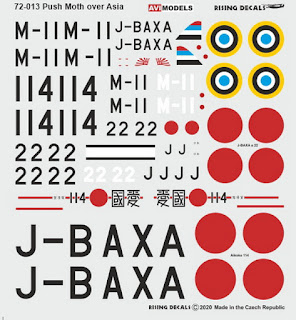 For some unknown reason the fuselage moldings have omitted any representation of the side doors and those will have to be scribed in by the modeller. Interior detail consists of a floor, instrument panel, control column and three seats but omits the rear bulkhead, which was variously equipped with a luggage rack or radio equipment, and the internal door furniture (see the Britmodeller feature linked below for details). Interior colours are unknown and no clues are given but brown leather upholstered seats and door facings with a wood veneer instrument panel are indicative of the type as manufactured. 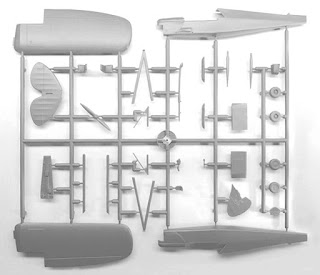 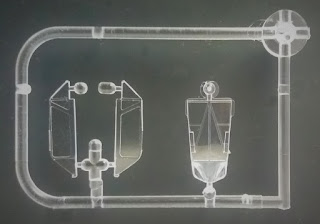 An interesting kit offering something unusual but relevant for Japanese aircraft enthusiasts who may find the choice of subject the most challenging part of a project. A skilful and useful build of the identical 'Puss Moth Over Europe' issue of this kit may be found at Britmodeller, resulting in a superb and exceptionally attrractive little model of the Czechoslovak Baťa OK-ATG.

With special thanks to Mirek of Rising Decals for the review kit.

Reference: 'The Eagles of Manchkuo, 1932-1945: An Illustrated History of the Civilian and Military Aviation' by George Eleftheriou and Kiri Domoto-Elftheriou (Arawasi 2011).

Thanks for this review, Nick.