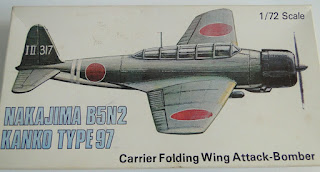 Back in December 2014 I blogged a kit trivia feature on the 1/72 Mania/Hasegawa kit of the Nakajima B5N2 'Kate' in which I mentioned the 1/75 scale Nitto Kagaku kit of the type re-released as being to 1/72 scale in 1972. Recently reader G T Roche very kindly got in touch to advise me of a rare re-marketing of that kit in New Zealand during the 1980s as the 'Nakajima B5N2 Kanko Type 97 - Carrier Folding Wing Attack-Bomber' under the 'Panda kitset' logo by Toltoys (N.Z.) Ltd., box art as shown above, contents as shown below. 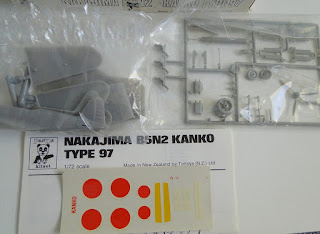 There is a company history of Toltoys  here related to their marketing of Star Wars merchandise and the company was also discussed at The Wings Over New Zealand Aviation Forum here. Toltoys also re-issued the 1/73 scale Nitto kit of the Kawanishi N1K2-J Shiden-kai, box art as shown below. 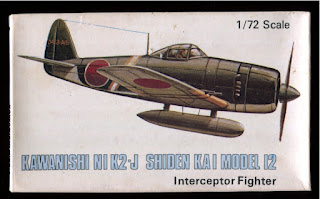 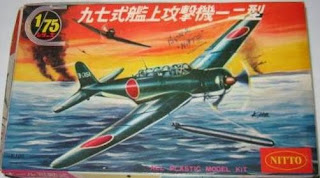 The original Nitto 1/75 release box art for the B5N2  is shown above. I had blogged a 1968 release date for the original kit whereas Scalemates records 1964 and John W Burns 'In Plastic - WW2 Aircraft Kits' records 1966! From that listing 'Panda' are reported to have also re-released the Nitto B6N2 Tenzan, issuing the trio of former Nitto Japanese aircraft kits from 1980-84. They also re-issued the Airfix Mitsubishi A6M2 Zero as well as other Airfix kits. The Toltoys/Panda kit numbers are as follows:-

With special thanks to Mr Roche for alerting me to this byway of kits and providing links for the images and details about Toltoys. Any further information or memories about the kits will be appreciated, thanks.

Reminds me of the 1/50 Tamiya kits. When I was a kid, my local toy store/hobby shop managed to get in a copy of the 1/48 Lancaster (it was $8 USD, the Monogram B-17 was around $4). I saved my chore money, and bought that beautiful model. Upon getting it home, it had a small Tamiya pamphlet in the box, showing the 1/50 kits of the Myrt, Raiden, Shoki, etc. That was the beginning of my fascination with Japanese WW2 aircraft!

Love seeing these older kits, thanks for sharing!

Extremely rare things. Not for assembling. For the History.
Thanks for sharing.

Thanks to Mr. Roche & you, Nick for posting this info.