Recent Rising Decals releases include two sets for the Nakajima E8N1/2 Type 95 'Dave' reconnaissance seaplane in 1/48 and 1/72 scale, plus two sets in the 'Unknown and Less Known Units' series for the Kawasaki Ki-32 'Mary' and Mitsubishi Ki-15 'Babs'. 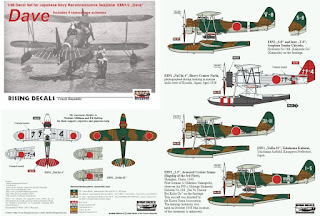 Set RD48030 shown above and below is recommended for the 1/48 Hasegawa E8N1/2 kits and contains markings for four different aircraft as follows:- 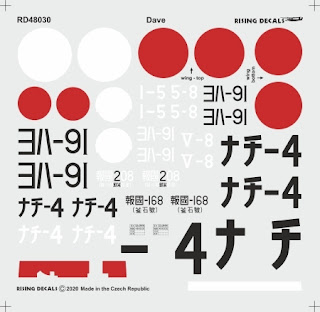 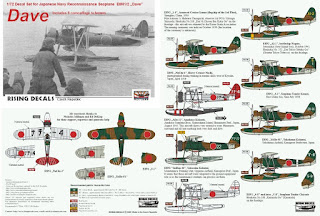 Set RD 72088 shown above and below provides markings for no less than eight 'Dave' floatplanes and is recommended for the 1/72  RS Models kits. This sheet includes markings for the same four subjects as the 1/48 sheet plus the following additional subjects:- 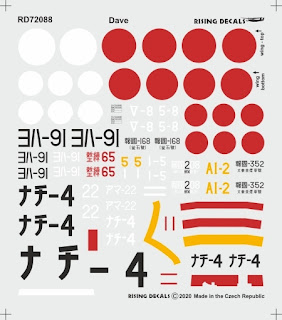 The green and brown camouflage on IJN floatplanes is reported to match the colours D2 and H2 in the Kariki 117 Standard. Rising recommend Gunze Mr Color 15 IJN Green and a mix of Gunze Mr Color 4, 6 and 7 in the ratio 30%, 30% and 40% respectively. The H2 colour is approximate to FS 20122. For the J3 under surface grey Mr Color 315 is suggested. That matches FS 16440 whereas FS 16307 is closer in appearance but without a corresponding Gunze paint. Both FS colours are Munsell GY (Green Yellow) but 16440 is significantly lighter than 16307, better representing a faded and chalked surface. 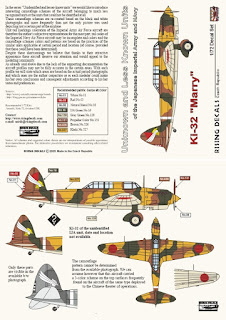 Set RD72090 shown above is a set of markings for a single subject 'Mary' of an unknown unit featuring a Samurai helmet insignia on the tailfin and rudder. The insignia includes a red flash above the helmet which is marked as optional. The rudder tab is marked in red and white stripes which will have to be painted. The aircraft is depicted in the tri-colour 'China' camouflage scheme on the upper surfaces for which Gunze Mr Color 16 IJA Green, 527 Khaki and 526 Brown are suggested.  Under surfaces are depicted as 128 grey green.  Recommended kits are the 1/72 Amodel or Xotic72/Aviation Usk unfortunately neither of which are accurate representations of this aircraft. 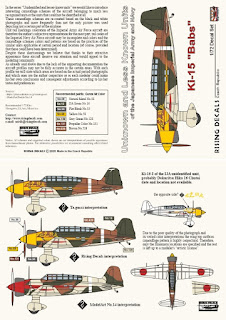 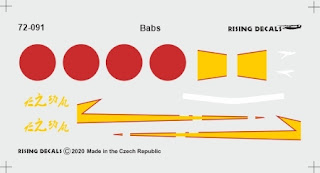 Set RD72091 shown above is a set of markings for a single subject 'Babs' featuring a large yellow arrow symbol on the cowling and fuselage. Three interpretations are depicted in the instructions including that shown in Model Art Profile 14 ('Army Ki-15 "Babs", Navy C5M, Kamikaze and Asakaze') as displaying a red arrow which would require the decal to be painted over. The red border will assist that endeavour. Upper surface camouflage is depicted as green and brown or a tri-colour scheme of green and brown with grey green as suggested in the Model Art book which states that the unit is Dokuritsu Hiko Dai 16 Chutai (Independent Flying No.16 Squadron).  Again Mr Color 16 and 526 are suggested for the green and brown. Recommended kits are the 1/72 Hasegawa (ex-Mania) and Arii Microace (ex-LS).

The two 'Dave' sets offer interesting alternatives to the kit decals whilst the 1/72 sets are welcome additions to the Unknown and Less Known repertoire.  With special thanks to Mirel of Rising Decals for providing the review samples.

I would gladly welcome a scaled down 1/72 version of the Fine Molds Ki15 as well please :)

I'll never live long enough to build all the kits needed to use up my Rising Decals sets. These look worthy of adding to the pile!

Thanks for these reviews, Nick.