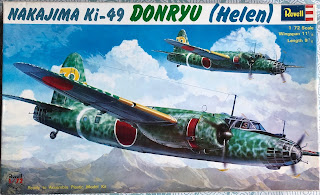 The Revell Nakajima Ki-49 Donryu (Helen), the Type 100 Heavy Bomber (百式重爆撃機 - informally '100 shiki ju-baku')  was one of several iconic Japanese aircraft kits released in the early 1970s which provided the only mainstream injection game in town for type and scale for many years. It was well received when issued as kit H-102  in 1973 with the collaboration of Takara in Japan (?) but has suffered the fate of many a classic by tending to be increasingly dismissed by pundits, partly due to its supposed inaccuracies, its raised rivet detail (albeit which is commendably fine) and of course the release of the very fine Hasegawa Donryu in 1998. 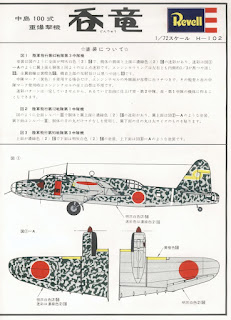 Most examples of the original release appear to be in the stronger Revell Japan box with all instructions in Japanese but confirmation as to whether flimsier boxes with English language instructions ever existed would be welcome. According to a review of the kit in the March 1981 issue of Air International magazine only three of the quintet of Revell Japan kits were issued by Revell (UK), Toryu, Ginga and Gekko, with the Donryu only available from specialised dealers as a Japanese import. It was a quality product for the time with a separate leaflet of colour printed markings schemes as shown here (the scanning has rendered as light grey the original silver metallic ink used to represent natural metal) and a comprehensive decal sheet with insignia for no less than nine examples from eight units operating the type, including some multiple Chutai colour options as follows:-

Unused decal sheets in unbuilt kits have often yellowed or become stained and in some cases marred by craquelure with the risk of breaking up when softened in water. For that reason aftermarket alternatives are particularly welcome and hopefully there will be more! 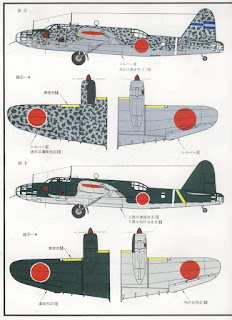 The kit itself is neatly moulded in silver plastic with a fairly detailed interior for the time, consisting of floor, bulkheads, seats, control columns and instrument panel. The configuration is not accurate as the tunnel to the nose position is central with a full span instrument panel and dual control sticks rather than the actual arrangement of the tunnel on the right with a truncated instrument panel and the co-pilot's control yoke on an extension from the pilot's control stick. The floor incorporates a bomb bay with four separate bombs but the bomb bay doors are moulded as a single piece. The nose interior has a prominent central seat, incorrect to the actual configuration of a folding seat on the right side, and  incorporates a bomb sight and machine gun. Additional machine guns for the ventral, waist and tail positions are included with a 20mm mounting for the dorsal position. The weapon was mounted to the right of the gunner as on the Hiryu but rather than a fully revolving turret the canopy had to be opened for the mounting to revolve and the weapon to fire. The ventral position is actually better defined than in the Hasegawa kit. Engine rows are separate parts, the cowlings are finely moulded with the flaps as a separate piece and the larger under cowling oil cooler intakes are included with a note to omit them to represent the earlier Ki-49-I. The props and spinners are single piece mouldings with the broader blades of the II.  The undercarriage components are well represented. 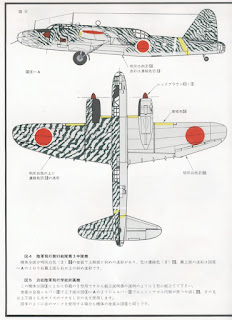 On the version differences the production development of the II series has as usual become confused with the Ko, Otsu, Hei suffix sequence, the terms being attributed to airframe and ancillary differences rather than armament as intended. The II Otsu had improved armament of Ho-103 (Army Type 1) 12.7mm machine cannon in nose, waist, ventral and tail positions with a Ho-1 20mm machine cannon in the dorsal position. The II Hei was equipped with Dempa Keikaki radar as special equipment. 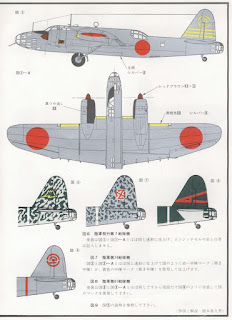 There was a point by point comparison of the Revell and Hasegawa Donryu kits by Peter Fearis in Issue 2, Volume 5 of JAS Jottings (the quarterly magazine of the IPMS UK Japanese Aviation Special Interest Group. The unsurprising conclusion was to leave the Revell kit to collectors and to build the Hasegawa one. The above mentioned Air International review was less dismissive and summarised the original Revell release as follows:-

'The Donryu kit consists of 84 component parts, including 12 transparencies, and all fit together well. The interior is well reproduced, with a floor extending from the nose to the ventral gun position on which are mounted seven seats and other features. The transparencies are extensive and very clear. Both cylinder banks of each engine are separately formed and the undercarriage is nicely in scale proportion. The decal sheet which offers the correct shade of red for the hinomaru, offers markings for nine  different aircraft in a variety of finishes, each aircraft being illustrated in full colour in a four page leaflet which supplements the all-Japanese instruction sheet. The lack of an English translation is of no importance as the diagrams render everything abundantly clear. Commendably accurate, this kit is well worth obtaining, although we can offer no details of price or current availability.' 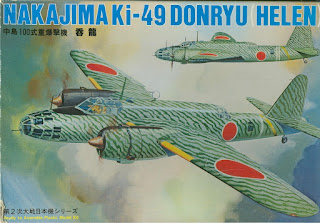 In 1980 the Donryu kit was re-released in a flimsier box as S35 (although retaining H-102 as a sub-designation) with new artwork as shown above, instructions and decal options, the parts being moulded in light grey plastic but otherwise unchanged. The instructions, again in Japanese only, included a reference to Takara, inviting purchasers to contact their service centre with any questions, providing a Tokyo address and telephone number.  Colour call outs were for Revell (Japan) paints which share catalogue numbers with the subsequent Gunze Sangyo paint range. 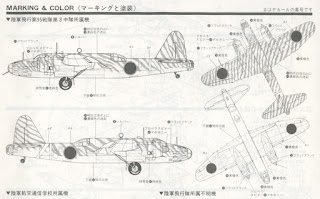 The colour schemes and markings offered in the kit were significantly reduced from the original to only three options with illustrations printed in monochrome and as follows:- 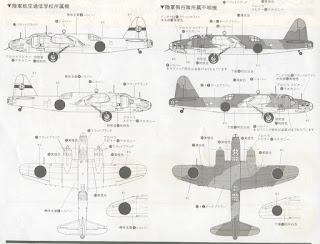 Whilst the modelling consensus is to usually depict Army mottles on predominantly natural metal finishes the evidence is that they were also applied to solid grey green or in some cases light blue or light brown base coats. And the solid base coats were not always applied as an overall finish but sometimes limited to the upper surfaces only with natural metal retained on the under surfaces. The reason for this variance, even for aircraft within the same unit, is obscure but probably expedient and related to the availability of paint and/or the urgency required in preparing replacement aircraft for operational use. Monochrome photographs tend to obscure these nuances but even some colour photographs have been misinterpreted as a result of conventional beliefs.

Model Art No.329 'Camouflage & Markings of the I.J.A. Bombers' published in Japan in 1999 does not materially challenge those suggestions. For those not familiar with the appearance of the Thorpe alpha-numeric categorisations a colour chart with sRGB chips rendered from his original Munsell notations and additional notes is available on request as a PDF from this author.

Light greyish-white (明灰白色 - mei hai (or kai) haku shoku) is a long standing Japanese convention often used to describe both Army grey-green and Navy grey in kits and reference books, unfortunately persisting to this day as it is not characteristic of the original appearance of either colour.

What's In A Name?

Donryu is commonly translated as 'Storm Dragon' in English, but the origin of that interpretation is obscure. In his 1997 Schiffer monograph on the type Richard M Bueschel named it 'Dragon Swallower'. However the characters 呑龍 mean 'Gulping Dragon'. Although Donryu was developed in 1940, the Imperial dynasty year 2600, it was officially adopted by the IJAAF in 1941 which should have resulted in its designation as the Type 1 Heavy Bomber. But as 1940 was a memorial year of national celebration, the IJAAF assigned it instead to 2600 and designated it the Type 100 Heavy Bomber. 'Gulping Dragon' sounds bold but in fact was taken from a very gentle monk 'Donryu' of Joudo-shu (a branch of Buddhism) who took care of and educated poor children during the Edo era. The Type 100 was named after the 'Daikou-in' temple, commonly known as the child-raising Donryu shrine in Ohta City, Gunma Prefecture, where the Nakajima factory was located. With very special thanks to Keishiro Nagao of Lifelike Decals for his kind insight to this aspect of the aircraft.

Thanks for all this, Nick. I recall being a kid, and seeing all these great kits with box art like the original release, the 1/32 Ki-61, and others, so vibrant and exciting. Brings back some fond memories of more simple times.

Thanks for this one, Nick. Somebody's wallet is probably itching now! A couple of years ago I found one of these at our local club auction, most of the parts loose, so I was able to see how well it fit, and was surprised, considering its age, how well it was detailed. Mike Quan once built Revell's Ginga kit quite beautifully, and having seen the Hasegawa kit of that one finished as well, there isn't a notable difference between them. Oh, how exotic these Takara kits seemed to American modelers in the 1970s!

Agreed, both the Revell Helen and Sally kits are still quite good. Kevin Bade's build and excellent finish of his Helen in the previous article is inspiring for these old army bombers.

I have never seen Revell's Donruy. But I think it's quite possible to build it now. I have built their Gekko and Toryu.
Although the newer molds are undoubtedly better.

I remember what a revelation those Revell kits were when I first saw them. Exotic and well crafted with full color camo schemes. Having grown up on Airfix Vals and Dinah and all the bad Zero kits I couldnt believe someone actually made these fantastic Japanese twin engined wonders. Sadly I only ever built the Nick and Sally. The Helen still looks like a very buildable kit compared withe Hasegawa. Theres a certain charm to those old model.

Thanks, Nick for your time & effort to post this info.