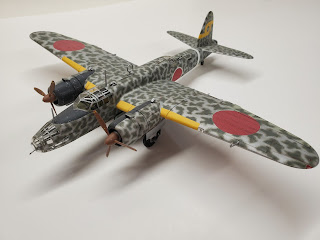 Pursuant to the review of Rising Decals Donryu set there was only one respondent to the invitation for photos of Donryu models with Kevin Bade kindly sharing these images of his splendidly broad-shouldered Hasegawa 1/72 scale Nakajima Ki-49 'Helen' in Hiko Dai 62 Sentai, 3rd Chutai guise. The model was painted with a base coat of Testors aluminium then Aeromaster IJA Grey and Green using his 'trusty old Paasche H model airbrush'. 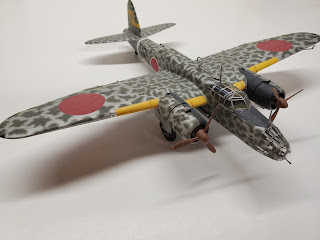 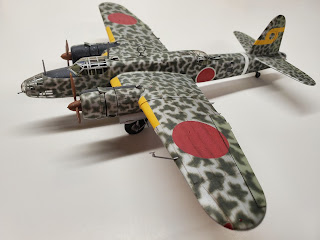 After service operating the Ki-21 'Sally' from July 1939, the 62nd transitioned to the Donryu at Obihiro, Japan, during December 1943 and January 1944 under the command of Lt Col Nobumasa Haga. After supporting the 63rd Sentai's move from Hokkaido to New Guinea the unit moved to Saigon in Indo-China for participation in daylight attacks from airfields in Burma which proved disastrous. After preliminary losses to Allied ground attacks reduced aircraft strength to eight the unit re-organised at Sungei Patani, Malaya, with a dual component of the Ki-49 for daylight sorties and the Ki-21 for nocturnal sorties. The night attack unit was commanded by Capt Tsutomu Ohshita.  On 27 March 1944 nine Ki-49s sortied for a daylight attack against Ledo but failed to locate the target in conditions of heavy cloud and were then attacked by P-51 fighters, losing eight aircraft in quick succession. The only surviving Ki-49, flown by 3rd element leader 1Lt Akira Ohno, force landed in friendly territory with three dead crewmen. 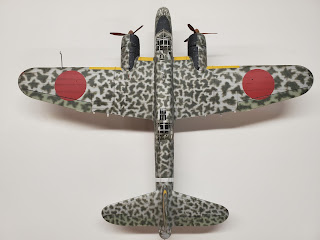 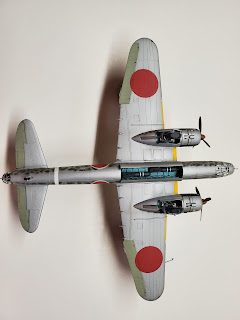 In late September 1944 a detachment of the 62nd operated with part of the 12th Sentai as the Karigane unit with nine Ki-21 bombers under Capt Chugo Ito for sorties over western New Guinea and the Philippines, whilst the main unit also conducted attacks against targets in Morotai and Leyte during October and November before returning to Japan in January 1945. The unit was then re-designated as a Tokko special attack unit operating specialised Ki-67 Hiryu aircraft.

With special thanks to Kevin for sharing these images displaying the distinctive plan form of Donryu to advantage. Comments regarding the translation of Donryu and its characters welcome! ;-)

What a beautiful, well done model. Love the camouflage, and overall paint finish. It does not look like a 1/72 model at all. Such a great looking aircraft that needs more attention from kit companies. Thanks for sharing this with us, Kevin.

Excellent representation of a rarely built model. I never really looked at the plan view of this massive bomber. The forward wing extension between fuselage and engines is very interesting - what may the purpose have been (better landing characteristics? fuel tanks?)
Thanks for showing us this notworthy plane.

Very nice work, mate! I'm another big fan of the Paasche Model H airbrush. It was the first airbrush I bought back in the 70s (gulp) and it's still the one I use 99% of the time. Cheers, Bill

A beautiful job! I have one in the stash, but many other projects are in the queue; I will save these photos to my reference folder for inspiration when the day comes to take on my own Donryu.

Thanks Mark for the honourable mention!

Michael, the extended centre section leading edges were not part of the original crescent wing design. One of the design team Hideo Itakawa was perturbed by the fuel capacity and proposed the extension both as a design element to reduce drag and to house extra fuel tankage. It proved successful on both counts. The fuselage was designed by Iwao Shibuya, so noted for his structural calculatiomn ability that he was known as the 'God of Corrugated Iron', and was planned exceptionally light in order to facilitate the much heavier defensive armament required.

Thanks for sharing. The excellent paintwork.
Thanks for very interesting combat history, Nick.
Were army bombs really black?

Yes, the Army bombs were usually painted black with various coloured nose and body bands to indicate type and explosive.

Thank you all for the positve comments and thank you Nick for the informative history of the 62 Sentai. I have always thought looking at pictures of most field applied blotch camoflage that it was the result of many hands differently interpreting the command to paint the airframe. Usually the shapes and styles of application vary with the part of the aircraft. Sort of hey you do the wings, I'll do the fuselage and Toshio will do the tail. Makes Japanese aircraft so interesting to paint

A fine build, Kevin & thanks for sharing it with us Kevin & Nick.