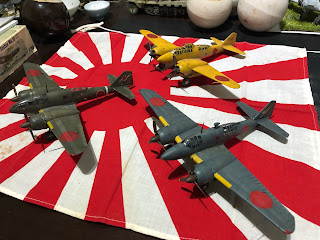 Jason Brash has kindly shared images and details of another of his excellent Japanese twins projects - this time a trio of Mitsubishi Ki-46 'Dinah' models in 1/72 scale. The svelte Ki-46 or Type 100 Command Reconnaissance plane was popularly known as the New Command Recce (Shin Shi-tei 新司偵). In Jason's own words then:-

'For my next project I decided on a dual build, which turned into a triple build, of the Hasegawa Ki-46-II & III and an LS (since re-released by Arii/Microace) -II-Kai. Hasegawa make a fantastic looking Ki-46 'Dinah', capturing the beautiful lines in both versions. The LS kit is good with very fine detail and engraved lines, though I do feel it's a little fatter in the fuselage, engine pods & wing thickness 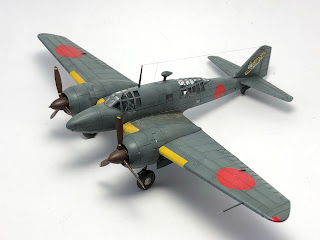 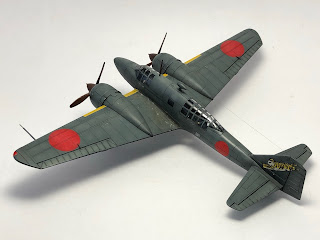 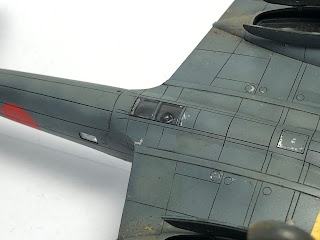 'The trainer needed some details scratch built as the kit was only supplied with one seat and bulkheads way out of scale. Fortunately the Hasegawa kit comes with dual controls and seats so I was able to integrate these. Though not a perfect it they filled the rear canopy nicely. With some advise I painted both interiors on the -II's in a dark blue grey, mixing the shade from SMS paints using various shades. The - III's interior was painted in a greenish khaki. 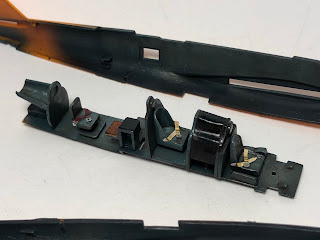 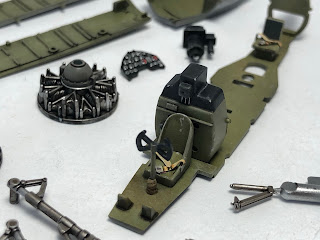 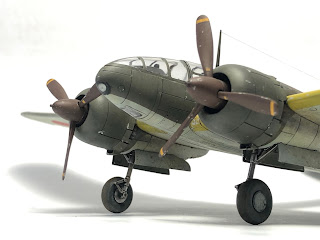 'From here the main construction started with all three being fully built up. The LS kit went together well with minimal filler needed around the wing roots and underside between the wings. Both Hasegawa kits were a perfect fit with no putty needed at although care is needed when trimming the engine pods from the sprue to avoid problems when joining them to the wings. 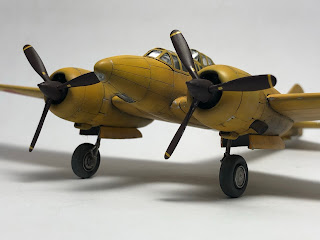 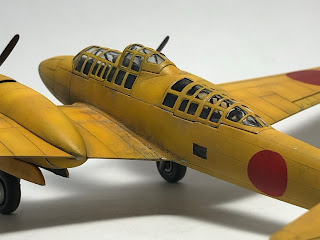 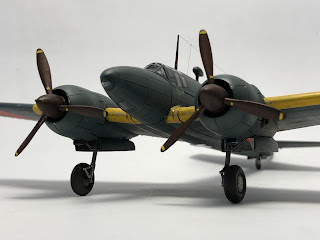 'Onto the painting. All three were black based and highlighted in various shades of white, grey and tan. For the trainer, I used SMS Trainer yellow, Marigold Orange & School Bus Yellow to achieve an overall orange-yellow shade, leaning more to the yellow  and with a slight fade. I was inspired for the -II and -III from photos and a painting of some distinctive machines. The -II was finished in a blue-grey colour, which SMS Kure Grey fitted the bill for quite well without too much fade or modulation. This scheme is believed to have been on some machines although no photos exist. The -III was finished in an earth brown which had an olive hue to it. This was made from SMS Olive Drab & RAAF Earth, modulated with Middle Stone for fading. I wanted this one to look as though it had been in the tropics for a while though still in front line service. 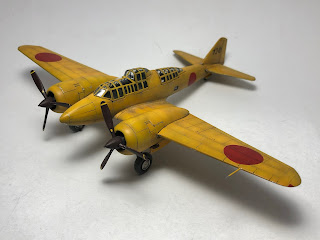 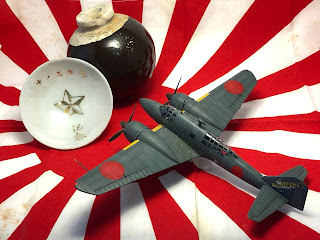 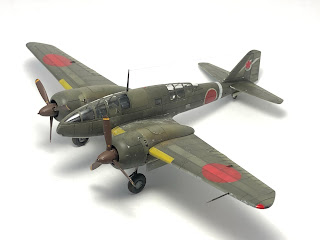 'With the painting completed it was time for the markings. All Hinomaru, IFF and flight bands were painted on with only tail insignia decals being used. The decals in the LS kit were unusable and the wrong shade so the tail markings for the trainer were made from what I had on hand and are fictional. Though the large numbers on the wing undersides most likely did not exist, I liked the look it gave so they were kept. With a black/brown wash made from Tamiya panel liner plus some pigments and weathering pencils for exhaust, they were completed and ready for display. One extra step I took with the -III was the construction of the base from an old photo frame. The photo provided showed the aircraft in a field, abandoned and in disrepair. Though my model is serviceable I had the scene layout in my mind throughout the build and I think this addition really finishes the model. 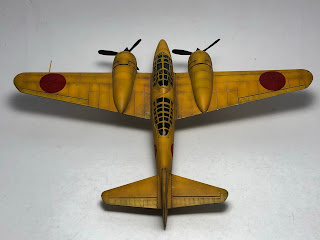 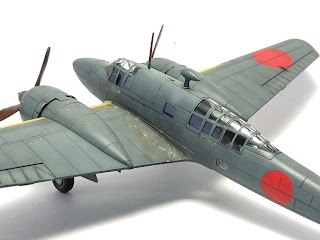 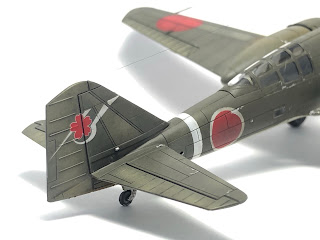 'Though I enjoyed all three, I have to give the Hasegawa Dinah the cake here. They build up very well and I prefer their shape to that of the LS model, though for the time (1974) I am impressed. I would loved to have built the Hasegawa trainer variant but it's hard to find and if found not cheap. Now to build the -II in surrender scheme plus an interceptor version . . . the list goes on.' 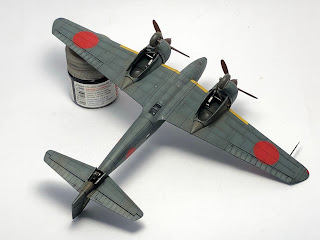 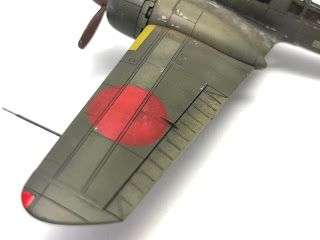 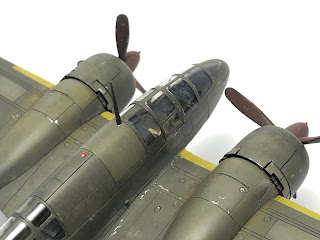 With very special thanks to Jason for sharing this trio of superbly finished Ki-46 models. 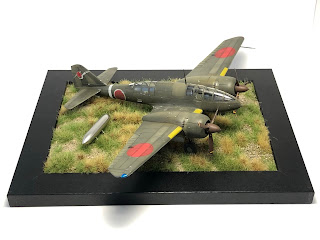 The excellent trio. The weathering is great.

These are superb! Thanks for sharing them, Jason, you have an excellent style with painting and weathering, and like the Nick, you've presented something that is rare to see even online - great builds of these superb Hasegawa kits. Though I build in 1/48 and 1/144, I have one of each of these Hasegawa Dinahs...it's my favorite a/c, not so well represented in 1/48 - and these photos are certainly inspiring.

Nick, thanks for once again providing a forum to see such models and learn about the techniques and art of fine modelers from all round the world - building our favorite subjects! It's Thanksgiving week here in the US, so a good time to say thanks to you for years of such posts. Aviation of Japan is a treasure.

Possibly the most elegant aircraft ever produced what a remarkable trio of builds. Thanks for sharing with us your craftsmanship. I now want to build another one. And Im in agreement with Mark during this week of Thanksgiving in the states that we are fortunate that Nick continues his blog and that we can all share our passion for this slice of history.

Such an outstanding set of triplets!

A timely Thanksgiving Thanks for your contribution.

Beautiful models all three. I'm really envious of 1/72 modellers. It's much easier to build a nice series such as this. Let's have more!

Thank you very much Mark and Kevin for the nice comments about the blog. It is a privilege to show so many fine models here and to host any submitted articles, whether model builds, kitography, modelling nostalgia or any other subjects related to Japanese or Far Eastern aviation. All welcome and enthusiasm for the subject is just as important as modelling skills.
Regards
Nick

Thanks Nick and all the contributors. The site is one of my most looked forward to destinations. And the builds! Its as if the subject comes alive for us viewers of aviation from that period. Keep 'em coming.

Wonderfully done trio for sure, it's great seeing a type such as this have side by side views to see the differences. Love the paint and weathering, as well. Thanks for sharing these with us, Jason.

Thanks for all the fantastic comments, really appreciate them. Thanks for all your help in the process Nick & allowing them to be presented on your blog

These are really cool! What a neat set!