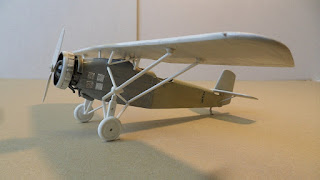 John Haas continues to ply his exceptional skills magic in his build of the Mitsubishi Type 92 Recce:-

'First I would like to thank all the readers for their kind comments! So up to the next stage in progress. After glueing the wing halves I could do some more work on the fuselage. The upper part of the fuselage was a bit low in front of the cockpit, so with putty I corrected the profile to the right height and shape. 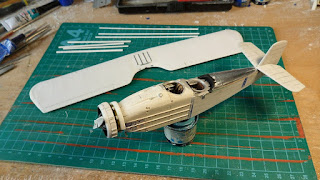 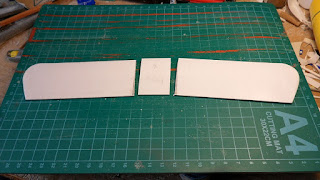 'I added some more details, two MG's in front of the windscreen. It is always tricky to add two gun- troughs in the upper decking. Some very carefull filing was called for here. Behind the engine there were some cooling louvres, I made them using a strip of self adhesive aluminium tape. A problem was to place it without denting on the fuselage. I was not happy with the result, so I used two separate pieces and that worked better. The tail pieces were glued with thin pins to the fuselage. After detailing the engine I glued it onto the fuselage. The Japanese version of a Fairey Reed propeller was made up from thin 0.5 mm sheet, bent to the correct angles. 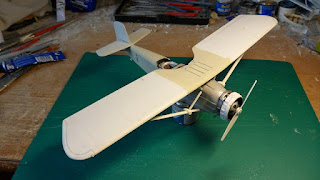 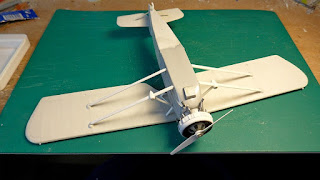 'Now after drying, I had to do more work on the wing. Because of the sweep-back, I cut the wing into three parts. The middle section could remain square but from the large outer parts I removed a v-shaped section and after checking for the correct angle I glued the three parts back together. Again I used some metal pins to ensure a solid bond between them. Finally I made the cut-out in the middle part. And now I arrived at a difficult step - how to fix the wing on thin struts to the fuselage. First I carefully drilled some holes in the wing and fuselage, then with trial and error I first glued the small cabane- struts onto the fuselage. The next step was to check the wing hight and elevation. By experience I find it easier to turn the model upside down and then glue the large struts in place. Fortunately that technique also worked fine this time. Very important is the fact that after some drying time it is still possible to make small adjustments if necessary. 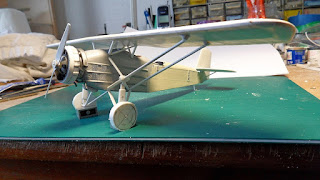 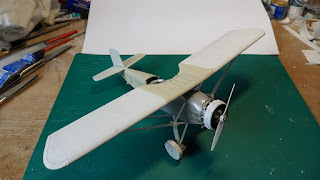 'Now after this important milestone, I could pay attention to the smaller parts and details. For the undercarriage first the struts. I cut them from sheet material and filed them in profile. Some photographs show some planes with a wind-driven dynamo on one of the wing struts, I always like such small details, so I added this to my model. Finally the wheels. As so often, I could not find the right size in the spares box, so I had to turn them with the Dremel and hobby knife. Well the general construction of this model was almost finished and time to do some more painting. Until the next and last chapter.' 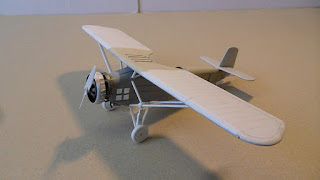 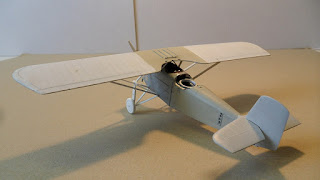 With very special thanks to John for sharing these images and details of building this superb and unusual model from scratch.

John I am so enjoying this scratchbuild series and thank you Nick for bringing it to us. Seeing this aircraft come together just astounds me. You make it seem so easy which of course it is not and all the work you do looks so well thought out and accomplished. Can hardly wait to see it painted. More great modelling on AoJ.

Great progress for such a difficult project.

John's scratch-building skills fill me with awe every time! There are so many small tricks that also help me improving my vintage kits. Those wheels for instance - incredible! I'm not sure if I could manage this.

It's really coming together nicely. Enjoying the process and thanks for sharing with us John and Nick.

Nothing short of artwork. Thanks for sharing this process with all of us, John and Nick.

Simply masterful work on display !....just reading about the process of this scratch build makes my head spin :)

Bravo John and Gratitude to Nick !

This year I've picked up scale modelling myself after a 23-year break and I find myself having a hard time finding scale models that are accurate enough (I am picky...). I may very well be joining you in scratch-building 1/48 models. When I stopped in the 1990s I was working on a 1/48 Nakajima Kikka! :)

Thanks for showing us your work and methods, and for Nick for sharing it here. Very inspiring!

Most impressive work, John. Thanks for sharing, John & Nick.