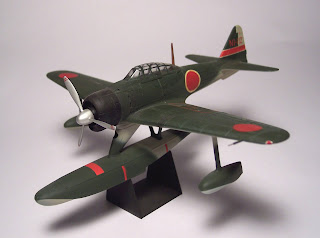 Still on the Zero theme and further to the feature on the Jo-Han A6M kit last month, Steve Nelson has very kindly shared these images of his own Rufe model made from the 1/72 Jo-Han kit, a bargain basement purchase for a single dollar and completed about 25 years ago. 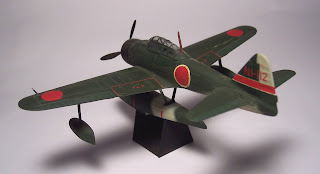 Steve scratch built a basic cockpit and replaced the kit canopy parts with a Squadron vacform. He also replaced the pitot with brass tube and wire. The neat display stand was also scratch built, intended only as temporary and to be replaced by a beaching dolly which Steve never got around to building. 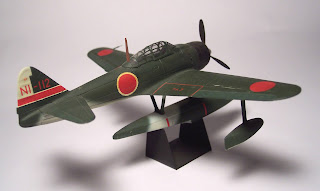 Steve painted the model with the then relatively new but now defunct Polly Scale acrylic paints and as the kit decals were unusable he sourced replacements from spares to represent an aircraft from 802 Ku in the Solomons in January 1943 as profiled in the centre spread of Squadron Signal 'Zero in Action' book. He thinks the hinomaru came from an old IPMS Spruce Goose sheet which he had collected over the years, although he now prefers to mask and paint them on. 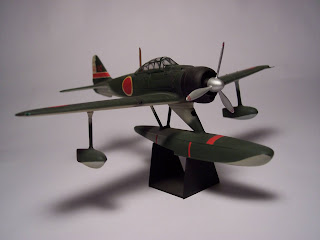 The antenna wire went missing at some point over the years and washing the model to remove dust affected the clear coat. Steve observes that the panel lines are on the heavy side but his model shows that this classic kit scrubs up rather well and certainly looks the part. 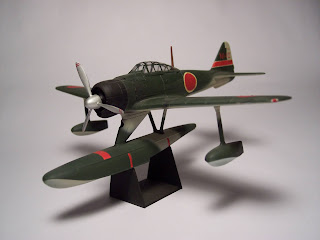 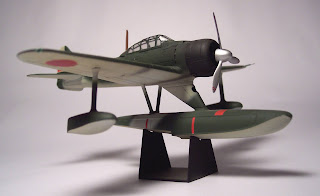 With very special thanks to Steve for kindly sharing these images of his Jo-Han model.

A great result for a kit that dates back 50 years +/-. Thanks for sharing it with us. Certainly some great memories wishing for one of these.

A Super cool "Blast from the Past"...very nice and creative work !

Thanks to Steve and Nick for another thought-provoking posting

Nice job. Especially for such the old kit.

I really like this build. Thanks for sending these, Steve, it still shines after all those years.

The text reminds me it is really time to pull out several builds of my and dust them before it ruins the finish. And I hate doing that, as I'm clumsier with age. But the doors of these Ikea 'cube' cases don't close flush, and even little cracks let plenty of dust in. Still working on the best and safest way to clean built models - would be interested in ideas about that.

Never built a Jo Han but always wanted the Zero kit. Thanks for showing us how nice this model is.

Thanks Steve for sharing your Jo-Han Rufe with us and to Nick for posting it. Your build amply demonstrates how nice of a little kit this was. Its easy to forget in this day and age with all these hi-tech kits that the models most of us grew up building still can provide a charming result not to mention a low cost and low stress assembly. I really love to dust off a classic once in while just for the fun of it. Remember fun? Thats why we all started doing this. Thank you again Steve once again I'm inspired to head up to attic and dig out an old Tevell or Frog kit and see what I can do with it.

Always good to see these 2-in-1 kits from Jo-Han. I built me Hasegawa Rufe in light gray-green but always wanted to do the one your chose. Your build looks good and I appreciate the low stress aspect. Thank you Nick for featuring this nice model and to Steve for letting us have a peak at it.

Thanks for the kind words, everyone! When I built this one, I used a coat of Future to prep for decalling, then a coat of an acrylic dullcoat (probably Pactra, it was my favorite back then.) I've never had very good luck with acrylic flat coats, and this one hasn't aged well. The photos in the article were actually taken several years ago. I tried to clean it to get some better pics, but it just made it look worse. If I get ambitious, I may mask off the canopy and prop, and give it a coat of Alclad flat, my current favorite. I don't improve the appearance, but it couldn't hurt.