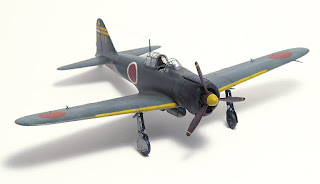 Continuing the Zero theme Zegeye (Zbyszek Malicki) has very kindly shared these images of his Nakajima-built Model 21 special attacker built from the 1/72 Tamiya kit and representing the aircraft of Lt Noburo Miyatake of the 1st Shichisho-tai formed from the Genzan Ku in April 1945. 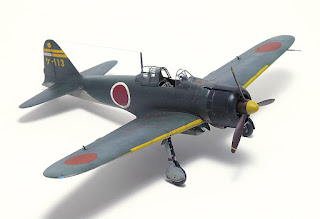 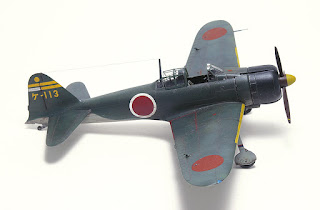 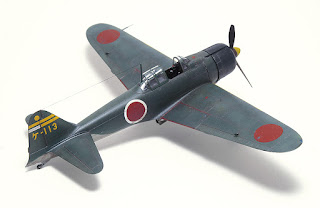 Zegeye painted the model with Colourcoats paints and added a resin bomb rack and 250 kg bomb from CMK. The decals are from the Create 301 set SP72-06 Special Attack Squadrons of 1999. 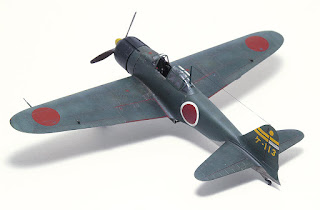 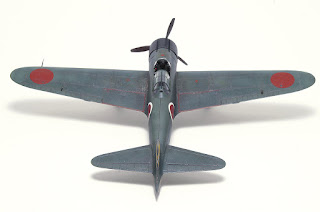 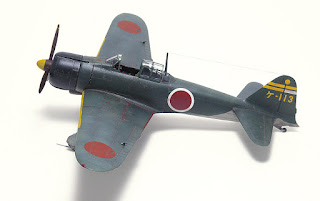 On 6 April 1945 Lt Miyatake led 11 Zeros from Kanoya airfield to attack US ships off Okinawa as part of a force of 43 special attackers from the 1st to 8th Shichisho-tai. Shichisho refers to being reborn seven times and to devoting every life to fighting the enemies of the Emperor.  The idiom Shichisho Houkoku originated from a tale of the Samurai leader Masashige Kusonoki (1294-1336) when besieged by Shogunate forces on Chihaya mountain. Kusokoni and his brother fought against impossible odds, declaring their intent to be reborn seven times before killing themselves. 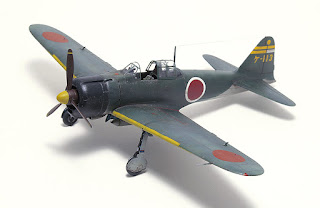 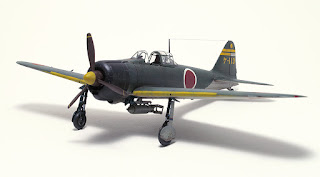 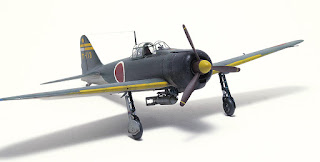 The attacks on 6 and 7 April, were the first of ten numbered Kikusui attacks in the Ten Go operation and involved 125 Army and 230 Navy kamikaze aircraft escorted by 344 other Army and Navy aircraft. A total of 26 USN ships were damaged or sunk during the two days. 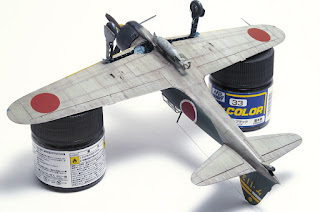 With very special thanks to Zegeye for sharing these images of his excellent model and for his patience in awaiting their publication here.

Nicely done model, very interesting markings. Thanks for sharing with us, Zegeye.

The impressive model, very realistic weathering.
A rare and very interesting variant. Thanks for sharing.

Impressive work and a very nice representation of colors
Thanks, Zegeye and Nick

Absolutely beautiful, and nice to see a version rarely modeled when it comes to Model 21's. I really love the weathering, nicely subtle and not overdone at all.
I plan on using Colourcoats on my current Zero builds, and I hope mine turn out half as nice.

Subtle and effective weathering/ staining. The CMK bomb and rack are a superb addition. Great work overall seeing early Zeros equipped for special attack always reminds me of the desperation of the war at that stage. An A6M2 must have been a dog with full fuel and a 250 kg bomb.

Very convincing work on all counts, Zegeye! I looked at the pictures first, in the large format, and thought it either 1/48 or 1/72. Always fun to be fooled!
Thank you for sharing it with us Nick.