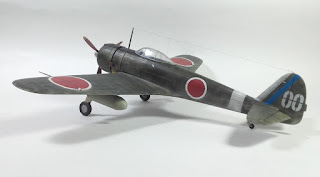 Dario Risso has very kindly shared these images and details of his fine representation of the Ki-43-II Hayabusa flown by Hiko Dai 25 Sentai commander Maj Toshio Sakegawa in China during 1943-44 and made from the classic 1/48 scale Otaki kit of 1972 (now available from Arii). 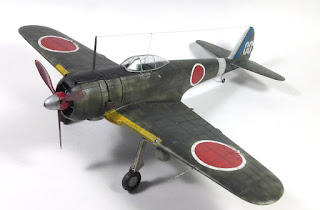 Dario added some detail to the cockpit, cutting away part of the main instrument panel and adding a more accurate replacement made from styrene sheet. He also added instruments decals and photo-etch bezels. A new seat was made using styrene sheet with seat belts represented by masking tape. 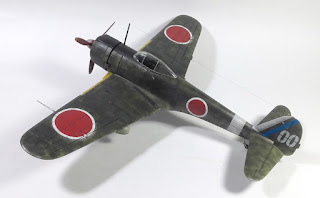 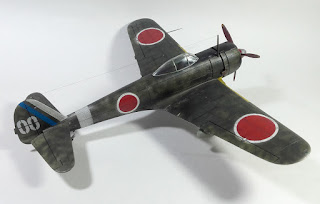 The kit's gunsight was modified too, cutting some parts and adding a pair of clear acetate rectangles for the glass reflectors. Following observations on this blog and the box art, Dario removed the pilot's headrest and drilled some 0.3 mm holes to simulate its fastening points. 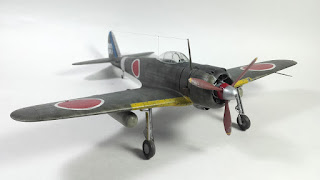 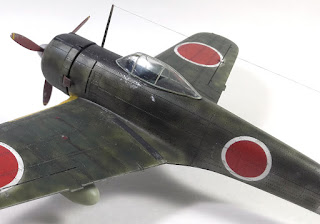 The engine was detailed by adding copper wires (heated with a lighter to make it softer and less duller) to simulate the ignition wires. Other details added were the pitot tube made from hypodermic needle, a landing light on the port wing, starter lug on the spinner, hydraulic lines on the landing gear from 0.3 mm soldering wire, a metal screen inside the oil filter, filler caps on the droptanks and a pair of styrene sheet discs to cover the wheel rims. Dario also inserted a tiny loop of copper wire on top of the fin and then added aerial rigging. 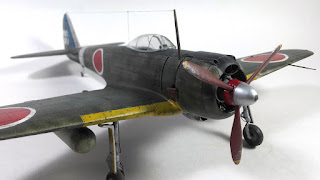 To complete the model Dario airbrushed on a black acrylic primer coat followed by a coat of Vallejo Model Air Aluminium. He decided to paint the aircraft as depicted on the Otaki box art by Rikyû Watanabe with a dense green mottle over natural metal and airbrushed Tamiya XF-13 J.A. Green diluted 50/50 with IPA, then applied the white bands on the rear fuselage and fin. After two coats of Blem floor polish (equivalent to Future/Pledge) he applied the kit decals with Gunze Mr Setter, avoiding using Mr Softener as the decals were so old. Some of the hinomaru wrinkled, so he added more setter and pressed down with a flat brush until to get an acceptable finish. After applying the decals he airbrushed two more coats of floor polish, allowed that to dry for a day and then applied Testors Satin coat overall. The paint chipping was represented with a silver Prismacolor pencil and some sponge-applied Vallejo Aluminium acrylic. 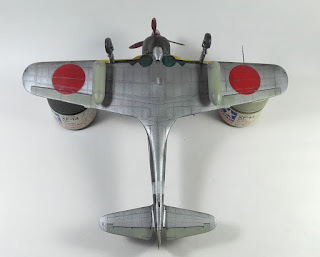 Maj Sakagawa was a 43rd intake graduate from the Army Air Academy in 1931 and after Chutai commands in the 11th Rentai and 24th Sentai, as well as a brief period serving as a flying instructor at Akeno, was promoted to Major in August 1941 at the age of 31. He was then given command of the 47th Independent Flying Squadron when it took the pre-production Ki-44 into combat at the beginning of the Pacific War. He was known in the 25th for personally leading missions, claiming the bombing leader of a B-24 formation over Hankow on 21 August 1943 and three P-51s on 6 May 1944. On 17 July 1944 he went to the Akeno Flying School to become the deputy commander of the 200th Sentai for service in the Philippines from October of that year and on 1 December he took command of the 22nd Sentai there, to inspire a unit which had suffered badly in casualties and morale. He was killed on 19 December 1944 during a night take-off when the transport plane he and other Sentai personnel were being evacuated back to Japan in crashed. 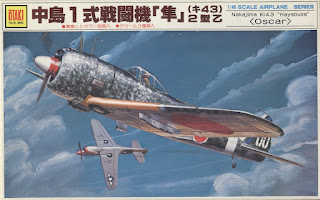 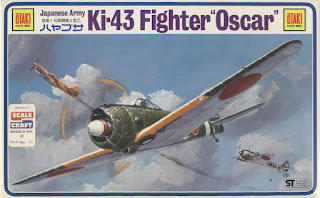 Both the markings and camouflage of this aircraft have been variously depicted over the years, with the rear half of the spinner depicted as both red and brown. A single diagonal tail band in Chutai colours was introduced as the Sentai insignia when the unit began operating the Ki-43-II from May 1943, chosen from a design submitted by Cpl Kennosuke Seshimo. The best photographs of Maj Sakagawa's Ki-43-II do suggest a two-tone mottle camouflage, although that might just be the effect of overspray and/or re-spray. Rikyû Watanabe illustrated two versions of box art for the Otaki kit, both shown above, as well as a splendid fold-out profile for an illuminating article on the 25th Sentai by Dr Yasuho Izawa in a 1973 issue of Aireview magazine. 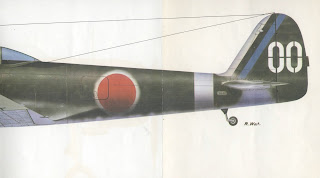 In the article Dr Izawa stated that :- 'Sakagawa's plane had broader (white) band on the rear fuselage and the Sentai mark of 3 different colours'. However all three illustrations by Watanabe-san depict white and blue tail bands (blue being the typical colour distinction for aircraft flown by Sentai HQ flights) whilst his Aireview profile depicts a very dense, almost solid, two-tone green mottle. The fold-out profile is too large to scan so only a portion is shown above. An interesting detail on this profile is the masked around c/n 5640 - a Ki-43-II manufactured in July 1943, whilst Sakagawa commanded the Sentai from November 1942 to July 1944, so undoubtedly flew other aircraft.

More recently the mottle has been depicted as green and tan with tail bands in white, red and yellow from front to rear. But even Model Art No.395* appeared undecided on the camouflage as the profile in the book shown above depicts a dense green mottle over brown (or vice versa) whilst the caption to a photograph of the actual aircraft on page 83 states:-
'Renowned as the leader of the cream of the Army fighter squadrons, Toshio Sakagawa of the 25th is shown here ready for take-off at Hankow airfield in the spring of 1944, sitting in his II Otsu '00'. The main body is differently camouflaged from normal; on top of green and brown dense speckling, even darker green fine spots have been added  This is seen well on the covers of the wheel legs. The hinomaru white border is slightly ragged due to the overlapping of the camouflage. The spinner is white in front, brown behind and the recognition band at the rear of the fuselage is white with a fine red border. The squadron marking from fore to after is white, red and gold (yellow) with the aircraft number 00 stencilled on. The underwing racks are retained but the pilot's rollover pylon has been removed.' 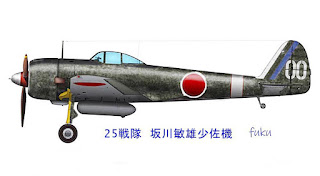 If the overpainting was true then it is quite possible the aircraft went through a succession of camouflage appearances during its service life and more than one aircraft might have been flown by the commander. Prolific Japanese artist Fuku illustrated the white and blue tail band colours of Maj Sakagawa whilst depicting a heavy green mottle over natural metal, as shown above. The solid, medium green finishes of other Ki-43-II aircraft delivered to the Sentai were quite possibly modified or added to when worn or in order to better suit local conditions in China as with other fighter Sentai, but a mix of solid and mottled aircraft were flown, the mottled '15' of Sgt Kyushiro Ohtake of 2nd Chutai being well known. 1st Chutai 19-victory ace 2Lt Moritsugu Kanai flew Ki-43-II '05' c/n 6925 (manufactured in March 1944) with a solid dark green upper surface and the original white senchi hiyoshiki so-called 'combat stripe' painted over, reportedly in brown. The variance of solid and mottled finishes was not chronological but related more to the urgency of replacement and the resources of time and paint available at Army depots. 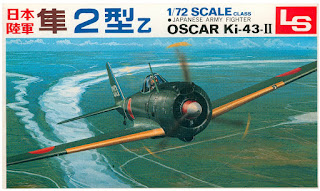 The LS 1/72 Ki-43-II kit's 1983 box art by Kihachiro Ueda also depicts white and blue tail bands with an apparently solid medium green upper surface scheme, but the Arii release of the kit with the same box art now includes white, red and yellow tail band decals with a frank and refreshing note about the uncertainty involved but simply making that choice! 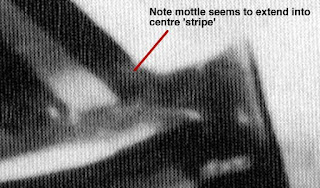 From the photograph there is the merest hint of the mottle camouflage continuing up between the first and third band, suggesting that perhaps there were only two bands as depicted by Watanabe-san, and the tone of the central part does not seem quite as dark as the border of the fuselage band (which also seems to have a lighter border next to the red (?).  Can a firm conclusion be drawn? Probably not. Which leaves the subject open to an enjoyable interpretation based on personal belief or preference. Any one of the various depictions might inspire the completion of a model from one of the several Hayabusa kits available and both versions of the tail markings are splendid, so let it be so.
With very special thanks to Dario for sharing his excellent modelling here. It is a delight to see and show another classic kit so skilfully improved and presented.
* 'Camouflage & Markings of type 1 fighter HAYABUSA', Model Art No.395 (Model Art Co. Ltd., 1992)

Great to see the classic Otaki kit improved so expertly. It's in my stash, and I plan similar modifications but I'm not sure it will turn out as nicely as Dario's model.
Thanks Nick for the history and camouflage notes, most helpful as always.

Dario, Nick,
Thanks for this fine post. It's one for the printer and the file! I like the model very much, and the thoughtful work and interpretation it shows. Old as this kit is, shape-wise it captures something about the Oscar that most other kits don't. Kudos on the history of Sakagawa, and the interpretation of his markings over the years. Most of us don't have these sources, thanks for sharing them.

Indeed, as well noted by all, the Otaki kit "just looks right" and is a real testament to the still amazing value of some older kits.

Very interesting notes concerning all the speculation on the actual markings ...fascinating stuff ..

The nice model. Especially for so old kit. Thanks for sharing. I think it's very interesting and unique investigation for the Sacagawa's Hayabusa.

Very nice model and excellent writeup about the markings. These kind of discussions is why I enjoy visiting this site. Well done Dario and Nick.

Thanks all for the appreciative comments.

It really is great seeing the older kits built, and built so well. Great work, Dario, thanks for sharing it here with us.