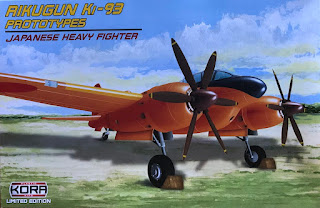 I'm grateful to Peter Zanella for alerting me to the release of this 1/72 Ki-93 kit from Kora, available in prototype (shown above) as kit KPK72133 and three projected variants. It is injection moulded rather than resin but comes at a 'resin price' of no less than €66. The Ki-93 was bigger than a DH Mosquito though, eight feet wider in wingspan and five and a half feet longer, and only slightly smaller than a Junkers 88. The parts layout shown below looks good but more anon. The three other projected variant kits are KPK72134 Ki-93-1a Heavy Fighter, KPK72135 Ki-93-1b Anti-Shipping Aircraft and KPK72136 Ki-93-1c Ground Attack Aircraft. 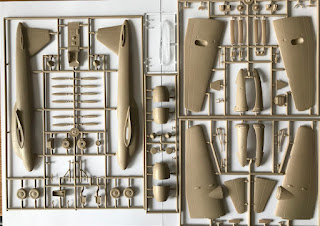 The Ki-93 design is intriguing and over the years inconsistent descriptions of its intended purpose and development have varied by source. The May 1977 Air International article, reportedly drawn on Koku Fan data, positioned it in imitation of the Messerschmitt Bf 110, intended as a heavy escort fighter, but the designation in several early Japanese sources 陸軍航空(技研)工廠 キ-93  試作地土襲撃機 - is for a ground assault plane. That ties in with the official specification which called for an altitude rating of 8,000 metres (just over 26,000 ft) down to very low-level with 13mm armour plates positioned internally around the nose to protect the pilot from fire directed from below and ahead. The 1977 article describes the underslung main armament as the 57mm Ho-401 but the Japanese specification was for the Ho-402 being a long-barrelled 57mm anti-tank gun. Originally a 30-round magazine was proposed but centre of gravity and weight adjustments saw this reduced consecutively to 25 and ultimately 20 rounds. In addition to the main armament the Ki-93 also had a single Ho-5 20mm cannon in each wing root positioned close to the fuselage to fire free of the arc of the propellers. As the aircraft was considered vulnerable to attack from enemy fighters whilst performing its main role a flexible, rear firing Ho-104 13mm machine gun equipped a second crew member.  The ground attack or anti-tank role was reportedly conceived in response to Nomonhan and the perceived threat of Soviet tanks, making the design concept more akin to a beefed-up Henschel Hs129, although the imported Me 210/410 influenced the design. In its original form it is difficult to project a convincing high-altitude anti-B-29 role and the B-29 may have come into it only as a potential target on its airfields rather than in the air over Japan, with something perhaps lost in translation. The design concept was slightly re-purposed in November 1944 in response to the war situation for low-level attacks against seaborne landings and their supporting vessels. Installation of a 75mm cannon was considered but not pursued.  The multi-role concept involving B-29 interception is also put forward in 'Japanese Secret Projects' by Edwin M Dyer III (Midland, 2009) but is not evidenced by the original Japanese documentation.

The first prototype was damaged in a landing accident and subsequently destroyed in its hangar during a B-29 raid on the Army Air Arsenal at Tachikawa on 19 May 1945 (US Strategic Bombing Survey* report states the raid was on 9 June 1945). A total of 29 B-29s from 313th BW, 6th BG targeted the facility, 18 bombing visually and 11 by radar (according to US Strategic Bombing Survey - but  a mission listing states 30 up and 25 bombed**). Damage was light but included two of its four aircraft hangars including that containing the repaired Ki-93. Tachikawa was also the location of the Tachikawa Hikoki K K factory as well as the Army Air Arsenal and the Army's Technical Research Institute, the proximity of all three causing some confusion for writers describing the Ki-93 (and other developments). The Army Air Arsenal had been manufacturing the Ki-51 'Sonia' at the rate of about 22 a month during 1944 and had also produced 49 Ki-43 'Oscars' as well as a single Ki-67 'Peggy', production being curbed by the transfer of personnel to Mitsubishi and plans for dispersal against the threat of bombing raids. It had also been busy producing aircraft engines for the Ki-45 'Nick' and the Ki-84 'Frank'.

The second prototype Ki-93 was moved to Takahagi where it fell into US hands intact during the occupation. That machine was given the designation FE-152, later T2-152, and transported to the USA where it was recorded at Middletown Air Depot on 10 March 1946. No photographs seem to exist or have surfaced and although recorded as being restored during September 1946 for inclusion at the proposed Air Museum at Park Ridge sadly it disappeared from the record after 1949.

The original colour scheme is uncertain. Kora opt for orange on the box art whilst other depictions include a grey green or light green finish. Monochrome photographs suggest an overall mid-toned colour scheme with the wing leading edge IFF strips showing lighter against it, and a distinctive, darker colour swept around the cockpit and over the nose. The tone of the main airframe is similar to that seen in some photographs of the Ki-46 interceptor variant so could possibly be a khaki colour. If that darker segment was intended as anti-glare it did not extend to the engine cowlings. Tonally the dark area on the nose appears similar to the spinners and prop blades. There is no hint of a lighter under surface colour but recently two contemporaneous reports were encountered describing Army aircraft in an overall blue grey finish but with a lighter tone on the under surfaces. Whether that was deliberate or simply resulted from a darkening of the more exposed upper surfaces contrary to conventional wisdom about paint fading is unknown. If the design had proceeded into service it would probably have been finished in the late war # 7 olive brown colour or the blackish-brown # 43 earth colour. A modeller has plenty of leeway in deciding colours.

Thanks for the post on the new Ki-93 kit from Kora, Nick. And yes, 'resin price' indeed! Quite steep for me: although this is the first opportunity, as far as I remember, to get an injected plastic 1/72 kit of this aesthetically pleasing prototype, I think I'll pass...

I just got this kit which Im glad to see in injected form as it is much overlooked. Compared with the old A+V Models resin kit it is very similar, panel lines ect. But much better detailed. Still, like all Kora kits it requires full access to ones wallet. And with 4 different boxings you have to pick your poison. The ground attack version comes with resin bombs and racks the rest seem to differ only in decals and what if schemes. The six bladed props have seperate blades which is already making me get a nervous twitch. Yikes!!!!

Six separate prop blades per engine! Hope they are not charging extra for that, and it assures me this one won't 'fall together.' Hope there is a tool included for setting the pitch.

Kora products that I've seen are nice. I've seldom seen many though, even at all the shows I've attended. People are not willing to pay the asking price.
Shops don't stock them for the same reason. I'm a realist - we can't go back to the days when, if a desired new kit came out, many bought multiples because they were reasonably affordable. But this kit's price assures not only that such won't happen, but that most will pass on buying even one; few are able / willing to spend that much on a 1/72 twin, unless the intention to *build* it is there. And a lot of those same folk would have paid handsomely for the kit, because they collect Japanese 1/72 aircraft. But a price like this puts it in an 'exclusive category.' For most, it excludes the possibility of purchase!

This is part of how 'collecting' has changed; if one collects 1/48 Japanese a/c, for instance, there might be two or three Nichimo Ki-51 Sonias in the loft, with the intention to build one or two eventually having prompted the purchases. Now that the Nichimo kit has been trumped by a better one by Wingsy (and face it, not *that* much better from three or four feet), the question is - in the US - will you part with eighty bucks for one? And I don't know anyone who has two!

Forgot to say thanks, Nick, for the background on this mysterious a/c, as usual stuff I don't remember reading elsewhere. Also the notes on the Tachikawa sites and their different associations, which can clear up certain confusion.
As the bumper sticker says, 'Eschew Obfuscation!'

I never thought we'd see some of the Japanese aircraft we're seeing produced in injected plastic form. We live in some great, yet interesting times.

Thanks Mark. I appreciate your kind acknowledgement.

Thanks for this notice of the Kora kit & your scholarship, Nick. I suspect this prototype would have have required a longer period than most to solve 'teething' issues.

The kit's parts look better than that abomination of a box art would suggest! Would be good to see one built up.
Thanks for the extensive write-up on what I consider to be one of the most aesthetically pleasing shapes produced by Japan in WW2. If only for some decent box art to do it justice! ;)