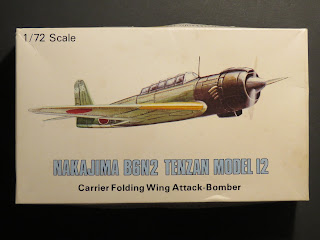 Back in June, 2020 reader G.T. Roche kindly shared details and images of the New Zealand based Toltoys 'Panda Kitset' re-issue of the Nitto 1/75th B5N2. Recently he very kindly provided details and images of another Toltoys re-issue he has encountered, this time of Nitto's Nakajima B6N2 Tenzan Model 12 'Jill'. Originally marketed by Nitto as being to 1/75 scale, with Burns giving a release date of 1964, the Toltoys packaging showed the scale as 1/72. The kit was also released by Air Flash in France with the original Nitto box art whereas the Toltoys box art appears to be unique and in their house style of a simple but attractive in-flight image of the aircraft against a plain white background. 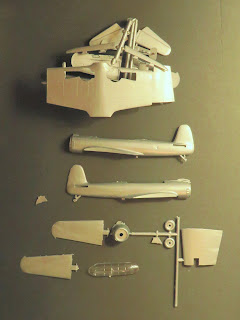 According to Burns Nitto Kagaku, based in Tokyo, began producing plastic kits in 1962. Whilst most of the kits they issued were to scales of 1/75 and 1/77, a Douglas C-47 was issued in 1/100 scale and their two best known kits are perhaps the Yokosuka K5Y1 and K5Y2 'Willow' in 1/32 scale. Kit production ended in 1982 and some of the moulds were acquired by Doyusha in 1986. 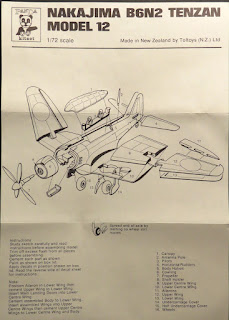 The instructions are quite comprehensive - a single sheet with a clear exploded view with numbered parts, a numbered and named list of parts and written guidance. Painting instructions are limited to following the box art. The decal sheet consists of hinomaru in six positions, all with white borders, yellow wing leading edge IFF strips and the white tail code '601-315'. The interior of the kit consists of a single piece inset with integrally moulded upper torsos and heads of the pilot and observer (probably quite effective if carefully painted under the less than crystal canopy transparency). Kit moving parts, a feature typical of the time. included revolving wheels, retractable undercarriage, moving ailerons and folding wings. 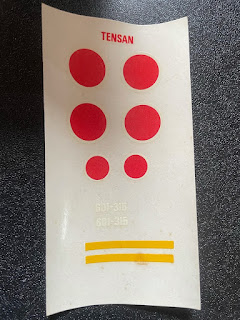 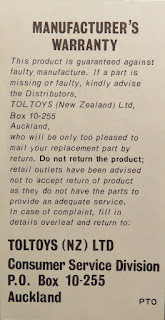 In an era of modelling 'feeding frenzy' over ever increasing releases of super-authentic kits in larger scales it is easy to forget the humble pioneering efforts of companies like Nitto which in the 'early days' brought many interesting and relatively unknown Japanese aircraft types to the attention of Western modellers. Appearing crude by today's standards and indeed manufactured as 'toys' rather than serious scale models, the kits nevertheless made an important impact then as so often representing the 'only game in town' for a comprehensive collection of Japanese aircraft models. In those pre-internet days, and strange though it might seem now, Japanese aircraft like the B6N2 were far less well known or documented. The Fujimi 1/72 B6N1 and B6N2 kits did not appear until 1983 and 1984 respectively and were re-released by Hobby 2000 in 2019. 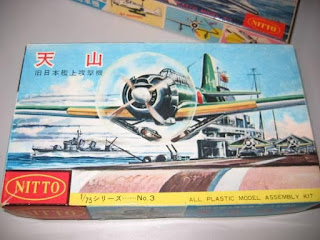 With very special thanks to Mr Roche for kindly sharing these gems of kit trivia discovery.

"In an era of modelling 'feeding frenzy' over ever increasing releases of super-authentic kits in larger scales it is easy to forget the humble pioneering efforts of companies like Nitto which in the 'early days' brought many interesting and relatively unknown Japanese aircraft types to the attention of Western modellers."

So very true. We modellers with exotic predilections (why build Japanese aircraft, there are so many interesting Western types?) owe a lot to those pioneers - they sparked our interest in the exceptional.

Thanks for sharing this oldie!

I must admit that a lot of my knowledge of Japanese aircraft in the 1990s was from the Aces of Pacific PC game and building model kits, which led to generic Pacific War aircraft books, then to Martin Caidin, Boyington, the Bantam books, and building more and more PTO and IJN/IJA 1/48 models.

It was a great time, and though I put modelling aside for many years, my interest in the planes and battles didnt't wane. Fortunately I found this site, and others, which eventually helped me get back into the hobby in late 2019.

It is such a nostalgia and so heart warming to see these kits ( re-issued too) that have filled our days when we were little more than young boys! I always appreciate these precious drops from our past. Thank you, Nick!

Thank you Mr.Roche and Nick for sharing this bit of kit nostalgia. It is easy to forget on this day and age of high tech kits that it all really started with these humble beginnings. I recall when I first became seriously interested in Japanese aircraft and subscribed to the great John Burns's Kit Collector Clearinghouse the Ikko Grace, Nitto Jill and Okamoto Ki-115 were the "holy grails" for me. And I found them and relished the fact that at least somebody had made a kit of these obscure planes no matter how toylike they were. Within a few years all of them became, thankfully, eclipsed by true scale replicas but I still enjoy looking at these old kits and the memories they bring back of a simpler age. The hobby we have now owes its existence to the groundwork laid by these early kits.

This post made me think of many things, but especially a a long-lost catalogue I sent for from Universal Power Master when in junior high school. I wrote a US address (can't remember where) and they sent it for the price of a stamp. It contained was all the box art for each kit they distributed in color, and was my first exposure to many exotic types. UPC kits only made it into the hands of US enthusiasts due to this fairly short-lived venture of what I think was a much larger business, and while I know there were some Nitto, Marusan, and Fuji kits, I'll bet others out there can identify other early companies. That doesn't mean they were always easy to find, and many in the catalogue I never laid eyes on. It was a mere booklet, but if anyone out there has one I would love for them to share some images. The ones that had me hooked were the 1/50 ones, like Marusan's Babs and Dinah, and late friend Jay Dial told me that Kikuo Hashimoto designed the Dinah, which was a fine kit for its day.
Thank you for this post which no doubt made many smile!

Not much more to add other than I am in complete agreement with all the well-written expressions of our fellow bloggers....other than to note that the brilliant box-art that is still exciting to this day

I forgot to mention as my previous comment drifted back to yesteryear that as Rob said the box art was classic. Obviously that Tenzan pilot was one of exceptional skills to be pulling up his undercarraige before he even cleared the deck!

Thanks for this trip down memory lane. Like others here, I too remember learning about Japanese aviation in WWII through model kits such as this. Also, I had my passion for aviation in the PTO rekindled by the Dynamix* PC sim "Aces of the Pacific" in 1994, and it's been burning ever since as a result.

*Dynamix was a great company and produced some excellent sims and strategy games in the 90's. I hated to see them go under.

Thanks all. I'm surprised but delighted by the responses as I worry that these blogs about 'old stuff' and kit trivia might not be of much interest in these heady days of almost continuous new kit feeding frenzies followed by the apparently inevitable 'fatal flaws'!

Nick,
We truly suffer an embarrassment of riches when it comes to new kits. Please do keep posts of "old stuff" coming.