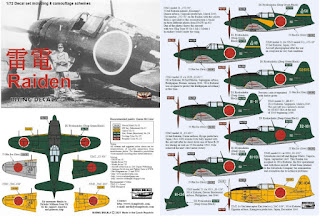 RD72099 is one of three splendid Rising Decals sheets for IJN fighters in 1/72 scale with markings for eight Mitsubishi Raiden subjects as follows:- 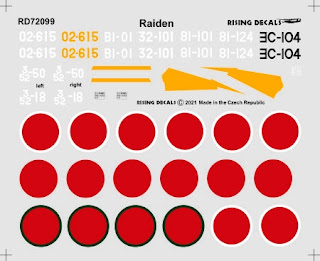 Recommended kits are Sword and Hasegawa, the latter a J2M3 from 1977 but with engraved panel lines and still intermittently available, also in combi special editions from time to time. Sword offered three Raiden kits: the J2M3 Model 21 from 2011; the J2M5/6 Model 33/31 from 2012; and the J2M2 Model 11 Late Version from 2015, although all now seem hard to find. No doubt these decals could also be adapted for the old Tamiya and Nichimo kits for some upgraded retro modelling. Raiden is seemingly a 'marmite' subject, either strongly liked or disliked, and true enough schemes and markings for the type offer little variety. However this set offers something different from the classic and well-known 302 Ku schemes, some of which feature on Rising sheet RD72094 here. The 381 Ku examples are especially welcome but sadly Raiden subjects from the China-based units are conspicuous by their absence.  Maybe next time . . .
With special thanks to Mirek of Rising Decals for the review sheet and apologies for the delay in presenting it. Late to the party as usual.
Image credit: All © 2022 Rising Decals
Posted by Straggler 脱走兵 at 15:26

As always, thanks for making us aware of this new release from Rising, I always find their subjects interesting. I've always had an interest in this aircraft ever since building the 1/32nd Revell kit when I was a kid in the 70's. I missed out on the Sword kits, but managed to get one of the Hasegawa "combos".
It's as you said though, not a lot of variety there.

This is the first I've known of this one, so 'late to the party' is relative! Mirek's decals are so good, often 'under the radar' (at least mine) and it doesn't seem they are reissued, so the notice is always appreciated, Nick. Nice review of subject a/c as well.

By the way, my wife's stepfather worked for Bechtel Engineering and had an extended assignment in Borneo. I remember he corrected me when I asked him about the city, noting that Balikpapan pronounced by the locals, 'Bali-poppen'.

Mark, thanks for the pronunciation guide on that!

I just found out yesterday the two color schemes for my Tainan builds on his sheet are wrong. :( :( :( Not Marek's fault, just new research came along.

Seems an odd comment to make on a blog article reviewing the Raiden sheet which has no Tainan subjects. Which sheet are you referring to, what is wrong and what is this 'new research'? I'd welcome the opportunity to scrutinise them, thanks.

I got this decal set and its very nice as are all of their products though variations on Jack are admittedly mostly just tail codes. I do like the speculative schemes. Marks right get them while you can. Im still kicking myself for several sheets I missed and there seem to be little on the way of re-issues. Does make me want to do a retro build with the old Tamiya J2M which I always thought looked charming.:)

Very nice decal sheet of my favourite IJN fighter. While it is true that there is little to no variation in Raiden markings, I find the weathering of these planes to be a challenge and something that makes them distinct from each other. For instance, you can see quite a lot of flaking/chipping on aircraft that otherwise are very glossy. Then there are the Raidens found in China, the Philippines, or North East Indies, and they have a much flatter paint due to weathering and possibly dust. Each time in build a Raiden (2 out of 3 completed in 1/48), I try to paint it in markings that I haven't seen before replicated on a kit, it breaks the monotony of the "usual suspects".

Thanks as always Nick. I just received the 2 new 1/48 sheets on the Zero from Rising, and they are both beautiful. Will be using one of them on my Eduard Model 21 that is slowly but surely being built.

Nick, good to see you back. Thanks for posting these. Ah, if only I had not completed my Jack already. This decal sheet is really cool to me because I did not know that Raidens were based at Balikpapan. I know Shokis were ( thanks to an Osprey book by an esteemed research writer ) but I did not know that Jacks got that far south. Thanks again for posting.

I don't usually post anonymous comments but yours was too kind and friendly to pass up! :-) It would be nice to know who you are though!
Regards
Nick