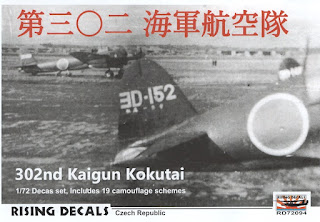 302 Ku was a distinguished IJN air defence unit formed in March 1944 at Kisarazu, trained at Yokosuka and setting up home at Atsugi, but despatching detachments to other airfields as and when its defensive posture required. Its primary mission was the interception of B-29 attacks at high altitude, modified by the development of those attacks, and it operated a variety of aircraft which are well and generously represented by no less than 19 subjects catered for on this recent Rising Decals bumper release. Sheet RD72094 offers the following subjects:- 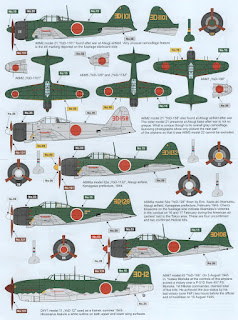 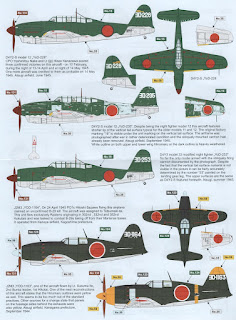 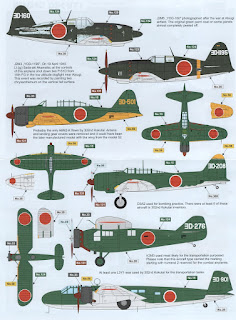 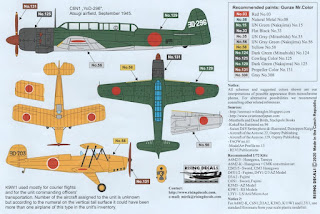 Here is a very well chosen collection of subjects and schemes which ably demonstrate the diversity of aircraft flown by this unit with a mixture of the well-known and the rare. Only hinomaru for the Zero, Raiden, Suisei and Saiun subjects are included and the rest must come from the kits or generic sheets. A  night fighter Zero subject would have been welcome, but mainstream out of the box kits for the night fighting Zero in 1/72 scale (and A6M2-K trainer) are still awaited, although they have been released in 1/48 scale from Hasegawa. Studying the photo of YoD-208 reproduced in Koku-Fan Illustrated No. 96 does not convince that the fin tip was yellow as the trim tab, part of the lower fin and fillet show the same tone. The impression is possibly the result of variegated paint and/or re-painting. The small rectangular panel above the tailplane appears to be the same colour as the under surface. The photo caption also suggests that the tail code might be yellow although it appears white? 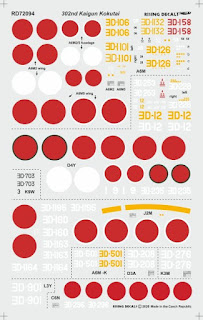 With very special thanks to Mirek of Rising Decals for the review sheet.
Image credit: All © 2021 Rising Decals
Posted by Straggler 脱走兵 at 15:29

A fantastic sheet! Thanks for making us aware Nick.

A veritable bonanza of interesting subjects ..I think I'll start with the little K9W1 bird.

Thanks to the Rising group and Mr.Nivk !

Thanks for this notice, Nick. An impressive range of subjects is presented.

WoW. A lot of interesting variants of planes. Very useful. Thanks.

I had this sheet of decals ordered from Hannants when this blog was posted now I am more excited to get it. Thanks Nick for the review of it. 302 had so many a/c and different variants. Cool!

Most of the time, if I didn't see a new Rising sheet reviewed here, I wouldn't hear about it in time to get it! Thanks. I am interested in knowing whether the Out of Stock sheets will ever be available again, so as to not miss them again. They are beautifully done.