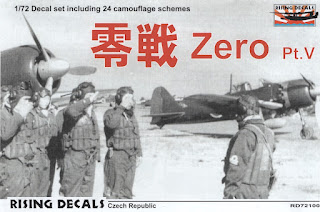 Another bumper Japanese subject decal set from Rising Decals in the form of RD72100, Part V in their series of 1/72 sheets for the Zero and offering no less than 24 markings options. This set includes the following subjects:-

The six subjects above provide a good representation for the Zero fighter's significant debut over China. The two-tone appearance is mentioned but a reason for it is not suggested. The question of red or blue fuselage bands is perennial and there is some belief that both colours were used to denote different Hikotai (or other sub-formations) within the Kokutai. Successive Japanese editions of Hata & Izawa's IJN Fighter Units and Aces have a cover painting by R Watanabe said to depict the 26 May 1941 mission against Nanning, and that 3-138 was being flown  by Kunimori Nakakariya whilst 3-143 was being flown by Masayuki Nakase. Nakakariya survived the war and was one of the sources consulted by Hata & Izawa. Those two aircraft, in the foreground, are depicted with blue fuselage bands, whilst a formation of Zeros flying further ahead in the background of the painting show red fuselage bands. That accords to some extent with testimony from Tetsuzo Iwamoto. He stated that at the time of the big raid on Hankow on 29 April 1938 in which he took part, the aircraft of 1st Hikotai had their fixed undercarriage covers painted red, while those of 2nd Hikotai were painted blue. Osamu Tagaya, to whom I am very grateful for an illuminating 2017 email discussion about this subject, suggested that although photo evidence shows that the practice of painting the undercarriage covers was later discontinued, that basic system of colour differentiation continued, and was revived in the form of fuselage bands at some point, and carried through into the A6M phase. He noted, however, that the then latest Japanese edition of H&I had colour profiles of Zeros 3-112, 3-141, 3-182 and 3-183, all with blue fuselage bands. He suggested that the colour of the bands may have depended on the number of aircraft available and whether only one or two Hikotai of aircraft were operational. The 26 May 1941 mission was flown with 20 aircraft with a No.1 Sentoki-tai (fighter unit) consisting of nine aircraft, and a No. 2 Sentoki-tai of 11 aircraft. Nakakariya is listed under No. 2 Sentoki-tai. This gives some credence to Watanabe's artwork depicting Nakakariya's Zero with a blue band and is also consistent with Iwamoto's testimony for the 29 April 1938 mission during the Type 96 Kansen period that 1st Hikotai had red undercarriages and 2nd Hikotai had blue. Watanabe's painting is a single picture that wraps around both front and back cover of the books, thus giving the impression that the blue-banded formation and the red-banded aircraft in the forward distance are part of one large group.  However the kodochosho records that the two formations flew separately in two waves, with No. 1 Sentoki-tai taking off at 1000 hrs and No. 2 sortying one hour later. 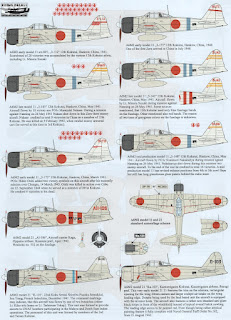 That red and blue digression aside, the decal options continue with:-

These nine subjects represent excellent and interesting choices to model Zeros operating in less well known areas and with some unusual unit identities. 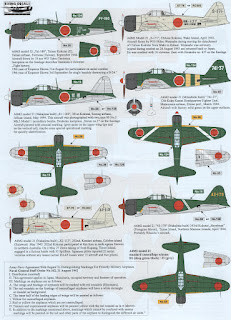 The remaining nine subjects are all A6M5 Model 52 subjects as follows:- 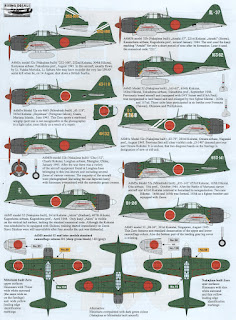 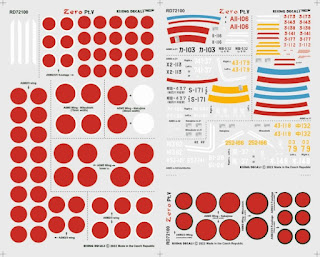 This a most interesting and useful super set for 1/72 scale Zero modellers featuring a number of more unusual subjects. The inclusion of alternative decals for the blue or red fuselage bands is a nice touch and there are several additional and very welcome captions providing general information about colour schemes.  Rising Decals sets are out of stock quite quickly so apologies for any frustration this late review may cause. Hopefully Rising will offer second editions of some of the more popular sets. As with the Shiden and Shiden-kai set this one is remarkable value. As well as covering some of the recent Zero kits in this scale the sheet will be applicable to older kits, especially where the kit decals have not survived. It is highly recommended.

With special thanks to Mirek of Rising Decals for the review set and to Osamu Tagaya for his valuable comments regarding the question of 12 Ku fuselage band colour.

Wow !!!.. I suppose we all need to now get our Zeros moved up on the production queue !

Thanks so much for posting this Nick. I don't see them in stock anywhere yet, but I'm definitely keeping my eyes peeled for these.

Great selections here, and many intriguing ones off the beaten path. Thanks for the heads up, Nick, and for images themselves posted in such high quality.

These are in stock at Hannant's now, and yes I ordered a set. :)

This decal set is outstanding. Mirek, with the help of a certain Japanese aviation guru, has produced a plethora of unusual and interesting schemes. My Airfix A6M2 is getting the 381 Ku markings with the underwing bombs. Kudos to Rising Decals.

Thanks for this notice & sharing your research notes, Nick.