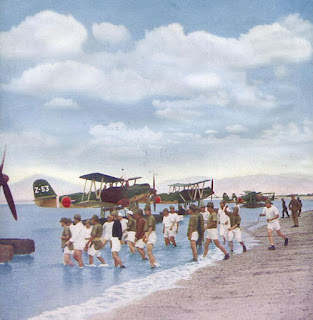 In March this year AVI Models released a quartet of new 1/72 kits of the Kawanishi E7K1 and E7K2 'Alf' floatplanes as follows:-
AV72020 E7K2 'Alf' Carrier Observers presents the radial engined development of the Navy Type 94 Reconnaissance Seaplane offering a choice of three subjects on the decal sheet as follows:-

The E7K2 Type 94-II variant of Alf has not been kitted before, although in 1994 Gartex released the Hasegawa Type 94-I 'Alf' of 1970 vintage as kit GA:5 with additional resin parts to complete it as the E7K2 radial engined variant (box shown below). The Gartex kits were expensive at the time and quite difficult to obtain even then. A very fine build of the Gartex kit on catapult by Morimoto Oyama may be found here at the excellent Japanese Web-modelers site. 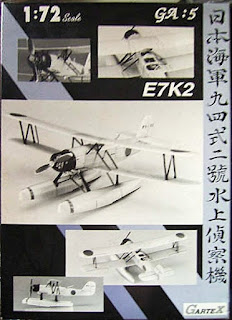 AV72024 E7K1 'Alf' In Camouflage presents the inline-engined Type 94-I offering three subjects on the decal sheet as follows:-

AV72025 E7K1 'Alf' In Silver presents the same variant and offers a choice of three early uncamouflaged examples on the decal sheet as follows:-

The original Hasegawa release of the E7K1 in 1970 presented only one subject, a silver doped and red tailed 'Alf' from the cruiser Mikuma, but the tailcode on the original decal sheet looks more like MiWaMa (ミワマ) than MiKuMa (ミクマ). From 1972 the kit was distributed in the USA by Minicraft Models Inc., with their logo print-added to the box front (shown below) and by Hales in the UK with a logo sticker on the box front.

New box art was introduced from 1973 with three subject options for two silver doped aircraft from Maizuru and Yokosuka Ku and a dark green aircraft from the battleship Kirishima. Since then the Hasegawa kit has been repeatedly re-issued, sometimes with a ship's catapult included and most recently as a combo kit with the E13A1 'Jake' in 2020, both representing aircraft of the Ominato Ku. A venerable kit and the only game in town for 50 years, there are many fine examples of it built and improved, as shown in this modelling thread. But a detailed replica required work and the AVI Models kits more than adequately address its shortcomings. 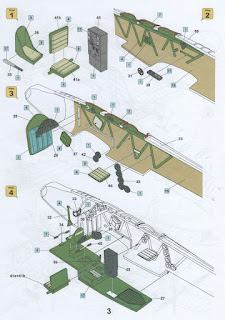 The AVI kits, moulded in grey plastic, are finely moulded with delicate surface detail, the stressed fabric effect and panel detail being finer and more subtle than on the older Hasegawa kit. The kits contain two identical sprue frames with the alternative fuselage halves for each version left on the frame for the relevant variant. They consist of around 76 parts (depending which variant is to be built) rather than the 47 parts of the Hasegawa kit.  Whereas interior detail in the older kit is restricted to a floor, three identical and crude 'armchair' seats and three identical crewmen, the AVI kit is furnished with floor, accurate pilot and crew seats, control stick, rudder pedals, forward bulkhead and instrument panel, radio equipment and sidewall framing with separate instrument details, as well as spare machine gun drum magazines. The instruction sheet (above) shows all these parts in colour and with paint references, a nice touch. The Hasegawa kit has two side window transparencies but these are not included in the AVI kit, nor is the framework around these windows depicted. The AVI E7K1 kit appears to be based on the later production variant with two semi-elliptical hand/foot holds instead of the windows, the same configuration being on the E7K2. Late model E7K1 aircraft were also sometimes fitted with a circular RDF loop or fairing behind the rear cockpit. The fairing is included in both kits (part # 83), possibly a little under scale, but not the loop. Ditto the optional wind-driven generator on the starboard rear fuselage (part # 65). Exterior cockpit details consist of two windscreen transparencies for pilot and navigator's positions and a gun ring and very neatly moulded Type 92 machine gun for the radio operator/observer's position. There was also a re-modelled variant which had the ventral machine gun removed and re-positioned in the central cockpit, providing for two dorsal machine guns. Bomb racks and four bombs with separate fins are also included in the kits, again very neatly moulded. 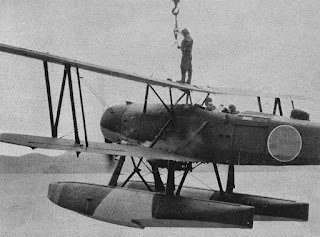 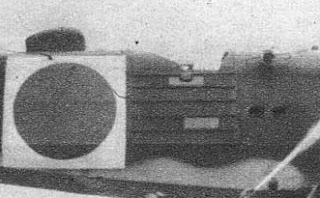 The distinctive ribbing frames either side of the radio operator's position were sliding panels that could be drawn up to completely enclose the rear cockpit (see photos above), presumably to help protect the radio equipment from spray. They appear to have been fabric on metal frames for the E7K1 but possibly all metal on the E7K2. On the E7K2 there were small rectangular windows in the forward side of the second lower 'rib' and centrally on the upper fifth 'rib' of the sliding panels but these windows are not represented on the kit parts and the panels are moulded integrally with the fuselage halves. A detail for some aftermarket photo-etch perhaps?
The breakdown of kit parts is conventional but care will be required in assembling the struts as location positions are marked with shallow indentations. Float pontoons consist of three parts, two sides and an upper panel, allowing for more detail on the latter compared to the two part Hasegawa mouldings. The four bladed prop on the E7K1 consists of two two-bladed parts with the spinner moulded integrally with   the forward pair of blades. The radial engine of the E7K2 consists of four parts with both rows represented as fully formed separate parts, a firewall and a gear casing through which a hole must be drilled to accept the two-blade prop. The cowling consists of two halves with the cooling flaps moulded in the open position - and quite finely done. Exhaust pipe parts in both kits are more finely moulded and detailed than Hasegawa's single stack, radiator parts ditto.
Exterior colours are referenced to Gunze Mr Color paints with No.15 IJN Green (Nakajima) suggested for the dark green, No.133 Earth for the brown and No.315 Gray FS 16440 for the under surface grey. Decal sheets are by Rising Decals and sharply printed with good colour saturation.
These are excellent kits of a handsome and ubiquitous IJN biplane seaplane presented in both its variants with interesting subject choices, and which will repay care in assembly and painting. With special thanks to Mirek of Rising Decals for kindly providing kits AVI72021 and AVI72024 for review here.
Image credit: Box details and instruction extract © 2022 AVI Models; E7K Photos author; Gartex kit box art © 1994 Gartex; Hasegawa kit box art © 1972 Hasegawa-Minicraft Models Inc.
Posted by Straggler 脱走兵 at 10:53

Such exciting news !… I just ordered three of the four kits as I cannot control my enthusiasm :)

I also remember the previous Hasegawa versions of "Mr. Alf" and the difficulty in ever obtaining any of the elusive Gartex models.

Thanks, Nick, for solving the question about the ribbed sliding panels (I never knew exactly how they were supposed to work or what function they served) ..my remaining query is do you have any idea about the proper color for the distinctive RDF faring ?.. In your expert opinion would it be the same color as the upper surfaces of the aircraft or black as I have seen both depicted in drawings?

Gratitude to both Nick and Mirek !

Thanks. I don't know about the RDF fairing for sure but it seems darker than the upper surface paint so I'd lean towards matt black, like the similar RDF fairings on T-6 Texans (!). I don't have access to all my references just now so will come back on this detail in due course.

Indeed, it seems Matt Black color for the RDF fairing is the best bet... I will eagerly look forward to any additional information that may be forthcoming

With the release of these excellent and desirable AVI models, I can already sense an "Alf-Fest" in the near future :)

Thanks for this one, Nick - a post that appeals on many levels. A deep dive kit review! It's easy for new releases - many the very things some of us have wanted to see a long time - to slide by our notice, especially from lesser known companies. And some business models don't always feature more than one release of a particular product, so just knowing it's out there can sometimes mean the difference in readily acquiring something.

Thanks for sharing this, Mirek, I hope these do well.

Yes, good to see this kit - long overdue. This would make a nice addition to anyone's IJN float fleet. Looks to be well thought out on detail and markings. I'm going to get one. Thanks Nick for featuring this important workhorse.

Avi's cockpit interior colors recommendations are attractive. They appear to closely match the colors used by the modeler of the Hasegawa E7K1 build featured at 'Modeler's Alliance', that is referenced in Nick's blog posting.

Thanks for this in-depth review Nick. I'd seen the release, but haven't heard anything about it or any review. Now I want one. :)

I had always wondered what those panels function was thank you Nick for the explanation. I just got these kits ( all 4) and they look like a real upgrade and now we can build the radial or inline versions. How fortunate we are that we have almost all the major JNAF seaplanes now in new kits.Now wheres that new Jake and while we're at it Hasegawa how about Mavis? I know....I'm dreaming...but did we really expect/ think they'd retool a new Emily?

BTW both A+V and Choroszy made resin kits of the E7K2 along with the Gartex conversion kit. But finally an injection molded kit thank goodness for anybody whose built a resin biplane/ floatplane. Horrors!!!!!

To echo Mr.Bade and his very well-made suggestion...Hasegawa would have a real winner on their hands if they ever see fit to re-tool the venerable "Mavis"