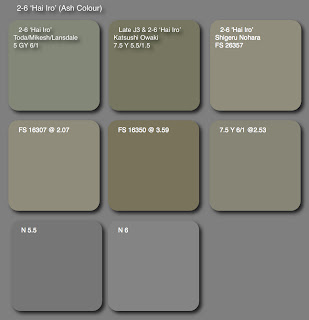 Veteran colour researcher James F Lansdale has written to me privately, gently and quite rightly taking me to task for prematurely linking the extant colours of various early Zero artifacts to the IJN paint colour 'Hai Iro' (Ash or grey colour), KariKi 117 J3 and 8609 2-6. He correctly points out that nowhere has anyone made this link in either official documents nor the official colour standards.
Jim notes that J3 was one of the colours used in the camouflage tests reported in document YoKu 0266 and was therefore unlikely to be the same as the "J3 (but ) slightly towards amber colour" also mentioned in the report as the current colour of the Zero (in February 1942). Further to this he points out that the colour of the actual 2-6 chip examined by him and other aviation luminaries is not a "warm gray-green" but a "true gray".
Jim proposes a visual Munsell match of 5 GY 6/1 for the colour chip 2-6, which is technically not a "true gray" (i.e. a neutral grey consisting of black and white pigments). Japanese aviation author Shigeru Nohara suggested a match of FS 26357 which is a more creamy grey. Jim is correct in advising me that Japanese researcher 'Summer'  put the 2-6 chip between Munsell N 5 and N 6, cool neutral greys with not a hint of green or brown. Summer also stated that the 2-6 chip was identical to the J3 chip in KariKi 117. However, upon checking Summer's original notes I found that he had actually qualified his N 5.5/N 6 match by noting that the chip had a faint yellowish colour.
5 GY 6/1 is represented  as C35-60B in the JPMA (Japanese Paint Manufacturers Association) colour deck Summer used to make the comparisons so it is puzzling why he did not match this directly to the 2-6 chip as Jim and others had. To some eyes, including my own, C35-50B/5 GY 6/1 has a decidely greenish appearance, more so when viewed adjacent to true neutral greys. This may be what Summer was getting at in his qualification of a faint yellowish colour.
For me, taking the 5 GY 6/1 match at face value, many of the extant artifact colours still look like "J3 Hai iro (but) slightly towards amber colour". Especially so if age darkening and ambering is taken into account. The question remains, however, just what was this colour? Was it a distinct but un-designated variation of J3, was it the result of a specific paint application methodology, or was it a different colour altogether? At present the questions comes down to the translated semantics of the YoKu No.0266 report. Did the author mean that the colour was merely like J3 towards amber or that it was J3 towards amber? Was there, by that time, a method of application for paint J3 that resulted in its amber appearance?
The various colours cited here are presented above, together with the J3/2-6 value assigned by Katsushi Owaki. The closest equivalent FS and Munsell matches are shown below each chip with the DE2000 difference calculation (2.0 or less = a close match). The DE2000 difference calculation between 5 GY 6/1 and 7.5 Y 5.5/1.5 is 6.19 whilst FS 26357 is @ 8.06. The difference between 5 GY 6/1 and 26357 is 4.15.
Image credit: rendered colour chips ©Straggler 2008
Posted by Straggler 脱走兵 at 00:18

Great job in this posting where you summarize the information, that has been made public to date, regarding early A6M camo color(s).