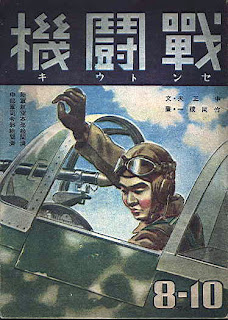 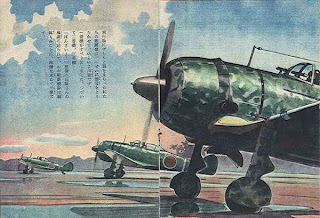 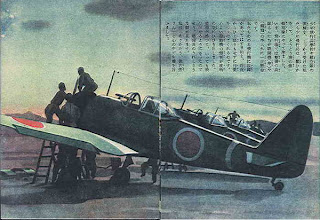 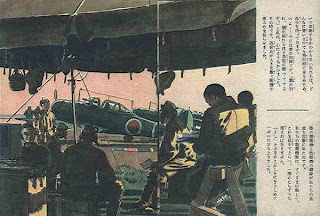 These wonderfully evocative images of the Type 2 Fighter 'Shoki' are from a wartime children's book and have been very kindly shared by Sung Sin Myung whose grandfather served as a JAAF pilot in the CBI theatre.

Sometimes translated as "Demon Queller" or "Devil Queller", Shoki is actually the Japanese name for a Chinese Taoist deity (more properly an immortal) called Chung Kuei or Zhong Kui. There are numerous myths and legends about this character and he is featured prominently in paintings, statuettes and door posters, usually as a fierce faced bearded man in the plain robes and cap of a scholar, armed with a sword.
According to one myth, in ancient times the Tang Dynasty emperor Tai Zong was plagued in his sleep by evil spirits and demons. His resolute minister Zhong Kui and a steadfast companion Hu Jing De stood guard over the emperor overnight and kept the demons away. Both characters became immortalised as door or threshold gods, their painted effigies used to protect homes and temples from evil spirits. They came to represent resolute defence against evil spirits and demons - a fitting name for the Type 2 which found success as a fast-climbing point defence interceptor.
In Japanese culture Shoki dates back to at least the Kamakura era (1185-1392).

This artwork is beautiful. Looks like watercolour but I may be wrong. I find the wartime artwork both eastern and western, very atmospheric in style.