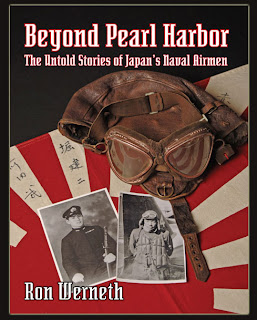 A most valuable and important English language document relating to Japanese Naval Aviation has recently been published. 'Beyond Pearl Harbor' by Ron Werneth explores the untold stories of Japan's naval airman through the medium of a series of in-depth interviews with surviving veterans.
The author decided to move to Japan in order to complete his research and this 288-page book is the fine achievement of many years of determination and hard work.
'Beyond Pearl Harbor' is an especially valuable record as the author provides interviews not just with fighter pilots but with carrier bomber, attack plane and maintenance crew too. Their fascinating first hand experiences and impressions have been captured for posterity and made available to enthusiasts and researchers in a permanent archive which penetrates beyond the Western stereotyping of Japanese airmen created by 60 years of populist writing. The interviews are accompanied by many rare and unpublished photographs from the personal albums of veterans.  There is also a colour section which, in addition to photographs of the surviving veterans,  their families and former opponents, provides profiles of the aircraft described. The Appendices include a most useful map of Japanese Navy air and seaplane bases in Japan during WWII, a glossary of Japanese terms, copious endnotes to the chapters and a comprehensive bibliography
This book is very highly recommended to everyone with an interest in Japanese naval aviation and/or the Japanese experience in the Second World War. Signed and dedicated copies of 'Beyond Pearl Harbor' may be obtained directly from Ron's website.
Posted by Straggler 脱走兵 at 10:23