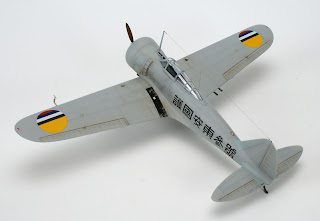 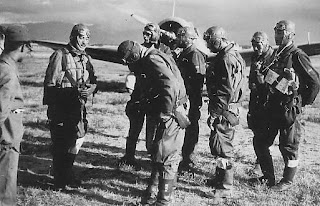 Spotted a superb build of the Hasegawa (ex-Mania) 1/48th kit of the Nakajima Type 97 Fighter (Allied Code Name "Nate") in Manchoukuo (Manchurian) Air Force markings by "Zeke" at Britmodeller using WEM Colourcoats paints (ACJ07 Navy Grey) for the blue-grey finish and adding convincing variegation with pastels and oils. Zeke has brought out the best in this venerable but excellent kit to achieve a very attractive and different looking model.
A number of 97 Sen aircraft, believed to be about 60 in total, (although some sources report only 12), were purchased from Japan and sponsored by Manchurian industrial companies (who were identified by the characters along the fuselage sides). The aircraft were presented on Manchoukuo's Aviation Day, 20th September 1942. They were used in both the fighter and fighter-trainer role by the 1st, 2nd and 3rd Air Units (Hikotai) at Hsinking, Mukden and Antung respectively and by the Air School at Manhungtun. The bottom image shows a group of Manchoukuo 97-Sen pilots - note the ethnic Russian in sunglasses.
The Manchoukuo Nates were described as "bright blue-grey" in appearance. The distinctive roundels were adopted from the Manchoukuo flag (top image), for which there are differing interpretations about the colours. Some report that these represent the five races of Manchuria whilst one explanation states the colours are representative of unification (yellow), bravery (red), justice (blue), purity (white) and determination (black).
Image credit: 'Zeke' @ Britmodeller.com © 2008
Posted by Straggler 脱走兵 at 20:05