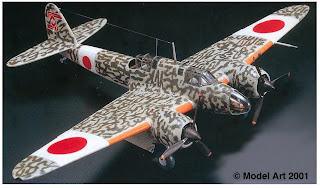 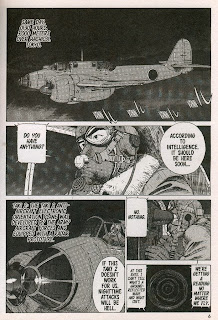 The Kawasaki Ki-45 Kai 'Toryu' "Ni Shiki Fuku-sen" (Allied Code Name 'Nick') 'Bo' ('e') version was a little known night fighter equipped with experimental air-to-air radar "dempa hyoteki" (literally "radio wave target") installed in a transparent nose.
Non-standard armament consisted of a single forward firing 40mm Ho-301 cannon in the ventral tunnel. The aircraft may also have carried twin oblique dorsal armament but this is not confirmed.
It is believed that at least 12 aircraft were converted to this configuration at the Army Air Arsenal using a variation of the Taki 2 radar set. The exact configuration and appearance of the radar equipment is not known.
AFAIK no photographs of the Kai Bo have appeared. This rare and unusual Toryu was featured as a 1/72nd conversion from the Hasegawa kit by modeller Katoh Hiroyuki in the June 2001 issue of Model Art magazine (top picture). The type also featured in the graphic novel 'Who Fighter' by Seiho Takizawa, flown by the hero of the novel Lieutenant Kitayama (second from bottom picture).
Bottom image shows the exhaust flame pattern for the Ki-45 viewed from the rear at night. This is for the earlier single exhausts rather than the multiple thrust type of the late production Kai Tei.
Image credits: Model photograph: Model Art & Katoh Hiroyuki © 2001; Profile plan: Model Art © 2001; Comic: Dark Horse Manga & Seiho Takizawa © 2004
Posted by Straggler 脱走兵 at 13:53

Usage of radar equipped Nicks was new to me. Thanks for making this posting.

To me too. Thanks for this interesting post! The conversion work on the Hasegawa 1/72 kit done by that Japanese modeller is very inspiring, despite the lack of photographic evidence. Was the line drawing also included in the same feature from Model Art?

Thanks Ken and Ruy for your comments. The line drawing is traced from Model Art # 595 'Nihon Rikukaigun Yakan Sentoki' (Japan's Army and Navy Night Fighter Aircraft), 2001 which is recommended to everyone with an interest in the subject.

The radar equipment was monitored by both the pilot and observer. Personally I think the rear seat position would have been fully enclosed with the addition of a rear fairing of the type seen on rammers and possibly screened. Also that the Taki 2 radar equipment probably required additional aerial arrays on either side of the nose or possibly on the wings. There may also have been some flame-damping arrangement on the exhausts. Colour scheme would also have more likely reflected the intended nocturnal role, no wing /fuselage bandages and an overall dark finish, perhaps dark blue which has been mooted as a possibility for 5th Sentai Toryu.

One of the most interesting aspects is the decision to equip the ventral tunnel position with the Ho-301, the 40mm caseless ammunition weapon used as wing armament on the Ki-44 Otsu. This would have required a very close approach to the target, perhaps considered easier by night.

It does provide for a most interesting speculative option for one of the 1/72nd scale (Takara/Revell or Hasegawa) and 1/48th (Nichimo or Hasegawa kits). Might look into the possibility of marketing a conversion kit!

Hmmm... Your last comment on the possibility of a conversion set (for the 1/72 or 1/48 Hasegawa kits I guess, since these are more plentiful than Takara/Revell or Nichimo) is most interesting. Please keep us posted!

Hello, a very interesting post. Seems strange the IJA chose to handicap the aircraft (considering it was experimental)with the 40mm cannon. Like your other bloggers i was surprised that up to 12 conversions were done. Yes, i agree with you the dark overall green would have more fitting for a night fighter. If the taki set was like the later german units there may not have been the need for external antennae?
Anyway, it is a good start for a conversion. Regards M. Lewis

Hi all,
A very interesting line of thought here.....my two cents if I may.
I wonder if the radar was so "vague" that a very close, direct stern attack was needed? Rather than try to position below and behind for an oblique attack.....it would have made for a more simple approach?
I am also thinking along the lines of weight saving here....I agree that a dark overall upper paint without white bands would help, but the possible gain in weight of paint may have retarded performance so much as to make an intercept moot? Not to mention flame dampeners?
All assumptions on my part...but a very interesting aircraft for sure.
Dan

I have added an exhaust pattern schematic for the Ki-45 at night from an Allied intelligence manual. Although this is the rear view, for the earlier exhausts the front view would be similar.

Please check out pages 48 & 49 of FAOW # 21 (1990) for views of the type of fairing used to enclose the rear cockpit on 5th Sentai machines. Most of the fairings seem unpainted. Note also the predominantly plain dark colouring of the aircraft. The 5th was a dedicated night fighting unit. Most sources interpret these dark colours as green or brown but there is some precedence to suggest that a very dark (indigo) blue was a possibility for Army aircraft used for night interception or interdiction. Thorpe identifies a dark blue Ki-100 from this same unit (profile # 18) and the dark blue over natural metal finish scheme as S14 (with A22 Deep Blue).

Also note the distant image of the light coloured Ki-45 in the photograph at the top of page 48 ( just under the starboard wing of the Toryu in the left foreground - you will need a good magnifying glass!). Something strangely bulbous looking about that nose?