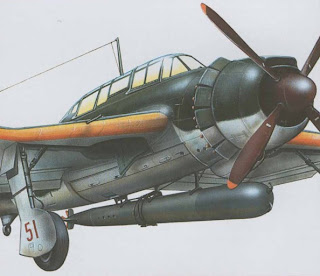 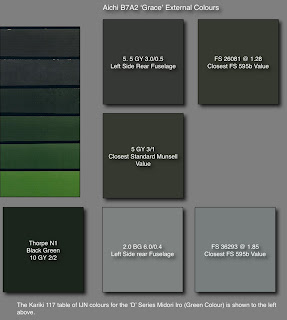 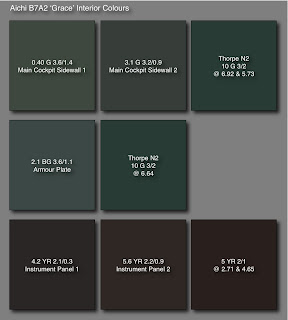 This schematic on the subject of Aichi B7A2 (Navy Carrier Attack Bomber 'Ryusei') colours was prepared in response to another private request and may also be shared here. The colours are as measured and recorded on the surviving NASM example by Robert C Mikesh and documented in his article 'Japanese Aircraft Colors at NASM' which appeared in Vol.3 No.1 of the Asahi Journal and also in the B7A2 feature of his book 'Japanese Aircraft Interiors 1940-1945' (Monogram Aviation Publications, 2000).
In Asahi Journal Mr Mikesh noted that the cockpits were "full of parts and very dirty from earlier outdoor storage" therefore no measurements were made. In his subsequent book Mr Mikesh assessed the cockpit interior as "severely weathered and oxidised" but nevertheless recorded the colorimeter measurements shown here.
The upper external surfaces appeared to be a very dark and greyish green (black green) that corresponds closely to the Kariki 117 colour standards 'D0' or 'D1' which Ryôichi Watanabe has also compared to FS 1/26081 and the Luftwaffe RLM 74 (Arawasi magazine Issue 9 Apr-Jun 2008).
The external lower surfaces are a cool, neutral grey very close to FS 36293 which is just slightly darker. Whether this surface is oxidised/chalked and would reveal a warmer "olive grey" if rubbed back is not mentioned and is unknown.
Mr Mikesh compares the main interior colour from two measurements as being close to the standard Munsell 2.5 G 3/2. In fact this is not the closest value, @ 5.91 and 5.44, but rather those are 10 GY 4/1 @ 3.99 and 5 G 3/1 @ 1.97 respectively. However, I concur that these colours may represent a faded and oxidised N2. The closest FS 595b values to the actual colour measurements are 34092 @ 3.12 and 26081 @ 3.14 respectively.
The armour plate behind the pilot's seat conforms to this general colour but again the standard Munsell value of 2.5 BG 4/2 cited by Mr Mikesh is not the closest @ 5.91 but that is rather 10 G 4/1 @ 3.62. The closest FS 595b value is 34092 @ 4.16. This is even more indicative of faded N2.
The instrument panel appears brown and measures as such in Munsell but Mr Mikesh feels that this colour is a very badly degraded N2. The dark brown colours as measured are included here but again Mr Mikesh's preferred standard Munsell value of 5 YR 2/1 is not the closest @ 2.71 & 4.65 but those are rather 7.5 YR 2/1 @ 2.49 and 5 YR 2/0.5 @ 2.71 respectively. The closest FS 595b values are 37056 @ 3.45 and 37031 @ 2.04 respectively.
Although not specifically mentioned, wheel wells and undercarriage doors on 'Ryusei' appear to have been finished in the translucent blue-green 'aotake'.
Courtesy of Mark Smith a link to an interesting 1/48th B7A2 modelling article by Milton Bell is here. This article mentions that the bulkhead between the two cockpit positions is 'aotake' as indicated by the Shigeo Koike box art. The Mikesh book photographs do not appear to show that but I believe that Mr Mikesh would have noted it if that were the case. Unfortunately we do not know the source of Mr Koike's information.
Images credit: Rendered colour chips © 2009 Straggler incorporating original Kariki 117 paint standard plates.
Posted by Straggler 脱走兵 at 13:49

Could this underside Light grey be the same one as used on Nakajima-built A6M5's?

There was talk of a underside color change on A6M5's.

Could be. They seem similar. Drop me an email and I'll send you a schematic for some documented Nakajima late undersurface greys.

Hello Nick! :)
I also interesting in schematic for some documented Nakajima late undersurface greys. :) Can I also be shared with it? :)
Kind regards,
Dmitry

Of course! Email is on the way to you.

Re Grace and modeling the type, anyone interested in the 1/48 Hasegawa B7A1 kit - or just great modeling - should check out Milton Bell's build in the files at Hyper Scale, which really shows what can be done to make a very good kit even better.

Nick very informative as usual. How about a paragraph on fractional Munsell notations? I assume they are used to intrerpolate a known color between 2 established Munsell notations?
Does Munsell supply the fractional notations as a suppliment to their book of color or are they reproduced on a computer program? Thanks! Pat Donahue

Thanks for the tip to the modelling article. I'll put a link in the post.

Thanks. Yes,the Munsell fractionals are usually generated by spectrophotometers or colorimeters (hand held colour measuring devices) and represent the precise measurement of a colour against known standard values. When the measurements are taken the illuminant must be selected but because it is seldom reported with the measurements there is still a margin of error in subsequent calculations and conversions. In most cases this is not crucial but in some colour spaces it can be. It is not a straightforward division because the values are holistic so it is actually a plotting against the XYZ axis. The fractional values are rendered and converted by Ken Glass (thank you Ken) using Munsell's own conversion software (now Ver 9.0.6) which provides sRGB and various other coordinate logarithms against different illuminants. These are then input to a colour translator and analyser programme to check them and to calculate the closest measured equivalents in other standards. Once that has been done they are rendered as 'chips' in another programme. The process is completely free of any visual and subjective comparisons by eyeball - which is the source of much of the present misinformation. One of the most confusing influences on the research so far has been the prevalence of colour opinion over colour science. I stand on the side of colour science but unfortunately I am somewhat outnumbered by opinion! ;-)

Hi, Nick, first time in this forum.
A B7A finished in 36081, or RLM74, would look very "Gunship Grey" and at odds with "conventional knowledge", even with the building article here recommended. Would you still recommend using such a colour?
Fernando, there in Haiti

Yes. A very dark, almost black green but when new probably with a slightly stronger olive chroma than the current FS equivalents.

The majority of IJN models are too light and too green, even for 1/72nd scale!

Hi, Nick,
It seems to me that commercial hobby paints depicts 36081 as a very dark "grey"... but the hint of green it may have (definite if you compare it to, say, 36118) is very faint. RLM74 is also a dark grey, and it is said that only when looked "point blank" any greenish hue was discernible. Wouldn't RLM70, a definite, dark, Black Green be more suitable for modelling purposes? A B7A is in my foreseeable future... so I want to nail it as best as can be done... one has his reputation!
Fernando, there in Haiti

I have not compared RLM 70 but for scale purposes it is probably going to give a reasonable impression. One of the issues is that even the very dark Japanese black greens had a strong green chroma in them, more intense than most hobby paints achieve - some dark greens often being rather greyish. The Japanese hobby paints for IJN colours do seem to replicate the strong green chroma better.

Humbrol's 75 Matt Bronze Green is not bad for the Japanese black green, especially if buffed to a lustre, although it still lacks a little green chroma. The green in the paint was almost iridescent, giving rise to the description "oil green", but it is very difficult to achieve this appearance on a model where most of the dark black greens look "flat".

Take a look at the photographs of the "Judy" tail fin elsewhere here to get a good impression of the appearance of this colour.

Hi, NIck,
I understand... I was actually thinking about something like 34052.
But certainly, the more I read your opinions, the more I am amazed at your recommendation of 36081, which is a grey... or RLM74, a grey whose greenish hue is reportedly almost imperceptible except at point blank range... you keep saying that the green chroma should be very strong!
Yours, Fernando

"The upper external surfaces appeared to be a very dark and greyish green (black green) that corresponds closely to the Kariki 117 colour standards 'D0' or 'D1' which Ryôichi Watanabe has also compared to FS 1/26081 and the Luftwaffe RLM 74 (Arawasi magazine Issue 9 Apr-Jun 2008)."

I have not recommended anything, only reported the closest actual FS value to the Munsell measurement of the extant paint surface and compared it to Watanabe-san's findings about the extant paint chips.

IMHO the original paint surface (and chip) probably exhibited a stronger green chroma when new, hence my recommendation of Humbrol 75. FS 34052 would also be OK - especially on a scale model, because it is the closest FS value to the standard Munsell 5 GY 3/1 which is closest to the precise measurement.

"Black green" is a good description.

Thanks, Nick... of course I understand that what I called "your recommendation" is actually your reporting of the closest value to the measurements!
But I still think that, in a visual comparison, 26081 would be far too grey. Bronze Green, on the other side, has always been recommended as a good IJN Dark Green (actually, the other way round, when searching for suitable hobby paints to mimick US a/c interiors!)
Fernando (about to sail back to Buenos Aires)

How can I get your notes on B7A2 colours?