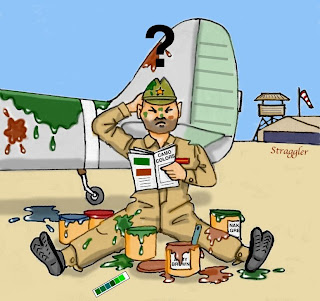 Do not be discouraged, there's a bunch of us who appreciate your efforts.

The pursuit and use of knowledge is as complicated as the colors themselves.

I'm firmly in the "I don't know, but I chose this" camp, but I am also smart enough to understand my ignorance and ask for help when I truly need it, as witness your (and others)advice when I was building my Sanger Topsy.

I have to admit, a lot of what you do is far more esoteric than my needs, but I also respect the effort it takes to seriously quantify a subject like this. I'm sure some of the people calling out the "rivet counters" and "color police" have no idea what true research is, simply using their sources as gospel without going to the source material, perpetuating common misconceptions.

"You can lead a whore to culture, but you can't make her think" is a variation on the expression, and I think it applies here.

And I do agree with your criticism of the arrogance some people display concerning their skills over others. Giving those folks their come-uppance is something to be savored, but the flip side is appreciating the work some folks have put into their "incorrect" models just because they enjoy it so much. To me, that's what the hobby is about, the cameraderie, the chance to show off a little while learning from the experts, so my next effort is that much better.

I'm sure your reasons for this pursuit are complicated as well- not just in the advancement of the hobby, but also the excitement of sharing new discoveries and the pride of a job well done.

So I for one would like you to keep on keepin' on- besides, I'm still waiting for that post on building recognition models I sent you! Again, that's a huge contrast between what is true and what the so-called experts think.

Hello Nick;
Well said, but please don't get discouraged. Objective commentary on the the historical record of 20th century Japanese military aviation is of significant value. Your presentaion of information has always been informative, amusing, and thoughtful. Please keep up the good work and thank you for all your efforts. Cheers!
- noel

Nick,
all good points and I support them.
At some point, we need to scare all of the realistic possibilities in to one corner with each supported by its respective proofs. Thereafter, we can further narrow the possibilities as better proof surfaces. I don't think this first step has been done. Give us the reasonable possibilities, availbable proofs and paint choices/mixes. The modeler then makes his choice or waits for further proof.
It appears to me that all the possibilities are being kept in play by the leading researchers and it is discouraging to me, if not many.

I'm a professional graphic designer who deals (suffers) with accurate color reproduction on a daily basis. I feel your pain. Short of sending your readers to a fine arts college to study color theory, having them attend a few physics lectures on light, and then making them work in a paint lab, or pre-flight department at a commercial printing house, I'm not sure there's a solution. Don't be discouraged - there's a few of us out there that "get it".