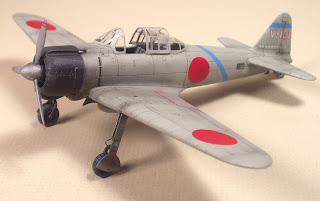 Allan Buttrick has done a magnificent job in building the veteran Airfix Zero and has very kindly agreed to let me show it here. The full build tutorial may be found at the Airfix Tribute Forum here and in it Allan raises some interesting questions about the accepted wisdom of the supposed innaccuracy of this kit by comparing it to plans. Incredible to believe, looking at his model, that it was made from a kit that is precisely 50 years old this year.
The model represents one of the aircraft flown by famous IJN ace Saburo Sakai of the Tainan Kokutai, 'V-103' and was built from the "World War II Aircraft of the Aces" Special Edition of the kit issued in 1989 (kit # 02093).
I compared the kit parts to factory blueprint plans for the production A6M2 and to 1/72nd plans drawn from these and found that the overall shape is actually quite close to the original. It was certainly a better reproduction of the Zero than the Matchbox, Revell and Frog versions. The only significant errors in outline I could discern are as follows:-
1) Tail fin and rudder are too narrow in chord, exacerbated by the fact that the Airfix fuselage is slightly too long from the rear of the canopy to the tail. The extreme tip of the rear fuselage is insufficiently cone-shaped and pointed;
2) Tailplanes are significantly underscale in span and chord
3) Rear section of canopy is overscale
4) Droptank is underscale
5) Spinner is slightly too pointed at tip
The wings are almost identical to the plans and the cowling is very close, lacking only a slight convex bulge to the sides when viewed from above (but hardly noticeable and infinitely better than the tapered monstrosities in the other three kits mentioned).
Of course the engineering and fidelity of detail cannot be compared to more recent kits, notably the revised Hasegawa offerings and the superlative Fine Molds, but the Airfix kit, for its time, is a tribute to the skill of the Airfix designers. As a result of Allan's masterpiece build, I view it in a completely new light.
Images credit: © 2009 Allan Buttrick with permission
Posted by Straggler 脱走兵 at 14:52

Thank you for posting Nick, what a wicked little bird! Nice to see such a fine effort on a vintage Airfix kit. Cheers, noel

The good news is it matches Gaston's drawings of the long-tail Nakajima Zero.

Watched the Father's day build on HS. Many of the kits I build are older versions, and it's nice to see other folks get good results too.

I never realized the Airfix kit could be built as a serious model! This model has such a great "feel" - for all our conversations about color, without that intangible "something" that Allan has achieved here, it's fairly academic.