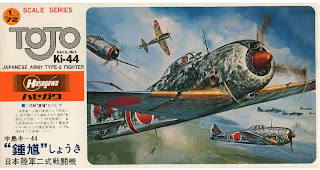 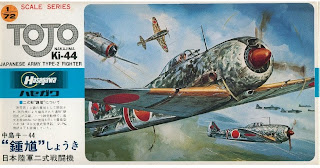 Hasegawa's veteran 1/72nd scale Ki-44 Shoki is the only kit of this type in this scale still in production and re-issued from time to time in various guises. It first appeared in 1972 as kit # A1 with its similarly long-serving stablemate the Ki-61 Hien. These two kits were so distinct in fidelity of detail and engineering approach to the contemporary Hasegawa Zero series (and other kits) that I have long suspected them to have been made from former Mania molds, perhaps kits which were in preparation but never issued under that logo before Hasegawa took over? Interestingly, whilst the Hien has a rudimentary interior, Shoki has the crude one-piece "bathtub" as used in the Zero kits - another detail that makes me think these may have been Mania kits in preparation and at different stages of completion when Hasegawa took them over.
John W Burns 'In Plastic WW2 Aircraft Kits' reports that the first issue was available from 1972 to 1980 and then re-issued from 1982-87 with the same number. The first issue box has the orange flash but for those interested in packaging trivia there are several versions. In one variant the 'A1' on the end and sides of the box has the '1' outlined in white rather than plain. In the UK the kit was imported by Hales and there are at least three versions of box with the orange flash. First there was a box identical to the 'Japanese' box but with a 'Hales' sticker attached to the box over the Japanese text on the front. Then a box with the 'Hales' logo printed on the front of the box beneath the blurb, which is in English rather than Japanese. This box is printed on matt cardboard rather than the glossy card of the original. Finally there is a flimsy, end-opening box with the box art shown on both side but otherwise identical to the second version.
The second 1982 re-issued box was identical to the first but had the flash in blue and extending like a stripe "under" the box art to appear at the right hand edge of the boxtop. There are at least two variants of this box, one with and one without the "Japan Safety Toy' panel on the side. The kits themselves were also identical except that the first issue was injected in silver plastic and the second in pale grey. The decal sheets in all these versions varied in quality and printing but offered the same options:-
1. A Ki-44-1 Later Production Model of the Akeno Air Training Division
2. A Ki-44-IIb of the 70th Sentai, black "11", flown by Yoshio Yoshida
3. A Ki-44-IIb of the 23rd Sentai
4. A Ki-44-IIa of the 246th Sentai, white "338"
Markings for the 246th Sentai aircraft shown on the box art, with red fin leading edge and white-edged red fuselage stripe, were not included in the kit. The art itself is curious, with a trio of Shoki being bounced by a P-47 whilst IJN "Betty" bombers fly in formation in the background.
The designations for the sub-types are those given by Hasegawa. The kit provided alternative oil coolers for the various versions, a copper pipe annular type and under cowling type, as well as alternative reflector (molded to the fuselage halves) and optical (telescope) type gunsights with canopies to suit. No provision was made in the kit for different armament or ammunition magazine panels. The kit contains a seated pilot with separate right arm and a standing pilot figure in the act of saluting. There is also a self-standing nameplate for the model.
The 'True Details' range of accessories provides a resin cockpit interior, resin wheels and a vacform canopy set designed for this kit, and I believe there is also an Eduard photo-etch set available for the interior.
I have seen this kit described as a "POS" on a well-known modelling forum but personally I think it is a good kit that has stood the test of time rather well. Perhaps a measure of that is that no other companies have seen fit to release a new kit of Shoki in this scale and even Hasegawa have not updated it. If the canopy and side doors are not going to be modelled open, very little of the interior can be seen, especially if the pilot is used. The overall shape captures the look and sit of the aircraft well and the surface detail is very fine, with engraved panel lines and rivets. Although shallow, the wheel wells have engraved detail and there is a full engine rather than a relief molding. The sliding part of the canopy is said to be too short and the wrong shape but to me it does not seem to detract from the overall appearance.
In a future article we'll look at the details of Shoki sub-types and also review the various subsequent re-issues of the kit. If you have built this kit in any of its forms I should be very pleased to show your pictures here.
Image credit: © 1972 & 1982 Hasegawa Seisakusho Co. Ltd., Japan
Posted by Straggler 脱走兵 at 13:25

I have very fond memories of this kit as it was my first introduction to the giddy world of Japanese-made plastic model kits. I'll never forget seeing the Shoki, among many others, in a Hasegawa catalog in a long-shuttered hobby shop in Dayton, Ohio in 1985...what a summer!
Until then, my curiosity of Japanese aircraft was, umm, satisfied by the dust-covered Monogram Zero hanging from my bedroom ceiling.

I have to agree, this little kit brings back fond memories of building models as a child and early teen. I remember searching throught the old Profile Magazines to try and find the color scheme that I would use next! Great little kit. Definitely has stood the the test of time.
Try and grab another one today!
Bobby McElroy

And it seems to be good to me. But in one of the polish modeler forums there were a rumors that this kit isn't very accurate, especially in the wing section. Du you know something about this? I've made one about 20 years ago, and it is on my shelf until now 8-) Maybe I show it to you but first of all I must bit my shame...

Hello Nick;
Great piece on the venerable Hasegawa 1/72 Shoki, a terrific little kit of an interesting subject!
I too have wondered about the relationship between the Hasegawa 1/72 Shoki / Hien and Raiden / Shiden-Kai kits and the influence and/or effect of Mania design in subsequent Hasegawa offerings.
Kind Regards,
noel

Thanks for this great article on the little Hasegawa Shoki. As in the case of other readers, it also seemed to bring nostalgic moments to like in my case, as the 1/72 Ki-44 represented a series of "firsts": 1. My first 1/72 Hasegawa build (and also my first 1/72 japanese build, excepting a very unfortunate attempt with Revell's venerable Ki-43 in 1978 or 79...). 2. I also recall that it was the first aircraft kit I tackled with engraved panel lines (this was quite a rare feature back in the early 80s). And I surely agree on its possible Mania pedigree. I also heard something on some accuracy issues (esp. regarding canopy shape and size), but till now nobody else dared to challenge this veteran kit with a new release.
This Russian chap addressed the canopy issue (and a lot of other things): http://www.dishmodels.com/gshow.htm?p=762
Kind regards,