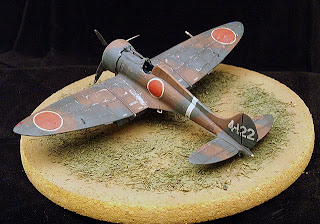 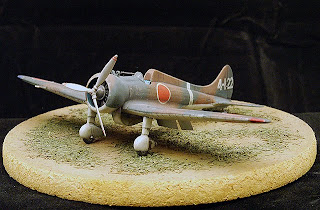 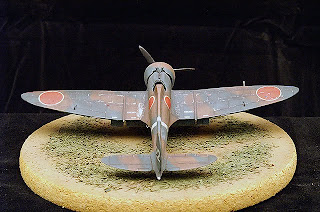 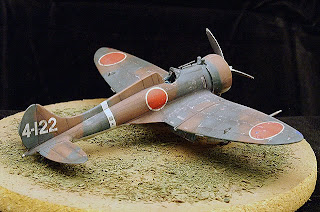 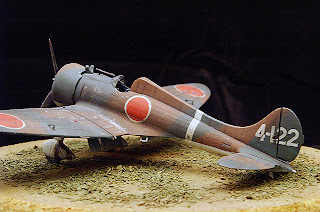 This Fujimi 1/72nd scale Mitsubishi A5M2a in Sino-Japanese War camouflage is another superbly made and painted model by Zbyszek Malicki.
The aircraft modelled by Zbyszek was flown by PO 1st Class Mitsugo Mori of the 13th Kokutai during the attack on Hankow on 18th February 1938 and is the aircraft depicted on the box art of Fujimi kit # C-19/72040 first issued in 1996. The paints used were Tamiya red-brown and Extracolor IJA Green.
Seeing this aircraft brings back fond memories of watching the Taiwanese film "Heroes of the Eastern Skies" in a cinema in Hong Kong in 1977. The A5Ms in that film were wooden models on wires, pitted against Chinese biplane Curtiss Hawk IIIs flown by the heroes of the title. That was in the days before cgi and the aerial sequences would be considered primitive now. In fact the models were quite carefully crafted and filmed above a miniature landscape of considerable charm.
Image credit: © 2009 Zbyszek Malicki
Posted by Straggler 脱走兵 at 09:26

A fine effort indeed! Thank you Nick for posting this terrific little fighter. I'm curious if the dropped flaps are a photo-etch add on, or scratch built? Either way, they add to the overall effect. No question that 1/72 is my favorite scale and workmanship of this calibre inspires me to improve on my own modest efforts. Cheers and happy aviation modeling to all!
noel

Thanks for your kind opinions. Noel..yes the flaps are photo-etch, like the cockpit stuff...

Congratulations Zbyszek! Beautiful work. It puts many members of the 1/48 crowd to shame, with such minute and convincing attention to detail and realism... Very inspiring indeed!

I recalling seeing this kit unbuilt and one thing that strikes me is just how amazingly thick the wing trailing edges are for such a petite machine in 1/72 scale. It surely detracts from general appareance of the model.

What a beautiful model! I hope Nick shows more of your work in the near future. I thought the Babs was also very fine work.