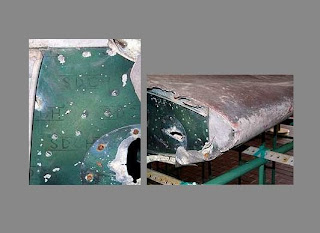 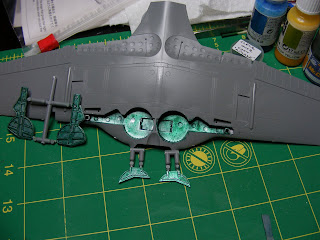 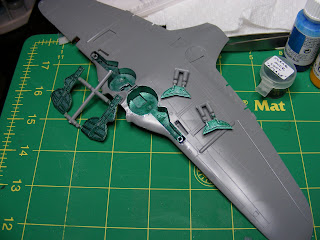 What Is It?
Following on from previous articles exploring interior colours is this brief diversion, hopefully of interest. There are several proprietory hobby paints available which purport to represent the translucent blueish-green protective coating seen on the interiors of both Army and Navy aircraft which has become well known as 'Aotake' (or aodake, 青竹). However, being essentially opaque metallic colours these paints can only create an approximate impression of the appearance and are often quite garish. Most modern translations describe Aotake as "green bamboo", the Nihon Kokugo Dai Jiten of 1972 defining it principally as "the trunk of raw, green bamboo", but the word "Ao" can be problematic in terms of meaning blue or green.
The niceties of the language were explored in depth in a superb article in the late and lamented Asahi Journal Vol.2 No.4 where two uses of the term were identified and explored, distinguishing between its use to describe a coating and its use to describe a colour. In the article Model Art 272 (Camouflage & Markings of the Imperial Japanese Navy Fighters in WWII) was reported to describe a green-yellow paint colour chip on page 109 in the following terms:-
"Ordinarily it's called aodake colour but actually it is a coating from a family of transparent zabon enamels. There are two branches to it, a blue one and a green one."
This chip is approximately similar in hue to FS 34258 but a little lighter and "metallic" in finish.
Model Art Special 329 (Camouflage & Markings of Imperial Japanese Army Fighters, 1989) went further:-
"Aodake is a crystal that dissolves in alcohol and is used in coatings when assembling steel and the like. (The aodake) used for interior colours was a transparent blue colour of zabon enamel but sometimes there were green ones too. When applied in coats it becomes an ordinary dark blue colour."
The strong dark blue pigment Prussian Blue (sRGB 0, 49, 83, very close to FS 15050 @ 1.14) was used in a similar way and was often referred to as "engineers blue". Aha, that is a rather deep, navy blue.
In Model Art Special 406 (Camouflage & Markings of Imperial Japanese Navy Bombers in WWII, 1993) the two apparent uses of the term were clarified:-
"Aodake used to be considered very similar to the zinc chromate (paint) on American and other military planes but the coatings were not of one type (only). There were Aodake Number One, Aodake Number Two and some other kinds. This light green colour of aodake was widely employed."
Many years ago Don Thorpe was adamant that the term aodake originally referred to the various opaque yellow-green interior paints. In a letter published in 1980 he stated:-
"Now, as to the transparent colors; aoitake is NOT a generic application for the bare metal primers. Aoitake was only referring to the opaque paints. The bare metal primer coating was usually applied at the point of fabrication of the sheet of metal or sub-assembly and was only intended to protect the rather rich mixture of aluminium alloy from the elements until such time as permanent coatings could be applied.
"I have mixed feelings on the subject of colors in this area, although I have encountered both blues and greens. I have also encountered samples of aircraft which had other pieces of metal attached, which when separated showed a bright blue in the previously covered area, and bright green in the previously exposed areas. One theory of this phenomenon is that when exposed to sunlight, fumes, salt air and water, etc., that the colors become fugitive and change hues. I have seen many examples of this in other Japanese aircraft so the theory is not without precedent."
This appraisal is strengthened by the impression of colour given by the term aodake shoku (green bamboo colour) to the Japanese layman, as demonstrated in the Asahi Journal article by the choice of green-yellow and green-olive hues to represent it. Thus was concluded a distinction between aodake as a coating, and aodake shoku as a colour.
In his seminal works on Japanese colours, Don Thorpe gave Munsell 2.5B 4/6 as the colour value for Navy/Army 'Translucent Blue' N16/A18, equating to sRGB 0, 108, 125 and FS 15125 @ 5.37 (so not very close - the FS value is insufficiently green in appearance). And for 'Translucent Green' as Munsell 5BG 3/6, equating to sRGB 0, 84, 82 and FS 34058 @ 10.0 (a poor match, too dark and not green enough).
In his most recent profile on the Ki-44 Shoki fighter, leading Japanese researcher and author Shigeru Nohara comments that:-
"This interior paint commonly called "Aotake" for the corrosion prevention was applied on the Ki-44 production aircraft until mid-1943. The paint was used by the Army and Navy but the name Clear Pale Blue was from the Navy. There are variations for this paint existed such as #1 and #2. Since the colour being translucent the tone after painting also depends on the repetitions of the coating."
The printed chip provided in the book is approximately similar to FS 34241.
Hobby Paints


As mentioned the aodake coating has been represented by a number of opaque metallic hobby paints. The GSI Creos (known as 'Gunze') Aqueous paint represents this coating with H63 'Metallic Blue-Green' which strongly emphasises a bright blue rather than green. The corresponding 'Mr Color' lacquer paint is C57. In Xtracolor the coating is represented by X355 'Japanese WWII Interior Blue' . Recent tins of this paint appear to be slightly lighter and more silvery than earlier examples. White Ensign Models Colourcoats paint ACJ15 'Aotake' is almost identical in appearance to the Xtracolor paint, perhaps chromatically just a little stronger. In the old AeroMaster Warbird acrylic colours was 1084 'Aotake', very similar to the GSI Creos paints. Lifecolor market an airbrush paint called "Blue Aotake" which has an advertised RGB value of 0, 144, 121 and is a very bright turquoise blue-green with no comparable Munsell or FS equivalents.
Representing Aotake
Correspondent "No Parachute" kindly contributed these images of his 1/32nd scale Hasegawa Ki-44 Shoki (above) painted using his own technique for representing this elusive finish. He begins with a base coat of Mr Color #159 'Super Silver' as "an excellent metallic color having the appearance and durability of actual metal". Then he mixes his own version of the 'green/blue' using Vallejo paints AV #70938 'Transparent Blue' and AV #70937 'Transparent Yellow' (FS 38907) to achieve the very pleasing result shown here. The finish is shown under various lighting conditions but at the time the photographs were taken was not clear coated. "No Parachute" welcomes comments on this finish - as do I.
To be continued . . .
Image credits: ©2010 "No Parachute"; Relics courtesy of Mr. Honma Hiroshi, Hokkaido Museum of Climate, Kutchan.
Posted by Straggler 脱走兵 at 14:04

interesting article. The painting procedure for creating "Aotake" is not a bad idea. However, personally I will use #29 or #7 on my Ki-44´s. Probably leave the wheel wells in "natural aluminium". I´m not saying it´s correct but it´s my choice. What about Ki-46 interior colours? Could it have been #7? Keep up the good work Nick! Best regards from Stefan

Nick,
A wonderful and informative post that leaves me feeling much more informed than before on the topic. Thanks as always....
Dan

Thanks for making another fine and informative posting Nick.

In reply to Stefan's inquiry regarding Ki.46 interior colors, the wheel wells of the Ki.46-III, now long on public display in England, were at one time mostly natural metal with bits and pieces here and there finished in what appears in photos to be some sort of a brown primer. The tail wheel strut and access foot step were also painted similarly, in what appears to be a 'Rust-o-leum' brown color. I can't be too certain about the appearance of the brown color, as my prints were made from old Kodak color negative film. It is my understanding that Kodak color films were biased towards brown hues and against green hues.

Whether the detail parts of the Ki.46-III were original IJA or factory applied colors, I can't say. The photo scans I have date from the mid 1980s, at least one restoration effort before the plane's current repaint job.

I am sure Stefan is more interested in the interior colors of the Ki.46 cockpits. The mid 1980s photos available to me show its cockpit interior had been repainted in what I have seen described as RAF interior green. I am not sure if the cockpits were repainted during the most recent restoration work on the exhibit. I would be surprised if the Ki.46-III cockpit factory paint job differed very much from the opaque yellow-green that is commonly termed Mitsubishi interior color in several hobby paint ranges now available.

Thanks a million for the info, Ken.
My Ki-46 is still in the "to-do-pile" so I have some time before a final decision. Back to "Aotake".
The painting technique described in the post is something I have tried myself. Or better, I made som experiments on scrap plastic. Transparent hobby paints are, as you probably know, available from several manufactures but I also tested "Water Mixable Oil Colour" from Winsor & Newton. Several of their paints are transparent and if used over a silver/aluminium base it does not look bad at all.

Another interesting note concerning "Aotake" - type of paints is something I have seen on spareparts for commercial vehicles. More specific: brake drums for trucks & trailers. On a truck or trailer brake drums are made of cast iron and the inside and the wheel flange is machined. On many occasions I´ve seen the machined surfaces being coated with a transparent "paint", probably to prevent corrosion. The colour of this coating could be red, blue or green.