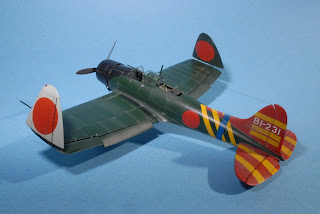 Back in December 2008 (was it really that long ago?) I waxed lyrical about the veteran Airfix 'Val' of 1964 and included a link to a much improved example built by John Wong of Toronto, Canada. Now John has very kindly sent some more photographs of this superb build (click on the images for the full-size versions). It's hard to believe that the Airfix 'Val' lurks under that stunning model but the result is a tribute both to the honesty of Airfix's basic kit and John's superlative modelling skills. 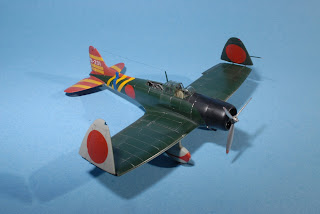 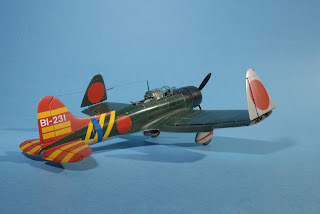 John also sent images of a Zero carrier shadowbox, created using the Jo-Han Zero kit of 1973. This was, I believe, based on the LS kit and included optional parts to build the floatplane 'Rufe'. John comments that the wingspan of the kit is too short for the A6M2 but that this proved to be an advantage in the limited space available. The shadowbox was built into a photo storage box that he had found in a camera store in Toronto. 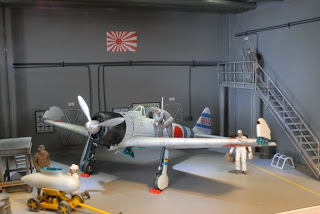 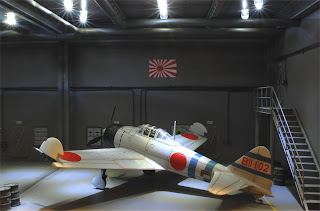 Thanks to John for sharing his photos of these excellent models.

Very nice!
Just goes to show how far you can go in 1/72 scale. Thank you for posting.

Wow! I had seen some photos of this model a while back and seeing these that have been posted here, am astonished all over again.

I never tried harder on a model to less effect than when I tried to build the Airfix Val. I chopped the wings to fold them, began a cockpit, vacformed the canopies, started fixing the landing gear spats; grand plans. But the more research I collected...the more there was that needed alteration. I finally gave up it up as a bad job. John's model sure belies that judgement, and I'll bet even he has forgotten some of the changes required for it to end up such a faithful replica. It's like taking Margaret Thatcher to a movie and when the houselights come up...you're sitting next to Nicole Kidman.

Thanks for sharing your masterpieces, John - that Zero is beautiful too! And thanks Nick, for featuring these and the recent string of so many good models from all over the world - the Lily, the trainer Zero, and all the others.

Very impressive, and my highest compliments. I love the hangar bay diorama as well.