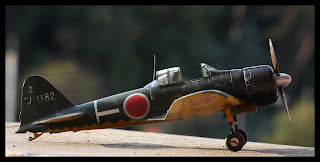 Francesco corrected the machine-gun cowling panel (which is the wrong shape), modified the combination engine-cowling-propeller assembly, because the latter was designed in a way which renders it too prominent from the engine cowling. He also modified the landing gear, cutting the wheel covers and adding brake lines, and added the undercarriage down indicator bars on top of the wings 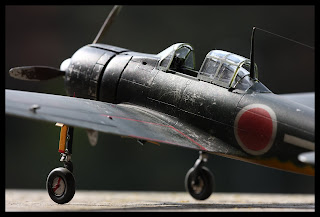 Eduard Photo-Etch was used for the cockpit. But the most impressive detail is that there are no decals anywhere on the model. All the markings, maintenance stencils, etc., were painted free hand - and Francesco reports that the name plate was a nightmare... 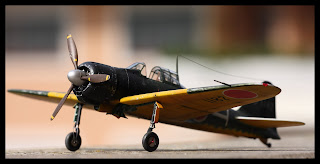 The entire aircraft was sprayed overall with Tamiya Bare Metal from a can, then the undersides were painted with a match to C2 tou-ou-shoku, mixing Tamiya XF-4 Yellow Green and X-6 Orange. The cowling and anti glare panel were painted with a mix of XF-1 Black and X-4 Blue. The so called upper surface "Nakajima green D1" is Tamiya XF-11, lightened a bit. Propeller color is XF-64 + XF-1 with a ratio of 2:1 and identification bands was painted with Gunze H-24. Note also the superb rendering of 'aotake' on the wheel wells and undercarriage doors. 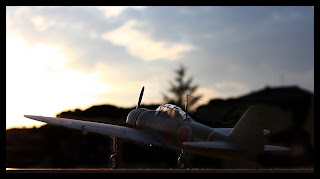 Finally Francesco scratched the completed paint with sandpaper, steelwool, a toothpick and surgery knife, and after that weathered the model with oil paints, linseed oil and pastels. He also added a red primer-like shade with pastels, because at that time Zeros were still primed. 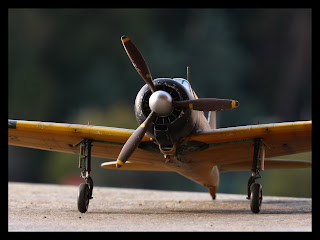 Simply wonderful. Thank you, Francesco for kindly sharing the images here.
All images: ©2010 Francesco Borraccino
Posted by Straggler 脱走兵 at 17:57

Great job on your build, Francesco.

Francesco,
This is one of my favorite "odd ball" Zeros because of the colors and the role it served- a wonderful job on the model. Thanks for sharing it with us!
Dan