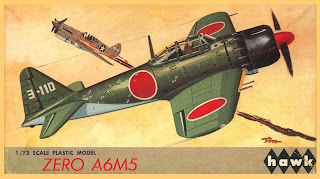 How time flys. It is two years since declaring an intention to take a closer look at the Hawk A6M5 Zero when blogging about Revell's Zero back in April 2008!  The simple Hawk kit was first issued in 1967 as # 8-29 and, appearing after the Airfix, Frog and Revell efforts, the simplicity and very basic nature of the kit is surprising. No undercarriage - it can only be built in flying attitude - absolutely no interior, not even a pilot, although unlike the Frog Zero it does include the rear cockpit decking and rollover pylon and there are only 11 parts, including the two part display stand! But I rather like the chunky simplicity and generally honest shapes of the Hawk kits - a good antidote to AMS! 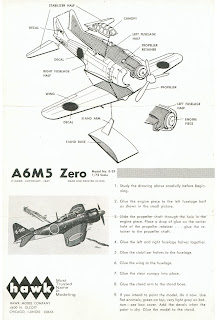 The image below shows the front and rear of the end-opening box for the Testors 1978 re-issue. The kit is unchanged apart from being molded in a good quality grey plastic. Decals were by Microscale but nevertheless out of register on my example. 'Yo-147' was again the only markings option. The instruction sheet in this version was new and gave detailed hints and tips, including how to weather the model! 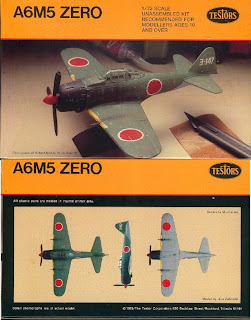 As recently as 2003 the Hawk Zero was resurrected by Testors in its 'Easy Builder' range with a different box and somewhat improved decals. Both examples of box art depict the twin wing guns of the A6M5c but in fact the model only has the single wing guns of the A6M5a & b. These are molded integrally with the one-piece wing and are frequently broken off in the box. Note how the '5' suffix has been dropped from the model designation and replaced with just 'A6M'. 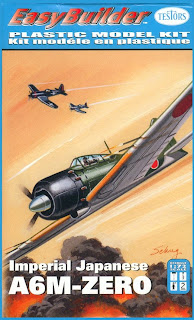 I built one of these kits whilst on leave in the UK in the late seventies, but seem to think I hauled it out of a stash rather than buying it at that time. I painted it with Humbrol's IJN Green from their "Authentics" range - about which more anon (and hopefully not two years hence!) - and decalled it using the "Microscale system" as was, with their very dark, brownish Hinomaru and tail codes for the 254th Ku made up from a Letraset sheet of approximately correctly sized and styled font.  The lack of interior was disguised with black paint and a levitating Revell pilot, the neat oxygen masked one from the Hayate and Wildcat kits. It was an early venture into "serious modelling" and I still have it, although when I dug it out recently to examine it did not seem nearly so good a model as I remembered it being!
The markings in the various kits appear unchanged, with 'Yo-110' shown on the Tom Morgan box art but 'Yo-147' included on the decal sheet! The parts are neatly molded with a rash of fine raised rivet and panel detail all over them. The cowling is molded integrally with the fuselage sides with simplified exhause stacks and there is no engine, just a "stopper" to retain the prop. The canopy is crystal clear with sharply defined frames and the overall appearance of the kit as an A6M5a is reasonable and certainly better than some of its predecessors, spoiled only by the poorly shaped spinner. There was no drop tank in the kit - a pity as this was a characteristic feature of comic book Zero iconography.
Incidentally, for those into retro or nostalgia modelling I came across a nice build article on the old Airfix Zero at this Venezuelan website.

Hello Nick;
Thank you for posting this neat little review.

I'ts amusing to look back and reflect on what was avilable in the early to mid 1970's to a modeling enthusiast interested in WW II Japanese service aviation.

Now if only Hasegawa or some other firm would see fit to issue a resonablely accurate Type 97 SALLY in 1/72 scale! Ah, well...