Regarding the interior colour of the N1K1 "Rex" floatplane fighter Rober C Mikesh writes in 'Japanese Aircraft Interiors 1940-1945' (Monogram Aviation Publications, 2000):-
"It was not practical to make a definitive description of the interior green that was found on the two Rex aircraft that were inspected. The aircraft at the Admiral Nimitz Museum has been repainted from the original, and the paint on the aircraft at the National Air and Space Museum (NASM) is so deteriorated that an accurate assessment is not possible under the existing conditions. It is safe to say, however, that the colour appearance appears to approximate the generally used Munsell 2.5 GY 4/2 found in Navy cockpits. This approximates the Pantone 5743U and is shown on page 15 as Color N.33. The instrument panel of the Admiral Nimitz Museum example, and the one separated panel at the NASM, are both semi-gloss black."
Is it safe to assume that this colour continued to be used in the cockpits of the N1K1-J Shiden? 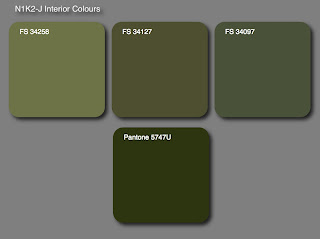 In respect of the N1K2-J  the interior colour match cited by Peter Fearis in his excellent monograph on the type self-published under the 'Kaburaya' title in 2000 (Kaburaya Books Modellers Guide Number One: Kawanishi N1K2-J Shiden Kai "George") is FS 34258. The evidence for Peter's conclusion about the colour is not revealed in the book but he had extensively examined and photographed the extant US Air Force Museum example, airframe # 5312.
However, Robert C Mikesh, in examining # 5312 concluded that:-
"no repainting of the interior had previously been made, therefore original. although aged, colors could be examined in the very few areas where deterioration was not too great".
And that this color:-
"closely resembled A/N 34, as had the NASM aircraft".
Mikesh also matched FS 34127 and A/N 34 (from the color identification system used in his book) to "the better preserved color of the interior structure, behind components that were removed" inside the cockpit of the extant NASM example airframe # 5341.
Mikesh matched the colour of those components (as distinct from the structure) that could be studied as ranging in colour appearance from Pantone 5747U (FS34097) "slightly greener than the color of the structure" to N1. "Most ranged between N1, which was too dark, to N2, which was too yellow". All were described as shades of green but the "mix of very similar colors in a cockpit is barely noticeable, resulting in a strong resemblance to the NASM aircraft".
Elsewhere Mikesh identifies A/N 34 as Munsell 10 Y 4/4 which is exactly the same value assigned to N5 Light Olive Green by Donald W Thorpe. The closest FS value to this colour is 34151 @ 2.15 rather than 34127. It is puzzling therefore why Mr Mikesh felt it necessary to create a new designation for N5 as A/N 34 and why FS 34127 is given in comparison to it rather than 34151. The difference between the observations recorded by Fearis and Mikesh may be nothing more than the subjective perception and interpretation of the colours and fan decks in different illuminant conditions or reflect the matching to specific points on variegated surfaces. 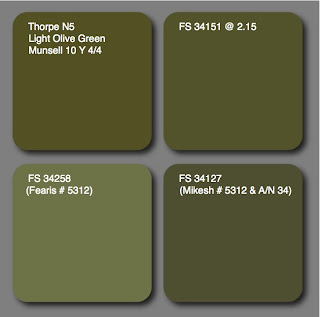 The reference to different colour standards in 'Japanese Aircraft Interiors' - by verbal description (sometimes inconsistent), Pantone, FS and the Thorpe A/N system extended in the book (with printed colour chips) introduces unnecessary complexity to an already complex subject. In the book the printed colour chip for A/N34 is actually closer in appearance to 34258 than 34127. I can only show these various colours in juxtaposition here to let readers make their own minds up.
In his earlier 'Japanese Cockpit Interiors' (Monogram Close-Up 14 & 15, 1976) Mikesh identified the same three basic Navy cockpit interior colours as recorded by Thorpe. They are shown here for completeness. It is possible that N5 and N6 represent variants or faded examples of the same basic colour. Note that none of these colours is the same as that later identified Mikesh as another colour said to be "generally used" in Navy cockpits Munsell 2.5 GY 4/2 and N.33 (and also compared to Pantone 5743U) and in the case of "Rex" specifically cited. 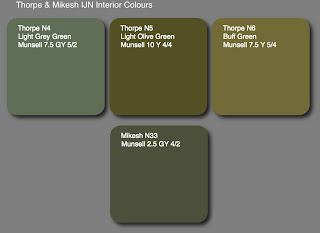 I am unable to resolve these difficulties but can only report them and display the colours referred to. Further confusion arises from some earlier photography (and memories!) showing what appears to be a completely different colour inside the cockpit of # 5341 but an explanation is provided by Mr Mikesh:-
"Kawanishi Shiden-kai 5341: This airplane belongs to the National Air and Space Museum and was restored in 1994 by the Champlin Fighter Museum. Unfortunately, this airplane had been over-sprayed with green zinc chromate during one of its many cosmetic repaintings. This made it difficult to detect minor variations in the paint colors that may originally have been used. The better preserved color of the interior structure, behind components that were removed, approximated Federal Standard 34127 and A/N 34. Components that would have been sub-units and installed after this initial painting showed slight variations to the basic color. Where possible, these components were merely cleaned and waxed in order to preserve this original paint. These differences in colors are scarcely apparent in the general appearance of the cockpit."
Color photographs in 'Japanese Aircraft Interiors' show the Shiden-kai cockpit fully restored and fully re-painted in colors matched to the originals identified by Mr Mikesh.
Mr Mikesh also examined this aircraft whilst conducting colorimeter measurements on other Japanese aircraft in the NASM collection, reporting the results in Asahi Journal Vol.3 No.1 and also suggesting a general cockpit interior color again matched to FS 34127 :-
"The Kawanishi Aircraft Company delivered this George 21 to the IJN in the closing months of the war. This was a late production Shiden Kai with serial number 5341. When received by NASM it had been outdoors at Willow Grove NAS for many years, in poor condition, and void of its original exterior paint. Under NASM direction, the Champlin Fighter Museum undertook its total restoration which was completed in November 1994. Traces of green paint that were found verified that its original color was N1. The interior had sufficient traces of original paint that a match could be made. Many cockpit components of similar greens have been retained with their original paint with a protective wax coating. All finishes used were semigloss."
It seems reasonable to conclude from this that the Shiden-kai cockpit interior, even late in the war, was painted rather than unpainted.
Image credits: Rendered colour chips © 2010 Straggler
Posted by Straggler 脱走兵 at 12:28

Good exposition, as always. Thanks for taking the time to put it all together.

I believe there is a typo in the statement below. Perhaps the 2nd 'Thorpe' color cited should be N6.

"It is possible that N5 and N5 represent variants or faded examples of the same basic colour."