Further to the blog post about the Kecay book on Japanese Aircraft in Foreign Service here, correspondent Jacob Terlouw provided some corrections about the AURI (Indonesian) aircraft and very kindly sent these images to illustrate them. His remarks are as follows:-


"Indonesia had a lot more planes painted in AURI colors than airworthy condition, and the AURI had no pilots that could fly floatplanes. At Surabaya there were at least 10-12 floatplanes painted in AURI colors. The 3-view of the Lily (Ki-48) on page 103 seems not correct. It looks as if must be the P.D.II (Pangeran = Prince Diponegoro 2) A Helen (Ki-49) was the P.D.1 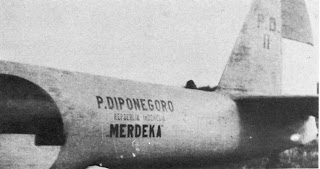 The Dutch used in fact more planes than mentioned in the book At least three Topsy's (Ki-57), three Hickory's (Ki-54) one Willow (K5Y1), one Sally (Ki-21), and occasionally a Tabby (L2D3) and an Oscar (Ki-43). The Mavis found at Surabaja never flew for the Kon Marine and I was pretty surprised to read about an Ohka."

Image credits: All 'Cockpit' magazine via Jacob Terlouw
Posted by Straggler 脱走兵 at 09:18

Thanks, Jacob & Nick, for posting the info above.

Very cool, these are new to me!!