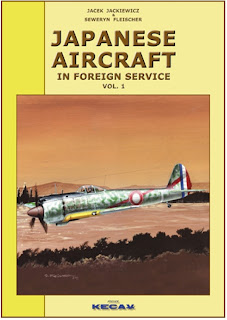 North Korean Hayabusa anyone? Perhaps a Soviet Dinah?  Or how about a French Sonia or Ida? Something of another surprise appearance is this new book from Kecay on the subject of Japanese Aircraft in Foreign Service by Jacek Jackiewicz and Seweryn Fleischer. I haven't provided a link to the publishers own website as I am getting a malware warning there (!) but the book is also advertised and featured here. This is the first volume of three related books, with Volume 2 to cover Japanese aircraft flown by the Allies and Volume 3 to cover foreign aircraft imported or captured and flown by the Japanese. Kecay seem to specialise in books on captured aircraft in foreign service with previous volumes on the Me 109 and Fw 190 in war trophy plumage. 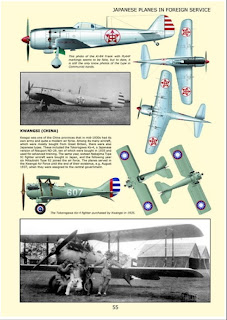 The book is in softcover format with 128 pages containing over 300 photos (a few in colour) and 187 profiles all in colour. The book is organised by nation with an English text introduction for each category. The appeal is obvious as the current internet and magazine image overload in the modelling world prompts many modellers to seek unusual or different schemes for their projects. As far as I can see the majority of the profiles are supported by photographs, including some rare and unusual examples, although the results are by necessity interpretative when it comes to their colours. The photographs are all unattributed and somewhat "soft" in reproduction, but some are taken from film stills.
The nations covered are:- 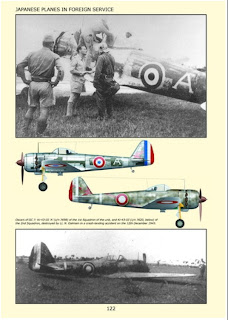 Japanese aircraft modellers will find plenty of surprises and inspiration within these sections but whether decal manufacturers will be inspired remains to be seen. Some of the subjects are already available in sets from various decal manufacturers or included within kits. New to me was the photograph of the Ki-84 Hayate in Red Army of China Air Force markings although the authors seem to think it is a fake.

Update: It is bogus! Thanks to Jim Lansdale for providing the evidence of the original image. The background of the image was not altered. 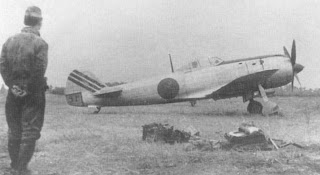 Hi Nick,
Great stuff, indeed! Something about the Hayate image makes it look like a supplemental prototype airframe, namely the rudder shape. Maybe it's just my eyes and the image, but if so, I would be doubtful as well.

Thanks for posting this, looks like a great volume for any library.
Dan

Hi Nick,
I've taken a look at the Karaya site, and although I have not seen one unknown picture, it looks promising and
ordered a copy. Can't wait for the next two volumes!

Thanks Dan! I'll have to take a closer look!

Hi Jacob, there are a few in the book which were new to me and one a partner to which will appear in Ki-27 Aces together with a bit more detail about the circumstances of its capture!

Hi Nick,
And that bird is a supplemental prototype, too! Proof positive I need to get a life as I spend way too much time on the topic ;-)
Dan

Thanks for being back on the blog! It 's truly irriplacable. Thanks to you and your comment on it I bought this book andI received my copy about a week ago. Overall-it's certainly worth buying.Any effort like this is most welcome.
But, I do have some remarks on the Indonesian and Dutch chapters.
Indonesia: A fact is they had a lot more planes painted in AURI colors than airworthy condition, and the AURI had no pilots that could fly floatplanes.At Surabaya there were at least10-12 floatplanes painted in AURI colors.

The 3-view of the Lily on page 103 seems not correct.
It looks as if must be the P.D.II (Pangeran=Prince Diponegoro 2) A Helen was the P.D.1

The Dutch used in fact more planes than mentioned in the book
At least three Topsy's,three Hickory's one Willow, one Sally,and occasionally a Tabby and an Oscar.
The Mavis found at Surabaja never flew for the Kon Marine and I was pretty surprised to read about an Ohka.
I look forward to the two other Volumes to come!

Can anyone give a preview and describe the North and South Korean aircraft depicted in the book? Do they provide color profiles of Korean aircraft? So far, I have seen photographs of Ki-55, Ki-54, Ki-9, and Ki-86 in Korean colors. I have heard rumors of Ki-43's, Ki-57's and Ki-67's in N.Korean service, although no proof.

Does anyone know if South or North Korean aircraft are depicted? Thanks.

The book deals with Korea as a single entity.

There are six photographs of the Ki-9 "Spruce" in South Korean markings, three of them in colour. There are colour profiles of three, two with top and bottom views.

There is a colour photo of a Ki-54 in North Korean markings with a colour three-view of the same aircraft (starboard profile, top and bottom).

There is a colour photo of a Ki-55 Ida with a profile in North Korean markings.

There is a colour profile of a Ki-43-II in North Korean markings said to be reconstructed from the memoirs of Soviet mechanics.

Finally there is a monochrome photo of a Tachikawa KKY-2 light ambulance aircraft in North Korean markings.

There are also a few paragraphs of text.

I know I'm really late to the party, but can anyone tell me if they still plan on releasing the next two books?
I cant seem to find anything updated info for this publisher.
also great site!

Thanks for your kind comment. I haven't heard anything more about the announced follow-on volumes but I'll have a scout round and if I find anything I'll post an update.