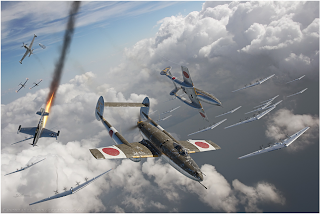 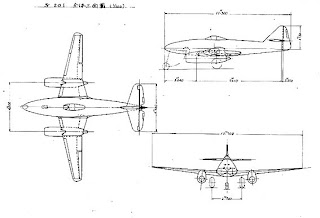 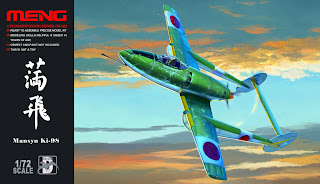 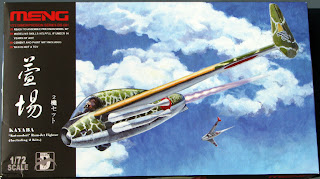 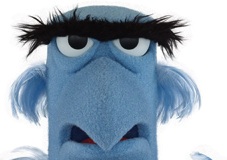 Very interesting analysis, Nick! And thank you for making me smile with the Muppet Show eagle comment and pic :)

Fascinating as always. I'd just like to say how much I enjoy your blog, how extremely well done it is. I see on j-aircraft where the future of the blog is in some doubt...I'd miss it a lot. The few times recently it's been inaccessible have been so disappointing, wondering if all this amazing information was suddenly out of reach. Here's hoping you'll decide it's worth all the work to keep it going!! Thank you

Japan 46 is an extremely interesting subject for modeling, but I totally agree that it needs to be approached with the full understanding of the history of IJAAf and IJNAF camouflage evolution up to 1945. We don't see many Me-509 or Ta-183 models from Luft'46 finished in RLM70/71/65 for instance.

Also it would be very interesting to read your comments on the camo schemes in Fine Molds' A7M2 and Ki-61-II "Flying over Tokyo 1946" combo kit release.

Nick, I had no idea your blog might cease to continue. I hope this doesn't happen as it's my favourite blog being both educational and inspirational. Warm regards, AJay

Nick, I'm honoured you bring up my Ki-98 again. Glad you like it!

I must say I quite like Meng's Katuodori. The angle is very attractive for this machine. But what confuses me is the cone in the air intake, á la Jume 004! Firstly it was a ramjet and secondly and more importantly: what happened to the pilot's legs?

I found this a particularly tricky issue to solve when I modelled my Katsuodori in 3D
(see: http://digitalaviationart.com/skyraider3d/jsp_3d_art_3.htm)

A prone position seemed most probable to me, but unlikely historically perhaps (were there any Japanese prone pilot planes?). In the end I went for a split air intake, a bit like a MiG-15. There is no evidence for this from any drawings and this arrangement doesn't leave an awful lot of space for rudder pedals, but at least it will just about fit a pilot... as long as he's not much taller than 1m70!

To be honest I am still not entirely sure how a pilot would fit in this plane. But it's an attractive little design for sure!

These 'Kikka' kits are available at my local store, but I haven't seen any reviews regarding the quality of the kits themselves. Has anyone else?

I've received mine recently. Mixed feelings, I should say. Thin and uniform engraved lines, passable surface detail, little flash (for a short run), injected and rather thin canopy are all on a plus side. Lack of cockpit and wheel well detail (especially the front one), injection stubs on the wings' insides (and other parts) and badly cast and deformed main wheels are on a downside. Overall quality is inferior to other recent AZ Models kits, such as Spit Mk.VIII/IX and it seems that their Kikka is based on the reworked molds of the older Pavla kit. But hey, there is no other readily available alternative in the divine scale, and even this one is short run...

P.S. I haven't checked the accuracy of the kit yet. The best available scale plans are those of Matsuba Minoru, but I have to downscale them to 72.

Comparing a model kit against scale drawings makes very little sense, unless you can confirm the drawings are accurate to start with. Sadly the vast majority of "scale" drawings isn't accurate at all. Matsuba Minoru's drawings usually look very impressive, but he too makes mistakes and some of his work is really poor (I-16 Type 10 drawing, for instance). But in terms of accuracy I'd choose his drawings any day over those by Shigeru Nohara!

You are right, any scale drawing is only as good as:

1. the quality of reference material available and;
2. professionalism of a draftsman

Living in Japan, I guess Mr. Minoru had much better chance of access to original reference material on Japanese types than, say, Paul Matt would've had. Draftsmanship of Mr. Matsuba IMHO is also out of question.

For me that makes his scale drawings of Japanese aircraft the first (and sometimes the only) source to check the accuracy of model kits. The second are photos, of course.

P.S. For I-16 and other VVS types I would refer to Soviet and contemporary Russian authors like Gordyukov, Maslov or Jurgenson.