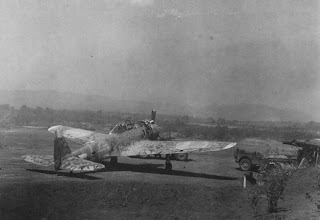 This Ki-43-II Oscar of the 204th Hiko Sentai photographed at Lashio, Burma in March 1945 appears to display the "old" form of marking for that unit when it was the Kyôdô ('Teaching') Hiko Dai 204 Sentai - an arrow "flight" on the rear fuselage behind the Hinomaru. This was said to be inspired by a historical warrior Chinzei Hachiro whose name evoked the location where the unit was first formed in April 1942 at Chinzei in Manchuria. The wingtips and top section of the tail fin (and perhaps rudder) appear to be painted white. The form of the mottle and typical paint wear is also usefully shown in this view for anyone contemplating an(other) Oscar model.

After the change of designation the unit insignia became a "flash" on the leading edge of the fin with small "wings" extending onto the inboard forward edges of the tailplane in the Chutai colours, said to represent the flight of the crane. The 204th were active over Burma as an Oscar fighter unit from November 1943 to October 1944 when they moved to the Philippines to counter US forces landing there. After withdrawing to Japan in December 1944 they supposedly re-equipped with the Ki-43-III Ko and then re-deployed to Saigon in French Indo-China in February 1945. As part of the secret 'Kaku manouevres' to increase air defence in Japan the 204th was to be shifted to Formosa (Taiwan) as part of the 25th Independent Air Brigade at the end of June 1945, together with the other elements of the Brigade - the 13th fighter, 50th fighter, 8th light bomber and 58th heavy bomber Sentai. Part of the unit moved to Formosa in March 1945 and was re-designated Makoto (誠 - sincerity, fidelity) 204th Hiko Sentai to participate in Tokubetsu kôgeki - tokkôtai - 'special attack' suicide operations against Allied naval forces.

A wonderful photo and new at least to these eyes. Thanks. Do you know the significance of the white wing and tail tips? For an interesting example of the later 204th marking you mention, the old, old profile on the Ki-43 (pink & white cover) has a great photo of one downed, if I remember the caption correctly, during the Imphal - Kohima campaign. This was also a colorful bird. I never knew that its origin might have been associated with the flight of the crane, but it was a graceful design.

Hello Nick; An interesting photo, thank you for posting it. Attempting to replicate this mottle pattern in 1/72 would be a challenge indeed. I think I'll stick to a solid upper surface finish for now!
Cheers, noel

Thanks Mark and Noel

Mark, I don't know the reason for the white wingtips and tail fin - perhaps an integral part of the unit markings not previously realised (as with the 104th Sentai wingtips and 1st Sentai painted elevators)? Thanks for the mention of the other photo - I think I know which one you mean.

Noel, sometimes in 1/72nd scale a very fine brush is better for intricate mottle than an airbrush. If you work very patiently, completing a section at a time, you can use thinner to slightly blur the edges of each blotch or squiggle. You need to use a barrier layer over the natural metal or a dissimilar medium (oil over acrylic or vice versa) to prevent the thinning technique lifting the underlying surface. Once the mottle is complete areas of wear can be introduced by very gentle abrasion.

Noel,
In reference to what Nick said. If you invest in very fine wet/dry sanding cloths, like 1000 to 5000 grit (automotive quality),after the mottled paint has cured, with very careful wet sanding you can make the dark color appear very worn in specific areas. Hope this helps,
Dan

Thank you for posting this photo. It would make an interesting scheme for a model. Any thoughts on the rather "pale" national markings? Overpainted perhaps?

The bright-coloured wing and fin tips are very interesting as well as the fuselage markings. But also note the enormous wing hinomaru! They're definitely oversized and moved more inwards compared to the standard paint scheme for Hayabusas. Could this be related to the training role (to enhance visibility in the air without sacrificing camouflage)?

Thank you for posting this photo. It would make an interesting scheme for a model. Any thoughts about the "washed out" national markings? Overpainted perhaps?

Thank You Nick and Dan for your suggestions on how to do a mottle finish. It's something I will experiment with. Cheers, noel

Thanks for the photo and unit history, Nick.