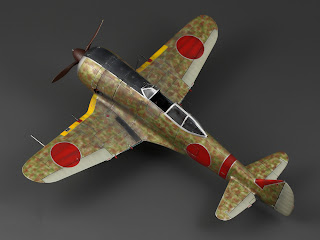 Here is the continuation and completion of Aleksei's description and photographs of his superlative Hasegawa Ki-44 build. 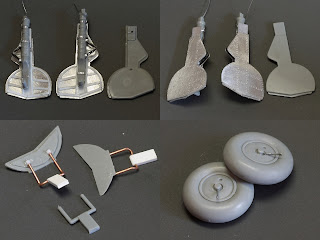 Landing gear doors, struts and wheels
"The insides of the landing gear doors supplied in the kit are more appropriate for the later marks of Ki-44-II since they lack the ribbing. The original parts were rather thick, so I scratchbuilt the new ones from sheet aluminum. The process was as follows: 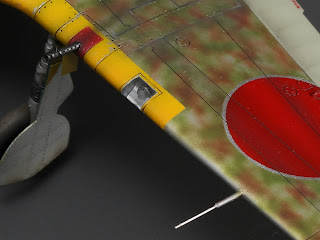 "After the fuselage halves and wings were glued together I slightly detailed the tail wheel well (anyway not much will be seen through the closely fit doors). Tail wheel doors were scratchbuilt similarly to the landing gear doors, i.e. cut from aluminum and detailed with plastic. Tail wheel fork details were deepened with a blade. 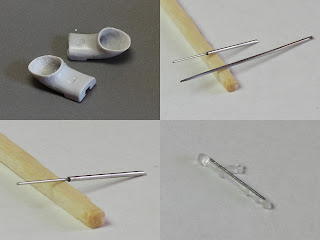 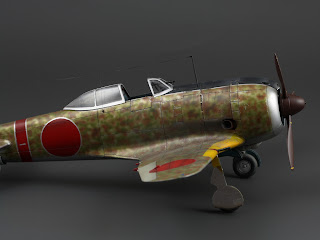 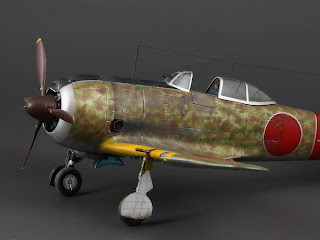 "Canopy fit to the fuselage is below average so a lot of trimming was required. It was sanded, front part was glued in and seams filled with superglue. Silicon molds were formed on the leading edge lights in order to make copies from transparent epoxy with some color paint added. Oil radiator housing was modified (plastic walls thinned to scale, grills added). Model was riveted on top of the primer coat. 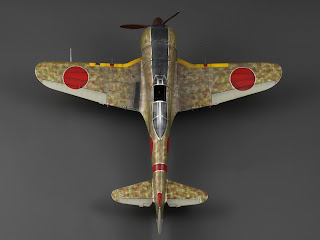 Painting and weathering
"Except for stencilling on the control surfaces few of the kit decals were used. Himomaru, stripes and various fuselage elements as well as control surfaces were airbrushed with proper colors and masked off. The following paints were used: 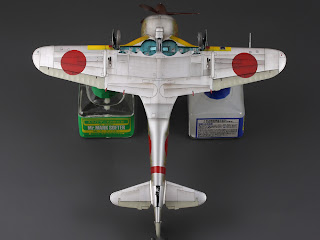 "Wheel wells were first painted aluminum; square masks were placed over some holes, followed by a coat of aotake - GSI Creos (Gunze) Mr. Color 57 Metallic Blue Green). Strictly speaking wheel wells could also be painted the cockpit color (blue-gray), but I really wanted to paint them in aotake. One more argument in favor of aotake is the fact that aforementioned Shoki wreck in China shows remnants of aotake inside the wheel wells. 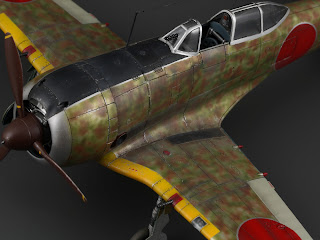 "The model was given a coat of GSI Creos (Gunze) Mr.Color 8 Silver and several layers of Alclad. Before spraying the camouflage colors thin masks of scotch tape were added around hinomaru and anti-glare strip. I used GSI Creos (Gunze) Mr.Color 129 Dark green (Nakajima) for the green mottle and the brown blotches were mixed from Tamiya acrylics XF-78 Wooden Deck Tan, 64 Red Brown, and 68 NATO Brown). 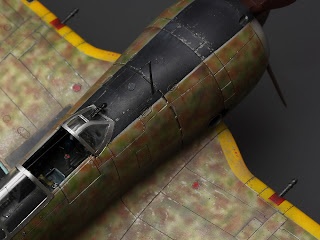 "After painting smaller details with a brush, the model was given a flat coat of Akan (a well known Russian producer of authentic paints). The post shading and weathering effects were achieved with airbrushing, Mig pigments and oils. Alluminum scratches were painted with a thin brush using Tamiya enamel. Akan semi-flat was used for the finishing coat. 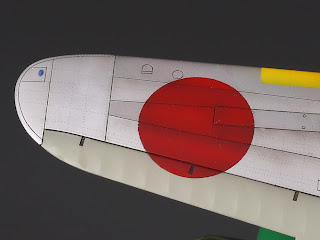 "After the final assembly (leading edge lights, antenna, etc.), minor corrections and toning surface with oil the construction was finished. 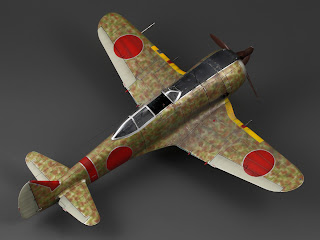 "Unfortunately I couldn’t avoid some mistakes. For instance the formation light on a rudder should be transparent. Air scoop above the engine is left blanked off because no reliable information regarding this part could be found."
Aleksei Kryukov 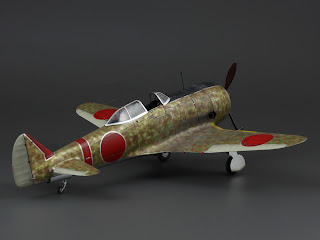 Hello Nick; I really admire Mr. Kryukov's excellent craftsmanship. The overall finish on this model is excellent. I especially like the complex exterior color scheme and the choice of blue-gray for the interior.
First Rate!
Kind Regards. noel

Beautiful work, Aleksei. Thank you for sharing it with us.

Aleksei asked me to thank everyone for commenting on his work. And special thanks to Nick for his excellent blog and research material, which helped Aleksei tremendously in his build!

Iskender (on behalf of Aleksei)

What an absolutely beautiful paint job and an inspirational piece of work. BRAVO!

This is an excellent piece of modelling art. The build quality and paintwork is top class! If this were mine, I'd be very, very proud of myself :)

Easily one of the finest builds I've ever seen. Simply remarkable. Thanks Aleksei and Nick.