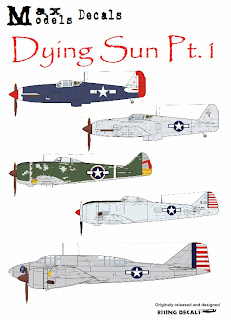 Back in July I mentioned that Rising Decals much sought after 'Dying Sun' sheets 72-005 and 72-007, featuring captured Japanese aircraft, were about to be re-released by Max Models. Well, the sheets are now available and Max Models kindly sent me samples to review here. Essentially sheet MM72-0100 features captured IJAAF aircraft whilst MM71-0101 features captured IJN aircraft. The sheets are not absolutely identical to the original as there are a a few minor detail differences and improvements. For example the Hinomaru and yellow lower rudder paint are no longer included for the Ki-44 subject, the US stars and bars now having the original Hinomaru showing as part of the decal, whilst the Ki-46 "Grim Reaper" emblems are now two-piece rather than one-piece and the white background decal has been omitted for the rudder stripes. The alterations present no difficulties however and otherwise the quality of the printing appears to match the originals perfectly.
Part 1 includes the following subjects:-
This is an excellent sheet that offers a number of interesting subjects for anyone interested in IJAAF and/or captured aircraft, as well as anyone planning to build a collection of TAIU birds. 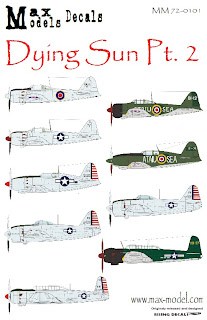 Part 2 focuses on IJN aircraft and contains the following subjects:-
This is another excellent sheet available again and I know the ATAIU-SEA examples will be  appreciated by modellers in the UK, especially as very clear IWM photographs provide guidance to their challenging worn and tatty appearance. I hope Max Models will consider re-releasing other Rising Decals sheets which are now out of production but highly sought after.
Image credits:- © 2012 Max Models with permission
Posted by Straggler 脱走兵 at 12:35

Thanks for the heads-up with these, Nick. There's some really interesting options here!

Thanks for the news, Nick.