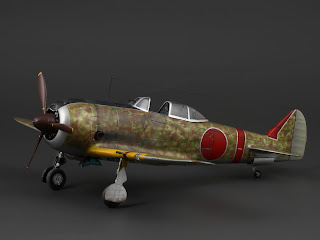 It is a very great pleasure to be able to share this description and photographs of Aleksei Kryukov's exacting build and beautiful model of Capt Yukiyoshi Wakamatsu's Ki-44-II Ko “Shoki” from the Hasegawa 1/48th scale kit in the first of a two part article courtesy of Iskender Mailibayev who also kindly provided the English translation. 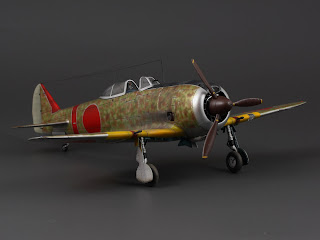 "The Ki-44 kit produced by Hasegawa in 1/48th scale cannot be considered well detailed or very accurate by modern standards, but nevertheless can be built into a beautiful model. I should start by saying that the construction process in general was hampered by the lack of information, especially on such important (from a modeler’s point of view) areas as the engine, cockpit and wheel wells. A fellow modeler, Iskender Mailibayev, shared available information on a Shoki.
"The following aftermarket sets were used in the construction process:-

"I chose the paint scheme of Yukiyoshi Wakamatsu’s Ki-44-II Ko from 85th Sentai. It should be noted that the kit instructions suggest  a single color for the upper surfaces, whereas surviving photos and color profiles in several publications show a two-color application. Also the hinomaru on the actual plane were slightly different in size from the kit supplied decals.
"Construction required certain modifications which can be generally grouped into cockpit, engine, wheel wells and landing gear. 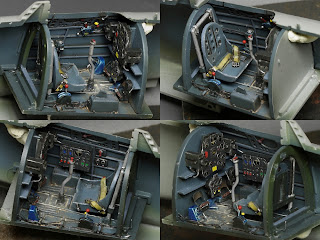 
"Photoetched details were used; various levers were detailed with “ball” handles made from superglue;
cables and rods imitated with thin wire; several parts were scratchbuilt; resin seat was used. Following recommendations the cockpit was painted dark blue-gray #3 (Hai-ai-iro). The color is a mix of Tamiya XF-18 (Medium Blue), 19 (Sky Grey) and 8 (Blue). After painting smaller details (black, metal, aotake), the surface was toned down with oil, followed by minor silver dry brushing, gloss coat, wash, flat coat and some Mig pigments on the floor surface. 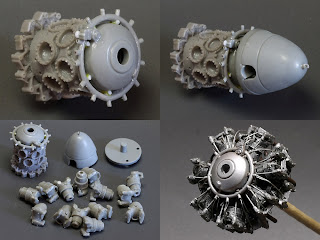 
"The kit’s engine is traditionally simplified and requires additional detailing or a replacement. As far as I know no aftermarket Ha-109 exists in 1/48, however in general it looks similar to Ha-25, which is produced by Vector. Crankcases are visibly different, the one on Ha-109 has a different shape and is larger in size compared to Ha-25. As a result I had to mate kit’s crankcase to Vector’s engine. The list of additional modifications to the engine is as follows: 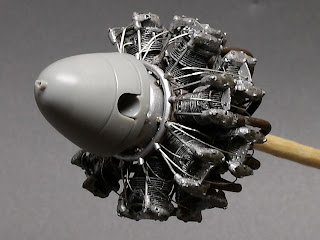 Wheel wells
"Wheel wells were modified in several stages. The list of modifications is as follows: 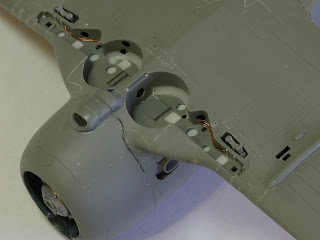 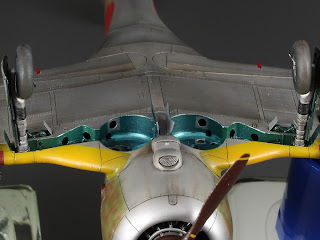 "To be continued . . . "
Image credits: All images © Aleksei Kryukov via Iskender Mailibayev
Posted by Straggler 脱走兵 at 09:01

Well, that is one beautiful model of a beautiful airplane! The colors used on the exterior and finish are superb.
Dan

Wow!! Wonderful!! Every time I look ata a Shoki, more I like it.
I didn´t know that Shoki interiors were blue.

Stunning display of the modeler's art at it's best! Bravo.

Inspirational! One of the nicest engines in 1/48 scale I've yet seen. But then *everything* looks good...

Hello Nick; Thank You for posting the photos of this outstanding model. I'm a 1/72 scale modeler myself, but I've seen built up versions of the subject kit at shows. This is far and away the best effort I've ever seen. Cheers, noel

Fabulous work Aleksei, and a useful guide for others. There is an after market resin Ha-109 engine set available in 1/72nd and 1/48th scales. The Engines & Things stock numbers are 72167 and 48132. Neither will be as detailed as the Vector example modified for use on your fine model. I have several E&Ts for use on 72nd scale projects, none requiring the last word in super detailing, as you have accomplished with your excellent build.