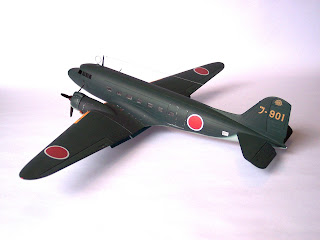 Continuing with the Tabby theme, Steve Nelson of Battle Creek, Michigan, has very kindly shared these images and details of his superb conversion of the 1/72nd scale Italeri C-47 kit to an IJN L2D2. This inspiring and excellent build is best described in his own words. 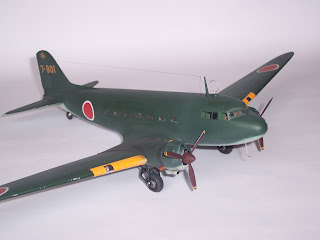 "This model was originally intended to be part of a j-aircraft.com group build for the IPMS Nationals.  That project never really came together, but I had become fascinated by the "Tabby" and decided to finish the conversion anyway.  I started with the Italeri C-47 kit, as it was the best Gooney Bird in 1/72 that could be easily found (the ESCI kit would probably have worked just as well, but it's been out of production for some time.). Detailed references for the Tabby are rather thin on the ground. The best is the old Maru Mechanic on the C-47.  The text is of course entirely in Japanese, but the book contains  some nice drawings and an exploded view of the L2D, as well as the only interior photos I've ever found. 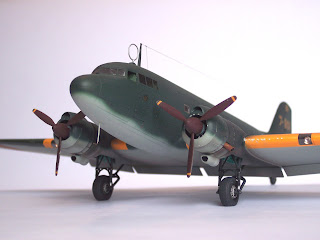 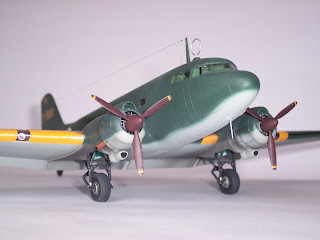 "I started by fairing in the original cargo doors and scribing new ones.  Many people assume that the "Tabby" was a copy of the C-47, but the Japanese actually independently developed their own cargo version of the DC-3, which they were building under license before the war.  This means the cargo doors were slightly different in shape and location.  I added the extra windows aft of the cockpit with some clear styrene, as well as a porthole window in the baggage door. The Navigator/Radio Compartment aft of the cockpit is largely guesswork.  There's only a single photo showing part of this area in the Maru Mechanic.  I only added it so the area wouldn't look empty through the windows.   The bulkheads and tables are sheet styrene, and the seats and radio set came from the spares box.  The instrument panel is a photocopy of the decal sheet from the Hasegawa G3M "Nell," and I added tape seatbelts. 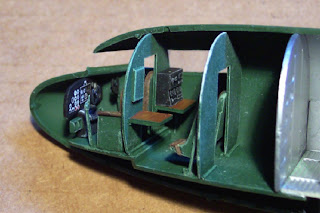 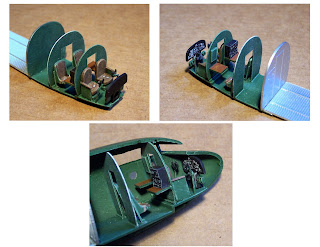 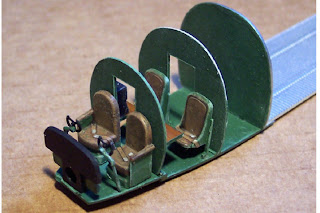 "The engines were the real "meat" of the conversion.  I cast Alumalite resin copies of the engines from the aforementioned Hasegawa "Nell," but I  had to create my own master for the cowls. I started with the original C-47 cowl, modifying the shape, reducing the diameter of the opening, and adding the intake on top.   I then made an RTV mold of the modified cowl and cast replacements.   I also made casts of the accessory section behind the engines, with a reshaped oil cooler.  The final parts were the result of many attempts and much trial and error.  I was able to cast the cowls with a hole through the center, but had to do the finish work by hollowing them out with a Dremel tool. The props are from the spares bin. I think they came from an Academy B-17G (which came with an extra set of narrow chord props intended for the earlier variants) and the spinners are cast resin copies of those in the Hasegawa G4M1 "Betty."  I finished off this part of the conversion with exhaust pipes made from aluminum tubing. As I mentioned, the "Tabby" was based on the DC-3, which has a slightly different landing gear design than the C-47, so I modified the kit landing gear accordingly. Why I went to the trouble I'll never know..but "in for a penny, in for a pound."  I used MV Products lenses for the wing leading edge landing lights, and made new light covers by heat forming clear sheet over the leading edge. Unfortunately, once the project was finished I discovered that the "Tabby" didn't even have them! However I decided discretion was the better part of valor and elected not to remove them and risk screwing up the project..especially since they came out so well. 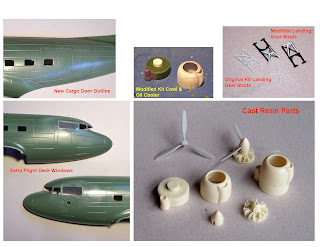 "The model was painted with Gunze acrylics. Simple IJN Green above and IJN Gray below, with orange-yellow leading edge bands. The Hinomarus came from the old IPMS sheet, and the data block and stencils from the spares bin. The tail markings were the biggest challenge. I was using a profile provided by the j-aircraft project leader. At the time I had access to a color laser printer at work so printing the codes and unit badge in yellow was no problem, but the translucent decals would disappear on the dark green background. Fortunately I have a friend with an ALPS printer.  I sent him the artwork and he was able to print up some opaque white decals for me to serve as a backdrop for the yellow. 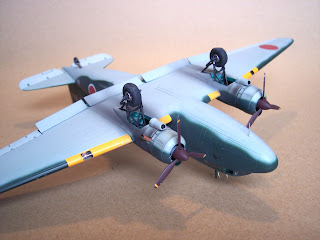 "Finishing touches included a scratchbuilt loop antenna and pitot tube, both made from wire.  I also used True Details resin wheels, and the flaps were robbed from a junked ESCI C-47 kit (because it was easier and quicker than scratchbuilding new ones.)  I entered the model at the 2006 IPMS Nationals as a stand-alone entry, but it didn't win anything.  However it took first place in Conversions/Scratchbuilt at the IPMS Region IV convention the following year." 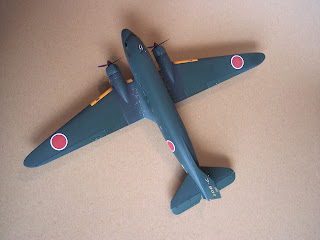 With grateful thanks to Steve for the pictures and description of his very fine Tabby model.

Very nice work, Steve. Thanks for sharing photos of it with us.

What wonderful work, thanks for posting it Nick.
Dan

Something special here - thanks for showing us the model! Glad you didn't mess with the landing lights, they are so convincing! The top view of the model is kind of chilling - it immediately brings to mind a well-known photo of a Tabby taken right before it was shot down.

What a great build and conversion, very inspirational. Makes me want to get the Tabby kit that's out rather than try and convert the Italeri kit.