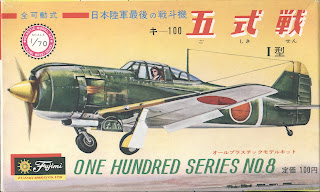 Back in October last year this blog featured the Aoshima Goshikisen - Ki-100-II kit - and at that time a companion piece on the Fujimi Goshikisen was intended to follow, but not four months later! The two kits are sometimes confused on modelling forums, with the Fujimi kit being attributed to Aoshima. In fact they are very different in terms of engineering and approach. The Fujimi kit was first released in Japan in 1965 as No. 8 in the 'One Hundred Series' with unique box art as shown above, depicting a 3rd Chutai (!) machine of the 111th Sentai lifting off. 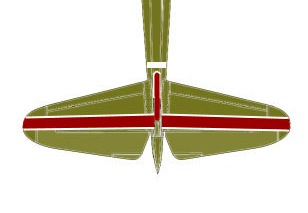 Incidentally, careful study of the best photographs of the 59th Sentai Ki-100 line-ups at the end of the war reveal that they did indeed wear that unit's unique and characteristic horizontal tailplane stripes (just immediately forward of the elevators) in the Chutai colours (as shown above on a Ki-43), in addition to their more visible and recognised diagonal fin and rudder band. Every Ki-100 kit and artwork depicting this unit has so far omitted this detail. 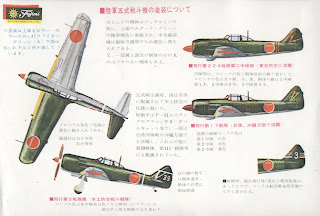 This original Japanese kit included a nice colour sheet with profiles and a brief description of the units equipped with the Ki-100 and colours, an addition not included in the subsequent kits. The decal sheet, however, consisted only of basic Hinomaru and yellow wing leading edge IFF strips with no unit markings. Whoever painted the box art and profiles had a better idea of the Kawasaki "green" version of JAAF paint colour standard # 7 on a polished airframe than many later depictions, perhaps because he had actually seen it. Both side panels of the box extolled the working features of the kit in LS style.

The Japanese export issues of the kit 7A8-100 bore only the Fujimi logo and appear to have been marketed with two boxings labelled both as 1/70th and 1/72nd scale. The one below, by an unknown artist, depicts aircraft '39' of the 5th Sentai's Hikotai leader, Capt. Yasuhide Baba and faithfully renders the Ki-100 factory scheme. 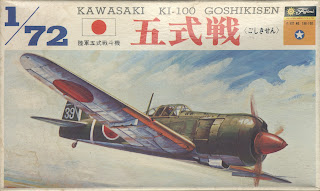 The other export releases all feature the art of K Hashimoto depicting a 59th Sentai Hombu (presumably) bird at the moment of take off as shown in the box art images below. Subsequent releases in similar boxes bore in addition the AHM (Associated Hobby Manufacturers) and Bachmann logos of the US importers (the latter kit becoming known as Fujimi-Bachmann). Those were now marketed as 1/72nd scale. All of the kits, including the Japanese original issue appear to have been moulded in dark green plastic. 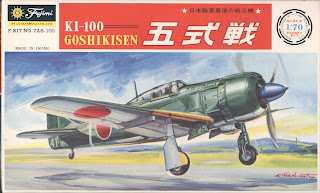 In the context of the time the kit is not as poor as is sometimes represented, the most detracting detail being the truly horrible and inaccurate windscreen. It had a greater parts count than the very simple Aoshima kit, with 32 parts and provision for moveable rudder, elevators, flaps and ailerons, together with a retractable undercarriage and opening canopy. In plan view the shape is pretty good with a commendable swell to the cowling sides and which fair into the fuselage more convincingly than the Aoshima kit. The cowl flaps are rather heavy and crude, being moulded as individual chunky rectangles standing proud of the airframe. The surface detail is a mixture of raised lines and rivets, best removed. When it was the only game in town and the only Ki-100 kit in the stash a Hasegawa Ki-61 was sacrificed for details and the carefully cut windscreen and canopy from that kit combined with the kit's rear canopy fairing to achieve a passable representation. Work was done on the rudder and other control surfaces to remove the non-scale working parts hinges and recesses. 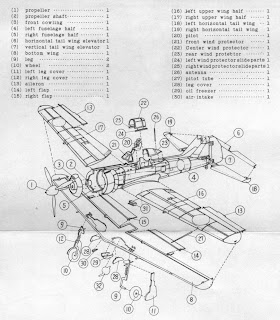 Kit instructions exploded view; note parts 31 and 32 for Ki-100-II, shown and included but not listed

The 32 parts of the kit included a Ki-100-II supercharger "worm" and wing leading edge air inlet, shown and numbered as parts 31 and 32 on the exploded view diagram but not listed as such. Curiously the original Japanese issue kit did not include these parts or show them, although the table of parts included two empty sections. Did Fujimi originally plan a separate release of a Ki-100-II? 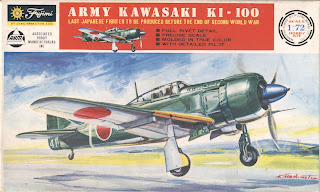 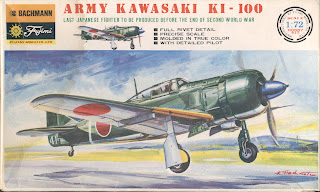 The UPC release of the same kit from 1966 made no mention of Fujimi on the box and had typical moody dawn or dusk box art by Andrew Scott Eidson (b.1908) depicting another 59th Sentai bird in an unlikely scheme of the sort now favoured by East European kit manufacturers for their "what-if" options. Inside the box the kit was identical to the other releases except for the instruction sheet which was new and marked as UPC 'HO Pocket Series'. The box, however, was marked as 'Flight Series 1/72 Scale'. The kit was described as 'Goshikisen - Ki-100-1B'. 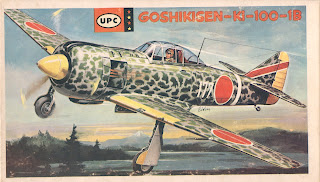 So, there you have it, Fujimi's Goshikisen, which is now perhaps, post the Fine Molds and RS Models releases, just a collectable curiosity unless you fancy a bit of retro modelling. An example of the kit as made up from the box can be seen on a German modelling blog here. They do still turn up occasionally on modelling forums where they are usually variously described as Aoshima or Nichimo but seldom as Fujimi!

Nick, I love these historical kit articles! Keep them coming!

Thanks and I certainly will.

Some scoff at them as having no place in serious modern modelling or research but I plan to continue to include snippets of relevant and rare historical detail in them where possible - so their loss!

Thanks for the box-art on the Ki-100!
About the exploded view of the Fujimi one, you remark the parts 31& 32-as not listed/not included. But I do remember having 'm and kept them as spare parts for a long time. I thought it was the Aosima kit I built in the mid-sixties. Now I am not so sure anymore.

Yes, I think I may have confused you. Those two parts are indeed included in all the kits except the very first Japanese issue (the heading image). They are shown and included in the subsequent issues but not listed on the parts list.

Nick I've really enjoyed these posts about older kits. As a kid, there was only one hobby shop in a neighboring town--which I only got to visit about once a year--that carried Japanese-produced kits. A fan of Japanese aircraft even then, I was very excited to own some of these vintage beauties back in the day.

Many of your articles and photos of beautifully-preserved kits and boxes have brought back some very happy memories, then. It's very interesting to learn the dates and details behind them and see the variety of box art, etc.

"Some scoff at them as having no place in serious modern modelling or research..."

History should never be scoffed at. You keep right on posting these articles about the history of the old kits and I will keep right on reading and enjoying them. If anything, it makes me appreciate the advancements made by the newer kits.

I remember I bought it at a hobby shop in Denver...and if I remember right, it was a lousy kit (poor rudder, especially).

But do I wish I would have kept it.

Thank you for the memories.

Thanks for posting those old Ki.100 kit box arts. Many were new to me.

Let those who scoff quaff the rejection of the model community not beholden to pompous modeling toffs! I have more fun improving many vintage kits than I do with the latest-greatest releases. Like an old house or car, they have more personality! Please continue to show us where our hobby came from.

any idea of the value of original Scott Eidson paintings of Japanese aircraft used for the model box pictures?

I have an original gouache painting by artist Scott Andrew Eidson done in the 1950's for the Universal Powermaster Corporation (UPC)of a Japanese Nakajima Ki-44 Shoki (Demon). I an not sure if the painting was ever used on a model box top.