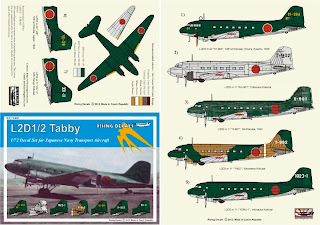 Following on from LAC Morton's description of that Tabby at Meiktila, recent releases from Rising Decals have included dedicated sheets for the L2D1/2 'Tabby' and Ki-67 Hiryu 'Peggy'.

RD 72-051 for the L2D1/2 has national insignia for one aircraft but a selection of tail codes for no less than seven examples. The sheet is intended for the Amodel kit but could also be used for models based on converted DC-3 kits - of which more anon. The subjects exhibit a variety of schemes known to have been used on this type and are well chosen:- 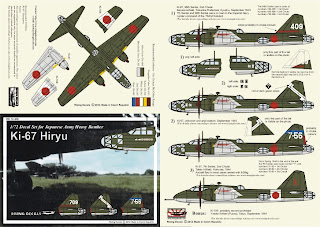 RD 72-053 for the Ki-67 Hiryu (of which also more anon) follows a similar approach with national insignia for one aircraft and tail codes or unit emblems for three and bonus markings for one Ki-109 Heavy Interceptor variant of the type. The sheet is intended for the Hasegawa Ki-67 kit but I hesitate to suggest as an alternative the old LS kit still available under the Arii label as that kit is to 1/75th scale and there is no guarantee the decals would fit appropriately without some adjustment. All of the examples are shown in the factory scheme of olive drab over grey:-

Thanks for posting a notice of these sheets, Nick.