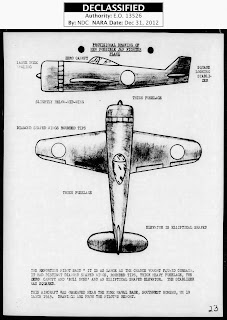 These layout sketches and details of a "possible new" Japanese fighter encountered by VMF-112 are from the unit war diary and date from March 1945. I've added a poll in the sidebar for votes as to what readers think they are. I don't know the answer but  it will be interesting to see what the consensus is! 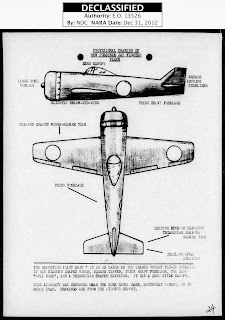 Ki-100 "wins" by a whisker over Ki-44. The diversity of perception is fascinating and there were comments about the possibility of Ki-115 and A7M too.

Image credits: War Diary of VMF-112 via NARA via  Ronnie Olsthoorn
Posted by Straggler 脱走兵 at 14:06

Nick,
The second drawing looks very much like a Ki-115 to me, mainly because of the wing, tail and elevator shape. I also think it funny that the canopy is called "Zero" style, yet it is much more like a Ki-44. The one outlier is the report saying the plane was the size of a Corsair....mystery plane indeed!
Dan

I also contemplated the Ki115 possybility because of the squared tail.
The overall description and aproximate dimensions (it was probably glanced from a raconaisance plane), led me to Kawanishi. I guess the propeller and posture on tall legs further influenced the comparison with the Corsair.

Thanks chaps! Unfortunately I cannot add Ki-115 to the poll at this stage.

I'm mindful that the proposal for Ki-115 Tsurugi was only made in March 1945 (the month of these sightings) and flight testing was not until three months later.

My own inclination is towards Shiden, due to the small canopy, wing position and especially as the encounter was near a naval base.

Interestingly, so far the poll is pretty much a draw! :)

By this date, one might think the Shiden would have been a fairly well-kown quantitiy, whereas the Ki-100 was apparently never properly identified by the Allies during the war.

The time frame is about right for the first flights of the later bubbletop version (though I don't know whether the location is reasonably close?), and the Ki-100 has somewhat of a "low mid-wing" appearance due to the fairings that replaced the Ki-61's radiator.

I wonder if a light-painted fin-rudder tip might have contributed to the "square-tipped" perception.