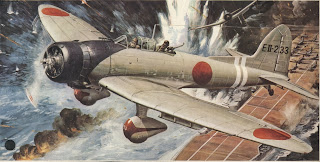 For anyone contemplating a build of the Aichi D3A1 in 1/72nd scale some extra detail in the cockpit interior will probably factor as a consideration, especially if the canopy is to be displayed in an open configuration. The brief review of the Dragon kit deliberately omitted reference to the observer's seat  as its unusual configuration warranted a more detailed treatment. All three (+1) available kits in 1/72nd scale provide only a seat for the observer and none of them depicts it correctly or completely. One has to look to the Hasegawa 1/48th scale kit for a presentation that more closely replicates not just the original seat but the complex seat mounting arrangement too - albeit in simplified form. There is a drawing of the seat mechanism in FAOW 130 taken from the engineering manual but viewed in line art profile it is a little difficult to work out what is going on. There is also a cutaway drawing in the same reference but unfortunately it does not show the seat arrangement clearly. 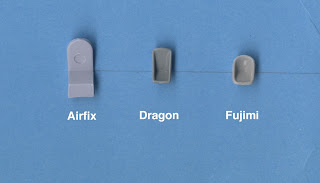 The Airfix kit has identical pilot and observer seats which bear no resemblance whatsoever to the originals, being merely supports for the Biggles Twins. By cutting them down, the addition of plastic card and re-shaping they can be made to better approximate the real seats but if the builder of the Airfix kit wants even a representative interior a lot of additional work lies ahead. As noted elsewhere the Dragon kit features incorrectly identical seats for the pilot and observer with the latter supported directly on the floor of the cockpit without any representation of the framework around the seat. The Fujimi seat is a better shape and unlike the Dragon kit it differs correctly from the pilot's seat. However it is also mounted directly onto the cockpit floor so will again need the fabrication of a representative support cradle. For those curious about the ZTS Plastyk kit there is an in-box review here. It is a clone of the Fujimi kit. Rather curiously the Airfix and Dragon kits do not contain a machine gun for the observer although they are shown deployed on the box art. The Fujimi kit contains a nicely moulded gun but no mounting provision and it is marked 'not for use' and not shown on the instructions! A suitable gun could be pinched from other kits or there are some aftermarket white metal and resin replacements available intermittently. 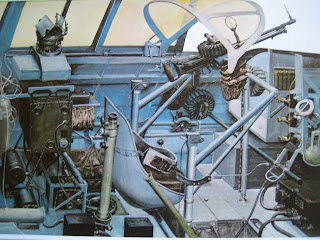 The Maru Mechanic schematic for the interior (shown above) also simplifies the framework around the observer's seat into a rigid construction (it was not) and there are other details which are crudely or incorrectly depicted. The observer's seat was a bucket type, slightly smaller than the pilot's seat and with the seat pan designed to hold the parachute pack. It was supported on a transverse bar between two vertical hydraulic arms fixed to the cockpit sides on pivoting locking brackets, so there was no attachment to the cockpit floor beneath the seat. The seat could be swivelled through 180° on a central spindle on the transverse bar to face the rear. The hydraulic supporting arms could be compressed to raise the seat from the lower front facing position to the higher firing position and unlocked to allow them (and the seat) to swing rearwards in order for the observer to raise his gun to the near vertical if required. The gun mounting itself was on a 'Y' yoke from the top of each hydraulic arm to a single central support fixed to the cockpit floor behind the seat. This central support had an articulated bar on which the observer placed his feet. The whole arrangement formed a kind of tubular cradle around the seat that none of the 1/72nd scale kits has attempted to replicate. For those modellers who do not have access to a 1/48th scale Hasegawa kit the instructions (shown below) may help in visualising how the seat was actually supported (together with other missing cockpit details from the 1/72 kits). 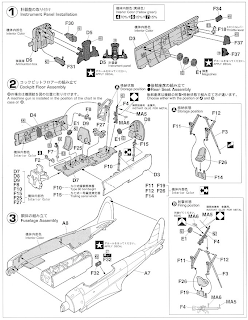 When not in use the machine gun was stored vertically on the left side of the cockpit as shown in the Hasegawa instructions. To go into action the observer had to open his canopy, raise and turn his seat, unlock the arms to allow the seat to swing then mount and arm the machine gun. The rear machine gun in the D3A1 was the Navy Type 92 7.7mm flexible machine gun, a license-built variant of the British BSA built Lewis type light machine gun so guns of that type could also be used for a 1/72 model.

Airfix suggest an unlikely combination of Humbrol paints with matt black (33) for the cockpit "floor" (actually the bottom of the fuselage) and matt middle blue (89) - Maru Mechanic inspired? - for the cockpit sides with matt aluminium (56) for the seats. Fujimi suggest "Gunze"/GSI Creos paints gray (H22) for the two seats and "metallic blue green" (H63), presumably aotake, for the rest of the interior. The seriously flawed Dragon instructions provide no suggestions at all for the interior colours. The Hasegawa 1/48th scale kit suggests a mix of "Gunze"/GSI Creos paints - 70% yellow (H4/4) + 15% green (H6/6) + 15% brown (H7/7) to make "yellow green". I have not tried this but envisage it would result in a "light olive green" (Thorpe's N5 approx. FS 34151) or "buff green" (Thorpe's N6 approx FS 14255) similar to the much touted "Nakajima interior green" paint colour. Robert C Mikesh (Japanese Aircraft Interiors 1940-1945, Monogram Aviation Publications, 2000) also reports a "yellowish green" interior colour which he unaccountably compares to (Thorpe's) N2 - a dark green.

The FAOW cutaway depicts a pale green - similar to the Tamiya XF-71 IJN cockpit green colour. There are artifacts knocking about which show colours ranging from a light apple green, through a slightly blueish green to a definite olive green. Some further colour notes may be found here and here. 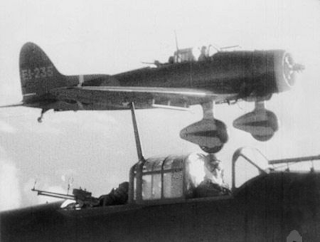 Thanks for these additional comments, Nick.

Good job about Val's seats .... But, I've the Fujimi's Val sprues before my eyes now....and there is a part numbered 20....and this is very well moulded Lewis gun in the Fujimi kit 8-) And the ZTS-kit have it also...

You are quite correct. The kit does contain a part for the gun but it is not shown in the instructions and there is no provision for mounting it. If you look at the sprue layout diagram you will see that part is marked "not for use" so I suppose it might be intended for the D3A2 kit (not to hand)?

I will amend the blog to clarify that though, thanks.