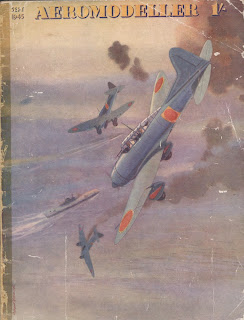 Although C Rupert Moore's trio of plunging Aichi D3A2 'Vals' on the cover of the September 1945 Aeromodeller magazine appear to be painted a lovely blue-grey colour I suspect this is no more than a printing anomaly as otherwise they appear identical to the illustration in John Stroud's 'Japanese Aircraft' (The Harborough Publishing Co Ltd., 1945) which was advertised in a two page spread in the same magazine. That unattributed illustration (probably also by C Rupert Moore) depicts a D3A2 in a slightly blueish-green upper surface camouflage with the same rectangular yellow surrounds to the fuselage Hinomaru and red elongated diamond-shaped flashes on the wheel spats. The same shift to a blue-grey has occurred with my scan of the Stroud illustration (below). We know better now - or think we do - so should we ever replicate those old and now largely discredited depictions of Japanese aircraft? The Bald Eagle in me frowns and says "No, certainly not!" but trust me, it's a lot of  fun.

C Ruper Moore used skeletal framework models made from card, consisting of a flat central profile with correctly spaced ribs which he suspended from the ceiling of his studio in the chosen position and appropriate light, from which to paint his aircraft. He did this because he said that the underlying structure allowed him to better appreciate the shape and form of the aircraft. This was a far cry from CGI or 3D modelling but resulted in a simple purity of form that at first glance nowadays might look naive, if not crude. However it had a close affinity to the aero-modelling styles of 60 years ago where the pure aerodynamic form (and flight) of the aircraft was more important than panel lines and pre-shading. I doubt that he made three Val models in different scales so that cover art probably represents one model, hung up in his studio and drawn three times to make the composition. He perhaps drew inspiration from one of his own (?) small vignette paintings in the Stroud book as his Aeromodeller cover art depicts a similar high-level dive amidst flak bursts onto a distant aircraft carrier. It is wonderfully evocative of Val, her purpose and her record, although perhaps more representative of a late-war Special Attack where there would be no pull-out and no return to base. 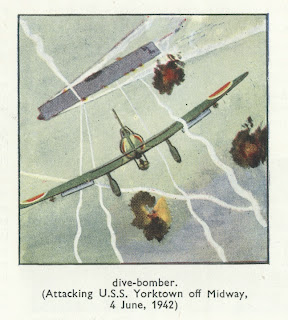 Aichi's D3A 'Val' (in Japanese Kyu-Kyu Shiki Kanjoh Bakugeki-ki - 九九式艦上爆撃機 - 'Type 99 Carrier-based Bomb-attack machine', usually abbreviated to Kyu-Kyu Kanbaku -九九艦爆) doesn't seem to be as popular a modelling subject as Kate but is generally well regarded as an effective if somewhat underrated dive bomber. She can look a bit clunky sitting spatted on a carrier deck, pugnacious with her squat, square canopy and closely clutched bomb load. But raise her aloft into the sunlight and tilt her into that characteristic 60° dive angle and suddenly she becomes a predatory bird of deadly beauty, her spats like talons. A slightly portly Stuka without the kinky bits. Model Vals displayed that way, tilted on a stand with the bomb cradle a-fling and a miniature crew always look good. 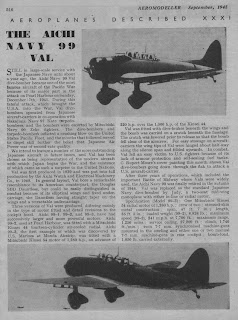 There is a two page spread on the type in that 1945 Aeromodeller with a rather good looking plan (considering) of what is described as the 'Aichi Navy 99-2 (Val 2) in what appears to be 1/72nd scale by an anonymous draughtsman. The write-up is surprisingly complementary, with none of the contemptuous propaganda that sometimes infused appraisal of what were so recently enemy aircraft. Here we have remarkably comprehensive and fairly accurate coverage in a modelling magazine barely a month after the end of the war. I wonder how many, if any, miniature balsa Vals took to the air over the Home Counties as a result of that article? It was another 19 years before a miniature plastic Val was to appear. 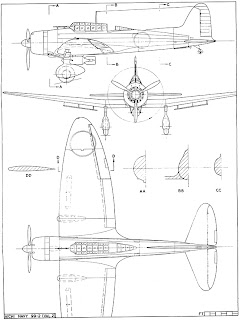 My first Airfix Val sought to emulate the box art with a gunner pinched from the Arado 196 kit blazing away from the waist up with a .50 calibre Browning pinched from a 1/76 armour kit. Not being enamoured with that 'boring' light grey scheme my Val sported a finely mottled light and dark green finish more appropriate to an Army aircraft. Surprisingly the original crew, two handlebar moustachioed 'Biggles' characters with carefully arranged cravats whose stiff upper lips appear to have spread to embalm the whole of their sedentary forms, have survived to the latest Airfix re-issue. Every time I see them I think of a clipped chorus of "Hello!" from the escaping RAF duo in the sitcom 'Allo 'Allo'. Whatever are they doing in a Japanese dive bomber? Mind you when they first appeared in Airfix kits those pilot figures were pretty impressive compared to the troglodyte 'Invaders from Mars' with their huge coat buttons which had gone before.

After Airfix there was Fujimi, cloned by Plastyk. And a couple of odd-scale Japanese kits from Bandai and Tamiya before Fujimi and Hasegawa addressed the type competently and then excellently in 1/48th scale. Which in a roundabout sort of way brings us to the recent Cyber-Hobby (Dragon) Val...

With thanks to Ronnie Olsthoorn for cleaning up the Aeromodeller plan.

Hi Nick, what a wonderful piece. yet another one of my "holy grails" is a 1/48 D3A2 model, as there are none. Along with a Ki-46II, both very important types that have been utterly ignored in my chosen scale.

I agree that the Val was a very graceful looking aircraft. And the D3A2 had just enough aerodynamic improvements to make her look even more like a bridge between the pre war biplanes and the late war high performance attack types.

Thanks for the write up, Nick.

I loved this one. The pilgrims along this particular Grail road were many, and the kit was enticing. I believe I read somewhere that it was John Edwards' project at Airfix, and that he had only a sliver of information - I can believe that! It was commendable and a bold choice. So much needed fixing though, and though I kept returning to that kit, it got the best of me, and on not being able to fix the canopy I surrendered; kit's just got too many problems, blah, whinge, whinge.

The answer to all that can be found on this blog: http://www.aviationofjapan.com/2010/04/john-wongs-airfix-d3a1-val.html

"It's hard to believe that the Airfix 'Val' lurks under that stunning model but the result is a tribute both to the honesty of Airfix's basic kit and John's superlative modelling skills." Check it out again. How'd he do that?