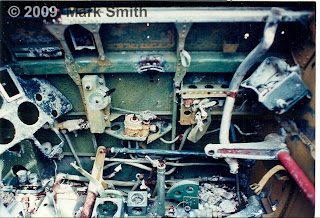 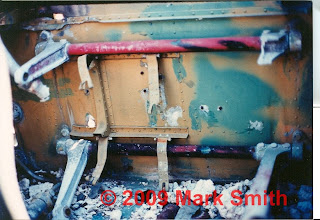 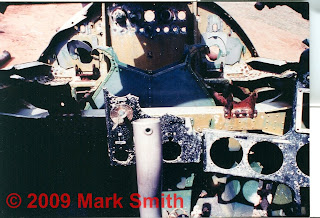 Continuing our exploration of the pilot's cockpit in the Aichi dive-bomber, Photo 1 shows the starboard side of the position with the seat mounting frame visible to the right of the image.
Photo 2 shows the bulkhead behind the pilot with the seat mounting frame and what appears to be an equipment rack.
Photo 3 is another view forwards, through the instrument panel towards the engine firewall, showing the ammunition magazine for the cowling mounted machine guns. The instrument panel has been dislodged to the right. The rusted mounting brackets for the machine guns may be seen and the corresponding apertures in the firewall.
On the question of just what the interior colour was, before commenting on the appearance of the colours in these photographs, let's look first at what has been reported elsewhere.
Ryan Toews reported that in his examination of artifacts from a D3A2 s/n 3178 he had matched the interior paint as a green very close to FS *4062. He suspected that this was a "somewhat bluer variation of the similar paint (FS *4095)" found on the Nimitz museum D3A2 by Greg Springer. Greg suggested an alternative colour of FS *4102, available in a number of hobby paint ranges, as an acceptable representation for *4095. A comparison of the colours does not support the notion that *4062 and *4095  are just variations of the same or even similar. As the attached swatches illustrate, the colour families appear quite distinct and different; the DE2000 difference calculation being 14.7 (where 2.0 or less = a close match).
Greg has commented that the yellowish "zinc chromate" colour is a pigment "leaching" from the original paint as a result of degradation, rather than a separate, painted on colour. If that is the case it might explain the residual strong blue-green chroma as a shift from an original, more olive green, but some scientific evidence is needed for this.
A well-known photograph of another artifact, the ammunition magazine for the cowling guns from a D3A1, appears to show two greens. One of them, not dissimilar to FS *4062 and another, paler green. Unfortunately this artifact has not been measured and it is not clear which of the greens may represent the original colour and which the "leached", degraded or fire-damaged shift.
With Special Thanks again to Mark Smith for sharing these unique images with us but Special Thanks also to Ken Glass whose expertise, legwork and expenses all contributed to turning the original colour prints (wherein lies another tale to be told in due course) into the digital images that you see on these pages.
To be continued . . .
Images credit: All photographs © 2009 Mark Smith; Rendered colour swatches © 2009 Straggler.
Posted by Straggler 脱走兵 at 12:19

I would think the two D3A interior colors cited by Ryan Toews and Greg Springer are in fact different. The 4062 swatch appears similar to (but a shade or so lighter than) the exterior color of the D4Y tail fin I photographed in the mid 1990s. The 4095 and 4102 swatches appear closer to, but not quite the same as, what have long been considered IJN interior colors.

I have examined or own over twenty different samples of Aichi KanBaku and Suisei remains. Around six to eight differnt relic examples were recovered from PNG/SOLs by Dr. Charles DARBY or William BARTSCH and sent to me by them. These show a variety of paint schemes/colors... both field-applied and factory-applied. The sample with the lowest AICHI serial number (a D3A1) was NMF on the lower surface and field-applied dark-green on the upper surfaces (no primer) and another had painted aluminum lower surfaces on the lower surfaces and dark-green on the upper (also with no primer coat). Yet, all the examples of D3A2 I have examined have the red-oxide primer paint as a factory application!

All relic examples of the D3A1 recovered from the PEARL HARBOR attack (that I own or have examined) and the one from the attack on DARWIN (19 February 1942) had no evidence of primer paint under the exterior olive-gray or "grey-poupon" paint! The KanBaku examples on display at the FORT DE RUSSY Army Museum and in the archives of the ARIZONA Memorial do have red paint under the exterior paint coating, but this is not the flat red-oxide primer found on later samples, but rather a glossy red paint which is probably evidence of the "red-tail" markings from the pre-war period. All fabric surfaces examined were painted aluminum with the exterior olive-gray or "grey-poupon" layered coarsely on top by brush. Soon I hope to have color chips and photos of one of the wing surface-areas of a KanBaku, including the hinomaru, from the DARWIN attack souvenired by one of the AUSTRALIAN members on the crash-recovery team.

The colour chips here (so far) represent only the FS values cited by Ryan Toews and Greg Springer as matches for the interior paints - not the exterior paints.

Notwithstanding the evidence from your relics, this particular aircraft appears to have the red primer coat top and bottom - unless there is another explanation for the extensive areas of red on the airframe.

The Val on display at the NIMITZ Museum pictured by the Reverend Mark SMITH is of the D3A2 (Aichi Type 99 Model 22, s/n3105) and is representative all those later production (post February 1942) KanBaku which had the primer coat applied over all surfaces at the factory. None of the earlier KanBaku relics documented by model and/or serial number and/or date of recovery have the red-oxide primer paint applied.

KanBaku (D3A2 Aichi s/n3105) was found at GASMATA New Britain I. and shipped to the NIMITZ Museum in 1974. DARBY first documented this wreck in his book (p.37).

Very interesting photos! Color is definitely not atoake as Cyber ​​Hobby suggests! It would be interesting to capture the rear gunner's seat and its equipment.